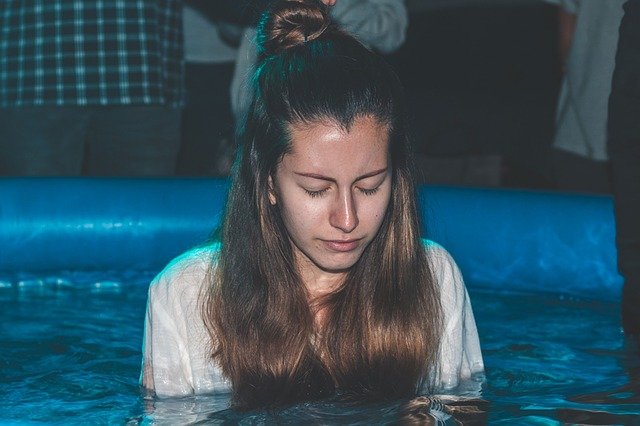 SODDY-DAISY, Tenn. – A woman who said a deputy from the Hamilton County Sheriff’s Office promised leniency if she allowed him to baptize her has died. However, her case is not over.

Authorities did not disclose a cause of death and autopsy results are pending. She was reportedly scheduled to appear in court on Monday for drug charges.

Although she has passed away, her attorney Robin Flores said her lawsuit is still viable, according to Law&Crime.

“Her deposition has already been done,” he told WSMV. “Her testimony is preserved.”

A key factor, he said, is whether her two children want to “fill her shoes” and take the case forward.

The civil suit alleges that former Hamilton County Deputy Daniel Wilkey stripped himself to his underwear and Deputy Jacob Goforth allegedly failed to step in, instead recording the baptism on his phone.

“I think the history of it in the media will show that a baptism by a police officer in the line of duty, in exchange for leniency in a criminal case is beyond the pale,” Flores said of his late client’s allegations.

We've asked the TBI if they suspect foul play, we're waiting to hear back.
The Hamilton County Medical Examiner's Office will conduct an autopsy.

Wilkey was placed on paid administrative that year amid a slew of lawsuits for this and other incidents. He was indicted in December 2019 on charges that included rape, extortion, stalking, and assault. He resigned following the criminal indictment, the New York Times reported.

He pleaded not guilty in the case, according to News Channel 9.

CHATTANOOGA, Tenn. – A woman who claims that she allowed a Tennessee sheriff’s deputy to baptize her based on his promise of leniency can continue to pursue her lawsuit against another deputy who witnessed the “desacralized rite,” a federal judge has ruled.

In his April 7 opinion, McDonough said Riley could pursue two claims under Section 1983 of the Civil Rights Act. They are:

• That Goforth failed to prevent an improper endorsement of religion under the First Amendment.

Deputy Daniel Wilkey, allegedly detained Riley during the February 2019 traffic stop and had performed the baptism at Soddy Lake.

The incident unfolded after Wilkey pulled Riley over in the driveway of the home of her former mother-in-law. He asked Riley what she had in the car, and she confessed that she had a marijuana roach, McDonough said.

Wilkey told Riley to get out of her car, searched her for about 20 seconds and handcuffed her. During the search, Riley alleges, Wilkey inappropriately touched her crotch and asked her to pull up her shirt and shake out her shirt and bra. Wilkey found a marijuana cigarette on Riley but found nothing else in her car.

Following the search, Wilkey asked Riley whether she had been baptized. He allegedly told Riley that “God [was] talking to him,” and he would write her only a citation if she got baptized. He also allegedly said he would speak on Riley’s behalf in court if she went along with the plan.

At the time, Riley testified, she thought that Wilkey was “a God-fearing, churchlike man who saw something … in [her], that God talked to him,” and “it felt good to believe that for a minute.”

Riley went inside her former mother-in-law’s home to get towels for the ritual. When the woman asked why, Riley replied, “I guess I’m fixing to get baptized.”

Riley followed Wilkey in her car to Soddy Lake. En route, Wilkey called Goforth to the lake to witness the baptism. Goforth didn’t know that Riley had been cited for a criminal offense until he arrived. Goforth also claimed that he asked Wilkey whether he had thought about the baptism in an effort to get him to reconsider, but Wilkey wanted to proceed.

When preparing for the baptism, Wilkey allegedly told Riley that he would “strip down to my skivvies,” but she should leave her clothes on. Wilkey “removed all his clothing except his underwear and T-shirt,” while Riley removed only her shoes.

Wilkey submerged Riley in the water, while Goforth recorded the event on his cellphone.

Riley contended that Goforth smirked at her, an allegation that he denies, and said she knew at that point that the baptism had nothing to do with God. Rather, it “had something to do with power and control.”

McDonough said Goforth was not protected by qualified immunity because his failure to intervene violated clearly established rights.

Even though the facts of the case were unusual, that doesn’t mean that Goforth is protected, McDonough said.