It's time to change it 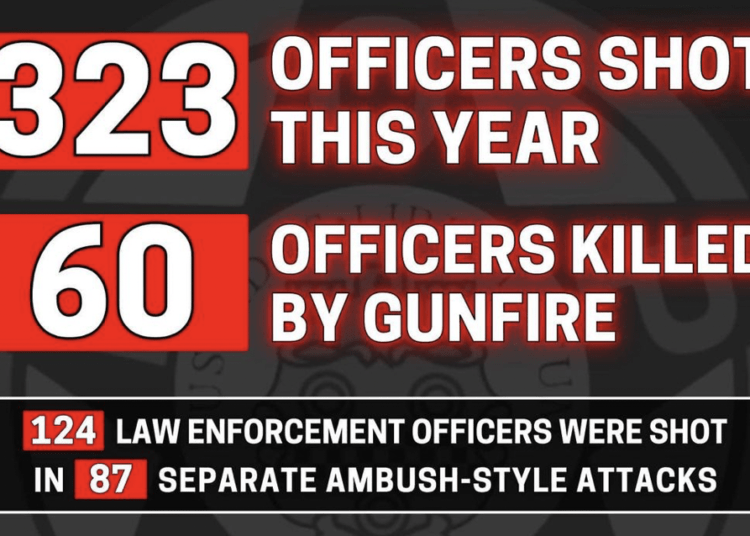 While multiple media outlets report on shootings involving police officers and several databases exist to track officer involved shootings, you’d be hard pressed to find them discussing the rise in violence and deaths among those wearing the badge. In fact, as a few outlets such as Law Officer report on the line of duty deaths from 2022, many in the corporate media will run opposing articles downplaying the facts in front of anyone paying attention.

Fortunately, the Fraternal Order of Police along with National President Patrick Yoes, continues to bring to the forefront the increased dangers within the profession and the preliminary report is not good.

Calling 2022, “one of the most dangerous years for law enforcement,” Yoes directs the blame on the increased violence to the “criminals emboldened by the failed policies of pandering prosecutors and cynical politicians.”

The National Fraternal Order of Police has been tracking the data since 2015. 2021 was the most violent year and with days left in the year, 2022 could break that record.

Yoes calls the current violence “unlike anything I’ve seen in my 36 years of law enforcement” and I agree with him. This has to change and I am committed to doing whatever I can to reverse it.

Some in the media and even within some agencies will lament that violence directed towards law enforcement is simply “part of the job.” I’ve had more than a few scumbag activists tell me that if cops don’t want to die, then they shouldn’t have taken the job. This may shock you if you don’t play in these circles but I have and this attitude is there.

It’s there in every decision by a politician that advocates “reforms” that make the streets more dangerous.

It is there in judges that release violent criminals back on the streets.

And it’s apparent for anyone that has seen the dramatic rise in crime in cities.

This Can Be Stopped
I want to be clear to everyone reading this. Law enforcement is a dangerous job and we will never see a year without tragedy but the level that it is happening right now is not normal so we need to stop normalizing violence towards law enforcement and our profession needs to stop accepting it.

I don’t expect activists and politicians to change but there is plenty that we can do in the law enforcement profession and that is training.

I’m not talking about “check the box” training that your state or your local politician demands. I’m talking about legitimate officer survival stuff and yes, I’m talking about warrior training because it’s going to take some warrior stuff to overcome close to 100 ambush attacks on law enforcement last year.

I AM HERE AS SERVANT: MY NAME IS WARRIOR

For all you “triggered” by that word that aren’t in the profession, I don’t care because your feelings have nothing to do with reality. You can start with educating yourself on what it means rather than what you believe. If you are a chief of police and you have told your community that you have eliminated “warrior training,” you are also part of the problem and you are lying by omission. Because the next time an active shooting happens or your officer faces a psychopath with a gun, you expect that “warrior” mentality to emerge and you would fire the officer for cowardice if it didn’t.

“A Warrior is a courageous and fearless who remains prepared both mentally and physically. A Warrior is self-motivated and possesses a mindset that they cannot be defeated. A warrior defends, protects, and sacrifices for the good of others.”

Are You Ready?
As we enter 2023, we have a choice. We can individually and collectively decide to never repeat a year like 2022 or we can continue the status quo and I’ll be writing this same article in 12 months.

We can all do something and I will.

I’ve provided a seminar for many years called “Seconds For Survival” and it’s been very effective. More than a few cops have come back to me and told me they thought the training saved their life and I think it’s time to make sure everyone gets this information.

Not every agency or officer can come to the classroom and while that is the most effective means of delivery, I need to do more.

I’m not a fan of putting everything out in the media or even a law enforcement website because most cops aren’t going to see it but does your agency have an internal training portal? Does your union have a newsletter? Do you know a conference that needs a speaker?

I have plenty of training dates scheduled across the country in 2023 so at the moment, I’m not sure how but this time next year, I want every cop in America to have more tools to survive.

If you can help, reach out to me here and let’s work together to make the profession much safer than it is at this time.

Travis Yates is a commander with a large municipal police department and author of “The Courageous Police Leader: A Survival Guide for Combating Cowards, Chaos & Lies.” His risk management and leadership seminars have been taught to thousands of professionals across the world. He is a graduate of the FBI National Academy and Doctoral Candidate in Strategic Leadership. You can subscribe to the SubStack: Courageous Leadership with Travis Yates here.