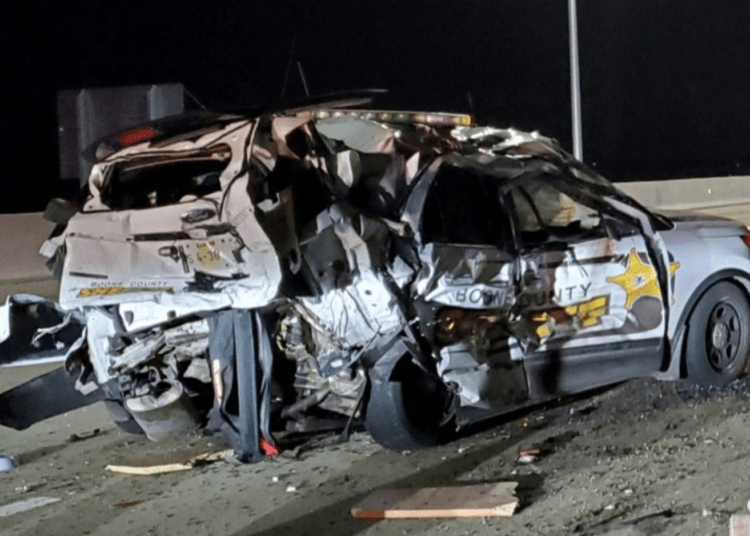 Wrong-way drivers crazily rocketing on interstates and other highways and byways persist in America, and our nation’s valiant law enforcement officers exemplify their oath by placing themselves directly in the path of these human-steered projectiles.

Many are impeded by cruisers operated by courageous cops, saving an untold number of lives by blockading with police cars. Some of the self-sacrificing hard hits result in dead law enforcement officers.

On March 9, 2021, a police cohort in my neck of the woods, Tampa police Officer Jesse Madsen received radio communications regarding a wrong-way driver barreling southbound in the northbound lanes of I-275. Despite having just concluded his tour of duty, Officer Madsen heard the broadcast and directed his police cruiser to the trajectory of the speeding wrong-way driver. It was close.

Per the Tampa Police, its dispatchers “began receiving calls about a white vehicle” driving the wrong way at a “high rate of speed and swerving through lanes.”

Officer Madsen spotted it. He activated his red/blue emergency lights, flashing brightly in the 1 a.m. wee hours. To no avail…

“Within one minute of the original call, the white sedan crashed into Officer Madsen’s police vehicle between the Hillsborough and Sligh Avenue exits. The impact killed both Jesse and the driver of the white sedan. Jesse moved his police vehicle into the path of the wrong-way driver to save the lives of others.”

He perished right where his final duty transpired, heroically in action so that anyone behind him (ahead of the wrong-way driver) was salvaged. I-275 is a corridor feeding into downtown Tampa, where gobs of people are pretty much present all hours of the day, with robust nightlife socials going on. This head-on collision was a few exits away from the bustle of unsuspecting humans. It was also nearing the junction of heavily traversed Interstate 4.

Officer Madsen, a former U.S. Marine, a husband…a father of three children, had served the citizens of Tampa for 16 years, during which he garnered eight Life-Saving Awards. The eight one was posthumous. 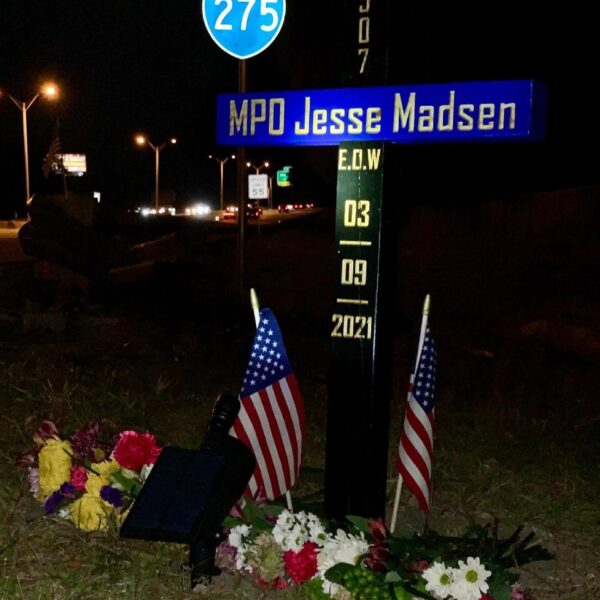 The National Police Association published a piece on Officer Madsen’s final dutiful act. In it, I contained a passage regarding another Tampa Bay area LEO who perished the exact same way due to exact same circumstances occurring in the same area and in the same month of March, only five years earlier:

In March 2016, Hillsborough County Sheriff’s Office Deputy John Kotfila, Jr. was on Interstate 75 (parallels Interstate 275 where Officer Madsen was killed) and was struck head-on by a wrong-way driver who was subsequently deemed intoxicated.

The synopsis upon the pages of the Officer Down Memorial Page emphasized absolute life-saving measures:

Deputy Kotfila “was returning to the station after investigating an unrelated traffic accident when a drunk driver entered the expressway heading west in the eastbound lanes. The driver in front of Deputy Kotfila was flashing her headlights, trying to get the vehicle to stop or turn around. Deputy Kotfila sped up, passed her car, took the impact of the head-on collision, and saved the life of the female driver.”

In Tampa Bay, increasing reports about the phenomena of wrong-way drivers encountered by courageous cops circulated among media channels and resounded in roll-call rooms. Police officials strategized and heightened DUI enforcement. The state Department of Transportation evaluated potential contributors. Ultimately, though, drunk drivers are the common cause, not necessarily poorly engineered transportation arteries.

The CHP bulletin portrayed a crumpled cruiser, along with an admonition to not drink and drive:

“CHP – San Francisco officers risked their lives to stop a DUI vehicle driving the wrong way, by intentionally positioning their CHP patrol car into its path. The officers and one member of the public sustained minor injuries, but the situation could easily have had deadly consequences had the officers not willingly placed themselves in harm’s way. Please never, ever drive impaired – it’s simply not worth it.”

In Colorado, a state trooper responded to reports of a wrong-way driver and searched the expressway. That reckless operator rounded a bend and found him, fast!

According to a Colorado State Patrol (CSP) spokesperson, “A wrong-way driver [operating] under the influence and at full speed nearly hit our patrol car that was trying to intercept it. Watch the [police dash-cam] video (edited for time, content) of what was nearly a disaster when you don’t stay in your lane.”

As the trooper exits his patrol vehicle and advances to figure out what/who the heck is generating gobs of chaos with enormous potential catastrophe, he comes upon a young woman behind the wheel, whose faculties were, well, likely doused with alcoholic beverages. Here…watch this 2-minute first impression:

Both the trooper and the wrong-way driver, now standing in a lane marked Expressway (which, with a clear mind, would have questioned why it was upside-down), were highlighted by oncoming headlights. This is when, where, and why a state’s Move Over Law must be crucially abided.

By agency protocol and a heap of other logic, law enforcement officers refrain from operating police cruisers in opposing lanes of travel (countering Hollywood’s in-your-face portrayals).

In reality, we’ve witnessed police pursuits whereby the bad guys barreling down Main Street (or wherever) suddenly cross medians, intentionally driving against the flow of traffic.

Theoretically, these chicken-playing malfeasants disregarding the sanctity of life operate on the notion that cops have certain prohibitions specifically relating to pursuits. Thus, they seek to seize the would-be advantage.

Hugely tragic circumstances defer to exceptions to the rule. With wrong-way drivers carving a pathway toward surreal destruction, cops have no choice but to engage the careening culprit with swift-changing strategies and tactics…while their minds are reeling from myriad things which could also go wrong, all in nanoseconds.

The Colorado trooper located the wrong-way driver and activated his equipment to magnetize the operator’s attention. She snaked on by like a slippery eel. He about-faced and chased her down (protocols and policies be damned) until she seemingly sighted his red/blue lights flashing, sidling close to the concrete median, forgetting to place it in Park, adding another charge to the mix of highway hijinks.

At significant risk to himself, the trooper was close enough to intervene and cease any chance of catastrophe. But this is not always the case…

In late-August 2022, another wrong-way driver coursing onto the exit ramp of the Palmetto Expressway in Miami, Florida, slammed into a Honda transporting five people, none of whom survived the crash.

Given the fact that this wrong-way disaster was caused by a drunk driver who just got on the expressway and rather immediately collided with others who likely never anticipated any contrarian flow of traffic, law enforcement professionals were unable to intervene. They were on the way, to no avail.

These are the ingredients that factor into a cop’s psyche, perhaps infinitely rehashing that entire obliteration in which life was horrifically stolen.

Having been in those duty boots several times throughout my police career, I can tell you there are LEOs who introspect and silently render prayerful atonements, blaming themselves for not having been ubiquitous enough to preempt the carnage. And some citizens want less law enforcement?

Despite not being able to have a cop on every corner valiantly placing themselves in harm’s way on others’ behalf, video surveillance is omnipresent nowadays. Several Miami-area businesses captured footage of the climactic collision and furnished it to FHP’s traffic fatality investigators (TFIs).

TFIs become adept at traffic crash reconstruction: precipitating factors chronicling the lead-up and aftermath of life-ending automobile crashes are meticulously culled by these pros, a police specialty that insurance companies rely on for conclusive evidence-based reports.

In modules on traffic crash investigation taught at police academies, rudimentary context is studied. However, the complexity of physics and calculus inherent in traffic crash reconstruction imparts how dreadful some automobile collisions can be, hence the core curricula for LEOs looking to become certified experts in traffic fatality investigations.

Besides all the meticulous mapping done by law enforcement officers specially trained in recreating traffic crashes involving fatalities —from the basic preamble, to where every piece of shattered plastic blinker lens came to rest— police in this Miami case have obtained video footage, gathered on-scene indicators, and collected bio evidence factoring into charging the driver, Maiky Simeon, with five counts of vehicular homicide.

“The video clips — two of which were taken from a McDonald’s at the shopping center at the corner of Northwest 67th Avenue, the third from a car dealership — will now be key evidence against Simeon in any future trial. Other key evidence: his toxicology test, which showed a blood-alcohol content level of .152, nearly double the legal limit in Florida,” the Miami Herald reported.

“A Miami-Dade prosecutor, at Tuesday’s detention hearing, said he will charge Simeon with DUI manslaughter after blood tests revealed that the driver was drunk. Prosecutors, seeking to keep Simeon behind bars before trial, also told the judge about his car reaching 80 mph as [he] drove into on-coming traffic,” wrote South Florida-based reporter David Ovalle.

With all that said, we now proceed from head-on to headscratcher…

Mr. Simeon “is expected to plead not guilty at his arraignment on Monday [September 12, 2022] in Miami-Dade circuit court,” per the Miami Herald.

Indeed, Mr. Simeon has the right to a fair trial and a plea toward allegations and legal defense thereof. I remain curiously intrigued.

These are just a few topic examples. I didn’t even need to key in words for the algorithm to feed me similar stories. Many popped up organically. The NPA covered a recent one in Florida, in which FHP Trooper Toni Schuck drove her cruiser in the pathway of a drunk driver, stopping the inebriant before she plowed into thousands at an annual marathon.

In each of these and many just like them, a cop was likely internally talking to his/her Maker.

This gives rise to these words, especially echoing valorous acts of fallen police officers who unhesitatingly self-sacrifice on behalf of others.

Just think: Many of these wrong-way disasters may be preventable if it were not for pandering politicians trafficking in antithetical policies prohibiting cops from stopping motorists for violations of laws clearly contained in statute books for valid reasons, namely public safety…