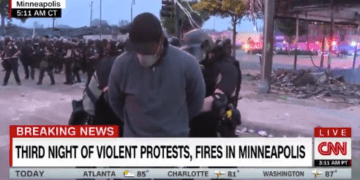 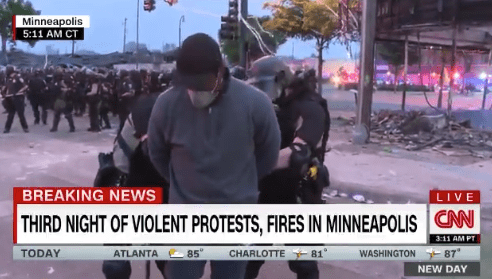 MINNEAPOLIS – CNN journalist Omar Jimenez was arrested on live TV Friday morning at a site where rioting had taken place in Minneapolis. He was taken into custody by state police as he asked officers where he and his crew should move.

Jimenez’s crew, including producer Bill Kirkos and photojournalist Leonel Mendez, were also placed in handcuffs and arrested shortly after 5 a.m.

Police told the crew they were being detained because they were told to move, and didn’t, one member of the CNN crew relayed to the network.

CNN released a statement, saying, “A CNN reporter & his production team were arrested this morning in Minneapolis for doing their jobs, despite identifying themselves – a clear violation of their First Amendment rights. The authorities in Minnesota, incl. the Governor, must release the 3 CNN employees immediately.”

You can watch the clip from CNN’s New Day in the tweet below. (Note: It is unknown what immediately preceded this video.)

Minnesota Gov. Tim Walz told CNN Worldwide President Jeff Zucker that he deeply apologizes for what happened and would work to have the crew released.

Jimenez, Kirkos, and Mendez were taken to the city’s downtown public safety building, but were released after 6 a.m.

Jimenez, after his release, then reported live outside from downtown, and said he’d been treated cordially after he’d been led away, CNN reported.

“We’re doing OK, now. There were a few uneasy moments there,” Jimenez said.