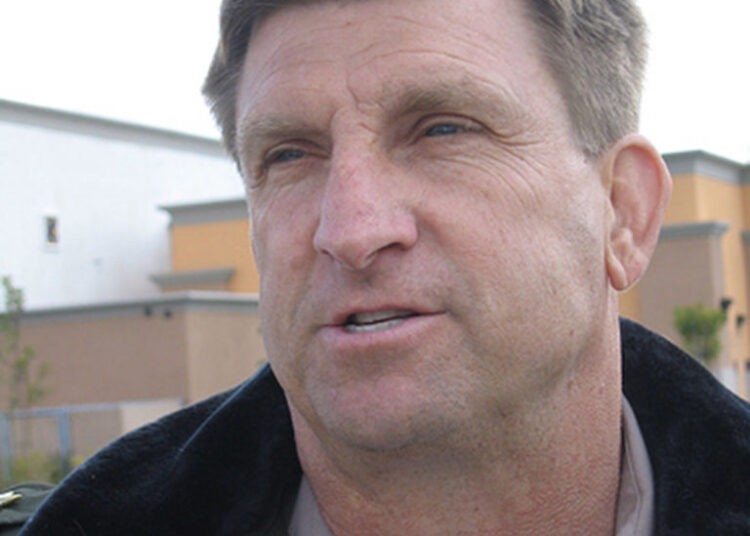 A one of kind law enforcement legend has died. Charles “Sid” Heal, Retired Los Angeles County Police Commander, renowned trainer, author and a worldwide expert in tactical operations died this week of natural causes at his home. He was 72 years old.

To say that Sid was a legend is an understatement. There isn’t another cop in the world that was as well versed in tactics, strategy and survival than Sid. His 35 year career with the United States Marines took him to more than 20 countries and four combat tours. He was the Principal Advisor to the United States Marine Corps I MEF, in less than lethal technology and alternatives during Operation United Shield, Kenya and Somalia. 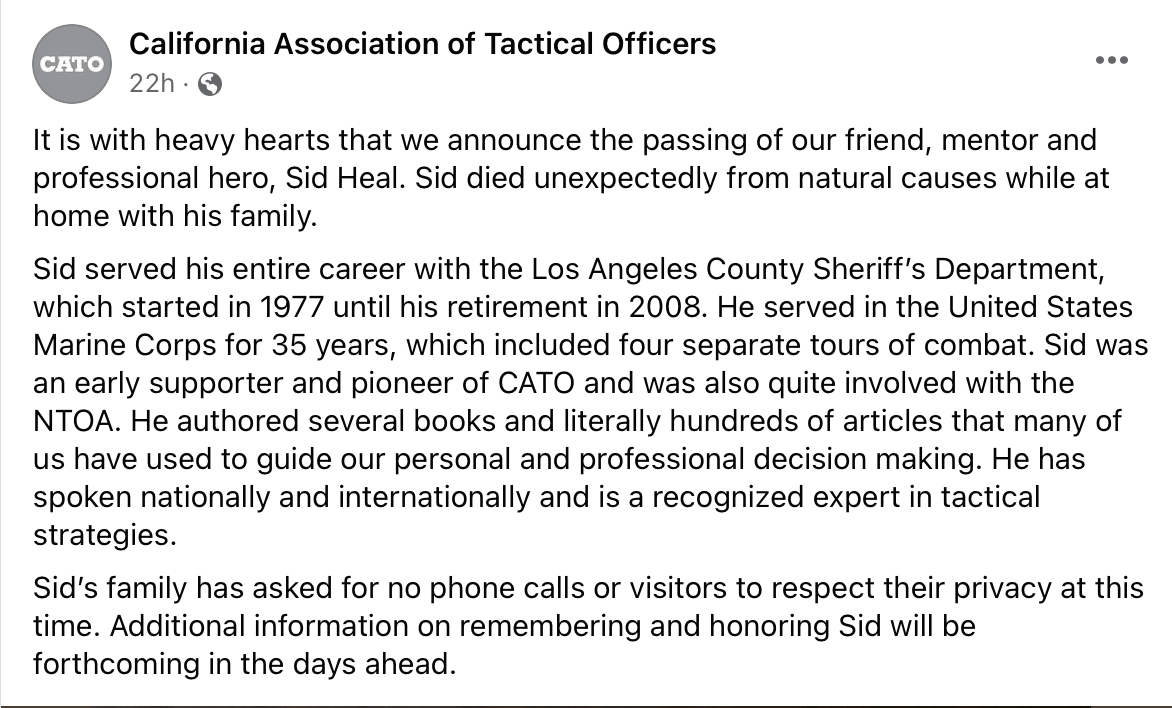 His retired in 2008 after 33 years with the Los Angeles County Sheriff’s Department as the commander in the Office of the Undersheriff. His accomplishments far surpass any words that can be said. Both his military and law enforcement careers took him to operations around the globe including the 1992 coup d’état in Thailand, the 1995 Oklahoma City bombing, as well as the attacks on the Pentagon and the World Trade Center in 2001 and a host of other disasters, natural and manmade. He Commanded and directed police and military personnel and other security forces during the 1992 Los Angeles Riots and was the Operations Officer for the County of Los Angeles Emergency Operations Center during multiple disaster relief operations such as the “L.A. Firestorms” (1993), the Northridge earthquake (1994), World Cup Soccer Finals (1994) and the annual Tournament of Roses Parade. 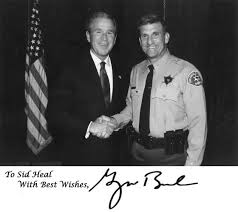 Sid is likely known to every SWAT Member in the country and was a tremendous trainer, author and mentor over the last three decades. Sid earned three college degrees including two Masters Degrees from the University of Southern California and California State Polytechnic University. He was a graduate of the California Peace Officer’s Standards and Training, Center for Leadership Development, Command College, and the FBI National Academy.  While retired since 2008, Sid continued to pour knowledge into the law enforcement profession with his training and writing. He authored more than 160 articles including several books including Sound Doctrine:  A Tactical Primer, and An Illustrated Guide to Tactical Diagramming, Field Command, and Concepts of Non-Lethal Force in 2020. 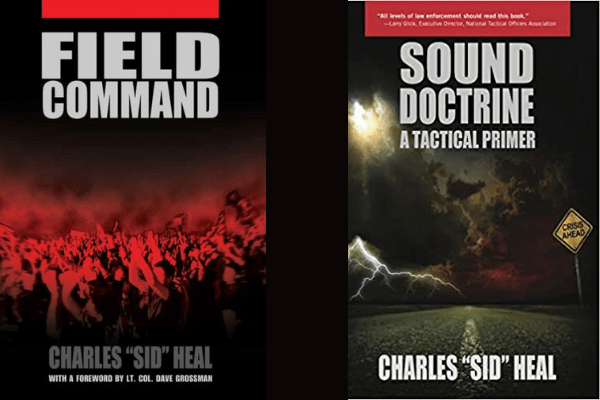 He training and speaking took him across the globe including Canada, Germany, England, Scotland, Ireland, Israel, Brazil and Argentina and his appearances on various television shows earned him a listing at IMDB.

There is no doubt that Charles “Sid” Heal contributed at the highest levels in law enforcement and the military but his true contribution to the world came in what few know. Sid poured into everyone around him and it did not matter who you were or where you were from.

I only knew Sid through e-mail conversations but he was the first person to endorse my first book on leadership. When I received his endorsement, it was one of the greatest moments in my life. Thus, this is who Sid was.

“This book is not for the squeamish or fainthearted. I would compare it with a homicide detective watching an autopsy; necessary but not pleasant. But those looking for simple solutions will be pleased because the unrealistic demands on modern law enforcement are not complex moral dilemmas – but a simple need for moral courage.” Charles “Sid” Heal

Retired Los Angeles County Deputy Rob Robinson worked for Sid as a watch commander and lieutenant. Noting the impact that Sid made, Rob calls it “a sad day for all law enforcement and military.”

Rob called Sid “a great leader and better man” and while you wouldn’t dare exchange stories with Sid Heal, the stories of his experiences were legendary, describing them as “heart wrenching, scary, hilarious and true.”

Rob recalls one tragic night, filled with dead kids and violence, when a father attacked a suspect that his squad had brought to the precinct.

“It was an incredible fight where four or five deputies were trying to subdue this grieving man” when he looked up and saw Sid right in the fight. Rob continued, “It was a commendable restraint on use of force but there were press cameras right on top of us and it certainly wouldn’t have played well on the news.”

After helping us in the fight, Sid “killed the story.” Saying that “Sid never took credit for it but to this day, I don’t know how he did it. Simply put, that was Sid Heal.”

It wasn’t just law enforcement that Sid helped. Tom Maynard is a former gang member and now forensic specialist that has turned his life around and when he met Sid, his entire view of law enforcement changed. Tom said that “Sid was straight with me. He made me realize that I didn’t have to follow the same trajectory of those around me who were headed for Prison or a violent death.”

Tom told me that Sid could have easily just enjoyed being with family, friends, and fellow officers “but he cared enough to take time out from his busy life to reach out to someone like myself, who is from a world completely opposite of his.”

Tom continued, “Sid told me that if I was ever going to break the chain of violence that I had to change the way I thought. He taught me how to think through situations and find a viable solutions that didn’t include violence. He made me take accountability for my actions, and to become a responsible person. He would not tolerate any excuses or self pity.”

Tom moved out of his violent neighborhood in New York City and came to California and said that when hard times came, it was Sid that would drop everything he was doing and come get him.

Never, Never Give Up

The week before his retirement from the Los Angeles County Sheriff’s Department, Sid was giving an academy graduation speech that is said to be the greatest ever given to an academy class. He rarely told “war” stories but he told the class about an incident he had experienced in Vietnam. His squad had been discovered on a mission behind enemy lines and started taking fire.

As Sid described it (paraphrased by witnesses), “I was a running several hundred yards across rice patties and could feel bullets striking my equipment. I had two hundred yards to go for cover and my legs and lungs were burning. I couldn’t hardly breathe and everything in me was saying to just stop and fight. If I did that, I knew I would be killed. While I wanted to stop, my head and my heart said to keep going and keep fighting. I knew I had to run to fight. You should never, never give up. If I had that day, I wouldn’t be here and no matter what you encounter, never give up.”

Los Angeles County Deputy (ret.) Rob Robinson describes Sid as a “True Warrior” and Tom Maynard called him one of the most “kind and compassionate” individuals he had ever met.Tom speaks for so many after hearing about the tragic passing of Charles “Sid” Heal.

“I am still trying to process the loss of someone I loved so dearly. but I am also so grateful for the time we had together and the impact he left on my life.”

Indeed, Charles “Sid” Heal will forever be known as one of the most influential law enforcement leaders the world has ever known. You may have never heard his name until today but I guarantee that your agency, your training and every officer is safer today because of Sid Heal.

As I look at three of Sid’s books on my bookshelf, I can only say thank you. Thank you Sid for all you did for the law enforcement profession. Your contributions could never be matched but your legacy will live on with each generation of crime fighters.

L.A. County Sheriff says a ‘mass exodus’ is happening due to vaccine mandates