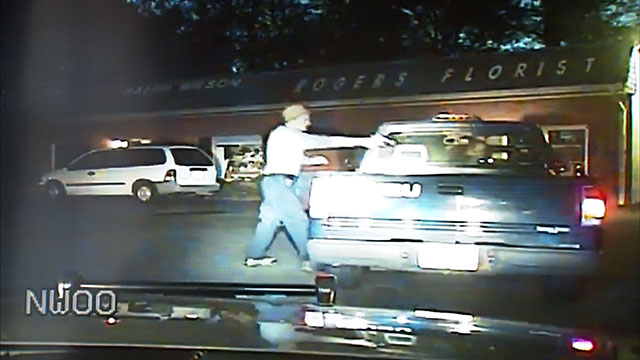 Incident Background
April 12, 2013 was another evening watch shift for Alpharetta, Georgia Police Officer David Freeman until he made a “routine” traffic stop. Freeman ran a license plate on a pickup truck and returned with a registration violation. Nothing remarkable about “another” traffic stop for David as he activated his blue lights. Freeman exited his patrol car and closed the distance to the vehicle using a passenger side approach.

Suddenly, the driver, Curtis Hicks, exited his truck and was startled to locate Freeman on the passenger side of his vehicle as Freeman issued a command to “stay in your car.” However, Hicks quickly turns to raise a pistol and shoot Officer Freeman seven times before fleeing. Despite his gunshot wounds, Freeman was able to return fire while withdrawing to a cover position and radioing for help. Freeman was able to broadcast the suspect’s vehicle description and that it was headed south towards the Roswell city limits.

While assessing his wounds, David Freeman can hear sirens converging on his position. He takes comfort that his EMS, fire service, and law enforcement Brothers and Sisters are coming to his “Officer Down! Officer Needs Help!” radio broadcast. As David bleed internally and externally from his many entrance and exit wounds, his fellow law enforcement officers were driven to locate, close with, and apprehend his attacker. David’s attacker had less than three miles of freedom driving south into the city limits of Roswell, Georgia.

Sergeant Wescott Engages in Motor Vehicle Pursuit
Roswell Police Sergeant Jason Wescott, Uniform Patrol Supervisor, was having another busy night supervising and assisting officers, resolving issues, and approving reports. As Jason monitored the radio traffic broadcasting Alpharetta’s suspect’s vehicle description, he knew that the suspect was headed straight towards him. Alpharetta and Roswell are home to more than 160,000 people and is just ten miles north of Atlanta.

From the glow of streetlights, Sergeant Wescott spotted a truck traveling south and executed a 180 degree turn to catch up to it to confirm its identity. The driver saw the police car turn around and makes a hard right into a busy shopping center almost striking several pedestrians. Sgt. Wescott confirms this is “the” truck and activates his lights and sirens and broadcasts he is in pursuit. A few quick turns and the Hicks exited the shopping center and speeds up in an attempt to escape.

As the pursuit continues, additional police vehicles from both Alpharetta and Roswell join the pursuit or respond to locations to get ahead of the pursuit. Sergeant Wescott, who was the primary pursuit officer, witnessed the suspect shooting from his moving truck at numerous police and civilian cars. Radio traffic was filled with officers reporting that they had taken gunfire through their windshield or door panels. Furthermore, a female motorist was shot by the suspect who was attempting to delay police officers by injuring citizens.

While Sergeant Wescott was forced to weave and maneuver in an attempt to avoid being shot, he did not retreat. He continued to evaluate the heavy vehicle and pedestrian traffic looking for more opportunities to ram the suspect. During these attempts, Sergeant Wescott’s vehicle was struck by numerous bullets. Wescott’s dash cam video documents the incredible danger Sgt. Wescott faced, with every attempt he made, to stop the suspect’s continuing public threat. Throughout the entire incident, Sergeant Wescott communicated calmly and clearly to dispatchers and officers including asking a subordinate to take control of the shift as the pursuit left Roswell.

The suspect then enters an interstate highway, collides with an innocent motorist who crashed into a police car. Eventually, Hicks loses control of his vehicle and crashes against the median wall. As soon as the suspect’s vehicle came to a stop, the suspect exited his vehicle and began shooting at officers. Sgt. Wescott and ten other Alpharetta and Roswell police officers return fire killing the suspect and stopping the violence. The Fulton County District’s Attorney’s Officer-Involved Shooting Review Report says that Sergeant Wescott pursuit was 18 minutes long. It was very fortunate the concrete median wall provided protection for the vehicles traveling on the opposite side of the interstate.

Incident Aftermath
Officer David Freeman made a full recovery and returned to duty. Fulton County District Attorney Paul Howard found that officers’ use of force was objectively reasonable. Sergeant Jason Wescott was awarded a Medal of Valor for his heroism. He accepted a lateral transfer supervising the Crime Suppression Unit (CSU).

The suspect had two misdemeanor convictions: 1990 for criminal trespass and 1998 for simple battery. He had a general hatred of people in authority and possessed an arsenal of weapons what were recovered when inventorying his vehicle.

Bill Lowe is a Roswell, Georgia, police officer assigned to the Uniform Patrol Division. Bill is a Georgia P.O.S.T. Master Instructor and TASER Master Instructor. Bill has a doctorate in human resource management.