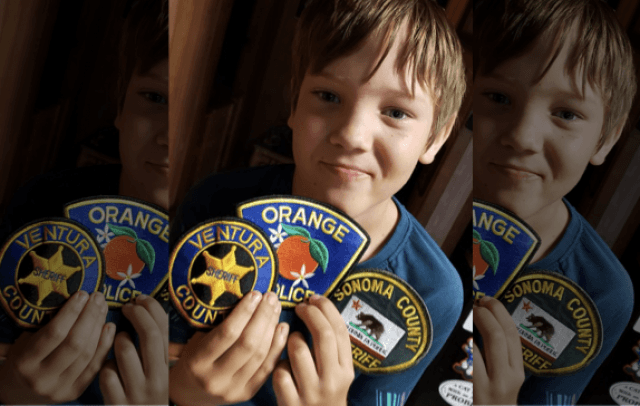 Can you donate a patch for LEO children suffering enormous loss?

Can you donate a patch for LEO children suffering enormous loss?

I am the wife of a police captain of a small agency in Southern California. I was always led to believe that if anything were to happen to my husband, his agency would take care of me. In March of 2017, his department lost an Officer off-duty to a cardiac-related death that was later deemed duty-related. The police department members initially stepped up with support. However, after the service and burial, natural progression seemed to be that members of the department and the widow began to pull apart.

I started finding widows on social media who experienced the same progressive disconnect with their departments. In many cases there was complete abandonment by the agency, especially in cases of police suicide. Many of these widows were left behind with children who also needed support and encouragement. As a result, Blue_Wives_Matter was started to offer support to fallen officer’s families regardless of cause of death. There was help for LODD and officer’s lost to suicide but not a catch-all that included anyone – on-duty, off-duty, duty-related, LODD, illness, accidents, suicide, retired, anyone.

One follower stuck out to me. I clicked on her profile on Instagram and sure enough, she had recently lost her husband of almost 20 years. I sent her a message introducing myself and offered any assistance. We chatted a bit and I sent her a care package that I had come up with to send to families as just a gesture of kindness and support. She was so overwhelmed by this simple gesture. I then mentioned to her that perhaps her kids would enjoy collecting law enforcement patches as a hobby, something to look forward to getting in the mail and a way to stay close to Dad with something that was very important to him.

Sylvia Solis had lost her husband, Los Angeles School Police Officer Art Solis, to cancer on Dec 30, 2017. It had been barely 6 months when I offered this idea to her and she jumped at it. I sent her a patch from my husband’s department and a few others I had on hand. I also asked my dear friend, Homicide Lieutenant Dave Betz of Chelsea Police Department, Massachusetts, to mail her a patch too. Moreover, I asked my friends at Beverly Hills Police Department, California, to send her a patch, which they did.

As Blue_Wives_Matter picked up a bigger following, I started a support group on Facebook for the spouses and significant others of fallen officer’s called Widows Enforcement. After I started Sophie Solis collecting patches, I did the same for Sammy Fodge who lives in New Mexico with his mom Sally. Sally had told me that Sammy, age 10, was really struggling without a male mentor in his life since losing his dad, Deputy Samuel “Paul” Fodge, in June 2018 to suicide. This was the start of the patch program where children of fallen officers receive small packages in the mail with stickers, as well as police and fire patches.

Then I enrolled Little “O” as we affectionately call Omarrion Calderon, age 12. You may remember the story of his dad’s passing and the uproar it caused with Interim Dallas County Sheriff Marian Brown ordering for there to be no honors given at Deputy Omar Calderon’s funeral despite his 18 years of service. Brown stated, “Due to the nature of Deputy Calderon’s death, the sheriff’s department does not want to condone nor appear to glamorize suicide,” to justify her decision. Omar’s widow, ShaRonda Calderon, told me that Omar’s agency has also completely abandoned her family as well.

More and more of the widows in my support group (and a widower) also wanted to be included in the Patch Program as well. Only problem was, I was running out of patches. I met an officer from Freehold TWP Police Department, New Jersey, by the name of Andrew “Drew” Galaydick on the Police Week Tent City board on Facebook, where I had posted in desperation asking for donations of patches. Drew responded and sent me a continuous supply of a variety of different patches from his department. Drew stated that if I made a flyer describing the program and the need for patches, he would post it in his LEO groups on Facebook. Unfortunately, this only resulted in one response willing to donate patches. But I didn’t give up and decided to use Drew’s idea and create a flyer that could be used among law enforcement agencies to solicit donations..

I created a post on my public site on Facebook Blue_Wives_Matter and have had an overwhelming response from followers who wanted to help and send patches. One such person was a retired sergeant that had been one of my husband’s advisors when he was an explorer many years ago. He had been collecting patches since the late 1970’s and just had them boxed up in his garage. And more and more volunteers sent patches, so this enabled me to enroll upwards of 30 children of our fallen officers into our Law Enforcement Patch Program.

Every month, my volunteer, retired Costa Mesa, California, Police Officer Tom Coute and I, pick through our collection of patches to match up which patch would be enjoyed best by which child. For example, little Zach Adams lives in Florida and his dad was a deputy. So we look for patches from Florida or sheriff’s deputy patches to send to him. There are three siblings who live in Northern California whose dad was a CHP officer, so we look for Highway Patrol patches to send to them from other states. Officer Galaydick has sent some nice Unity Tour patches and I made sure Sammy Fodge got one of those because he attended Police Week with us this past May.

Please help Blue_Wives_Matter keep our patch program going by sending in donations of new or used patches. You can contact me via email [email protected] if you are interested in a flyer to hang or pass out. Please mail patches to the address below:

Kristen Sweaza is the spouse of a 29-year law enforcement veteran. She has started an organization called Blue_Wives_Matter. The purpose is to provide immediate and long-term support for spouses and families of officers who have passed away regardless of cause of death. She can be followed on her Instagram or Facebook at Blue_Wives_Matter or email her at [email protected].

Latest posts by Guest (see all)