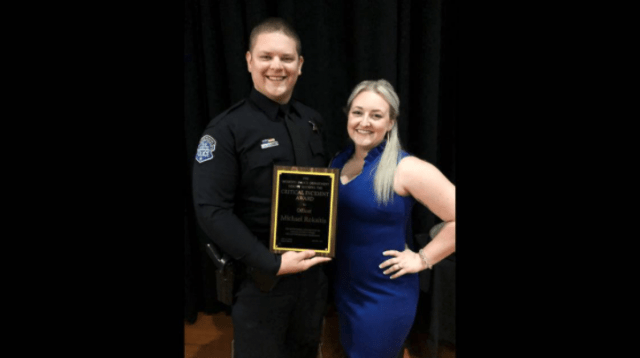 MODESTO, Calif. — Officer Michael “Mikey” Rokaitis of the Modesto Police Department is required to have at least part of his right leg amputated as a result of a gunshot wound he suffered earlier this month while serving a search warrant, according to a report.

In a Facebook post Monday, the police agency said Michael Rokaitis already had undergone six surgeries since being shot Aug. 14 and has more ahead of him.

His wife Megan Rokaitis shared the distress being experienced by the family, Modesto Bee reported.

“(Doctors) did everything they could to save it and waited as long as they could, but it’s time,” she wrote on social media. “We just want him awake and home at this point.”

Megan Rokaitis further provided medical details as they hope for the best.

“We are hoping that they will be able to amputate below the knee, as that will be the easier route to recovery and mobility in the future, but they won’t know until they get in there whether it will happen below or above the knee,” she wrote.

Michael Rokaitis was shot in his ballistic vest and a second time below the body armor, which proved most traumatic. The gunshot wound in his lower abdomen injured an artery to his right leg, according to the Bee.

He was shot while serving a search warrant at home on East Orangeburg Avenue following a pursuit, Law Officer reported. He was said to be in critical condition following the shooting. According to a department Facebook post, he remains in critical but stable condition.

Officers returned fire, striking the suspect who was subsequently taken into custody, according to CBS13. Moreover, a total of four people have been arrested and charged in connection with the shooting and a fifth is wanted.

A Facebook post by the Modesto Police Department said the officer “has a heart of gold and is kind to all he meets. He is always laughing and to say it’s contagious would be a severe understatement.”

Michael and Megan Rokaitis have an 18-month-old daughter who he loves to watch, learn, grow and play, according to the post.

The officer is described as a “hardcore Oakland A’s fan”who loves music and the outdoors. His favorite excursions include hiking in Yosemite with his wife and an annual trip to Wisconsin to fish with family.

The most valued assignment for the 7-year police veteran is working as the explorer adviser, where “he gets the opportunity to teach young, aspiring police officers how to prepare for their career goals.”

“The impact Mikey has had on his family, friends, coworkers and community is massive,” the post reads. “It is a true testament to his larger than life personality and his big heart for those around him.”