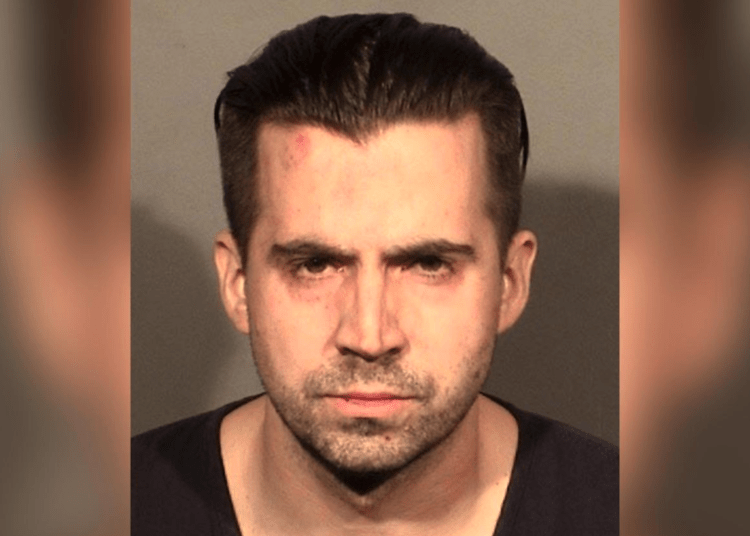 Rogers is accused of ripping off at least $90,000 in three different robberies dating back to November, during which he allegedly used his police-issued firearm.

Rogers was arrested Feb. 27 after holding up the Rio Hotel and Casino. A security officer chased Rogers out of the casino and held him until police arrived.

Detectives then connected him to two other heists based on his “unique gait,” which was also captured on security footage at two other casinos, aol.com reported.

Rogers is accused of committing an armed robbery on Nov. 12 at the Red Rock Resort and Casino, making off with more than $73,000.

Less than two months later, on Jan. 6, Rogers reportedly committed a robbery at the Aliante Casino Hotel Spa, netting about $11,500.

Investigators conducted a search at Rogers’ apartment following his arrest in February. They discovered black latex gloves, paperwork tying him to a car used in one of the robberies and and injury forms about a 2019 knee injury that seemingly explains his walk.

Hence, Rogers is due in federal court Thursday. Furthermore, he has been suspended without pay.

LAS VEGAS — An officer of the Las Vegas Metropolitan Police Department is in custody. He is charged in at least one armed robbery, with investigators eyeing him for two more, according to reports.

Officer Caleb Rogers was arrested Sunday morning. Prior to his arrest, he was assigned to the Community Policing Division, Bolden Area Command, 8 News Now reported.

Rogers, 33, is charged with a Sunday morning robbery at the Rio Hotel and Casino near the Las Vegas Strip.

Police responded to the off-strip casino and sportsbook around 7 a.m. and discovered Rogers in the custody of security personnel, according to the LVMPD.

Rogers is booked at the Clark County Detention Center on several charges, which include two counts of armed robbery, burglary with a firearm, and assault with a deadly weapon, aol.com reported.

Detectives believe Rogers could be linked to an armed robbery at Red Rock Casino Resort on Nov. 12 and an armed robbery near Aliante and I-215 Jan. 6 in North Las Vegas, according to 8 News Now.

Steve Grammas, President of Las Vegas Police Protective Association (LVPPA), said he is aware of the accusations against Rogers. Since the crimes occurred while the officer was off-duty, Grammas said Rogers will not be represented by the police union during his criminal case.

The LVPPA is aware of the arrest of officer Rogers. While everyone has a presumption of innocence until proven guilty, if these allegations are true, the LVPPA could not be more disappointed and disgusted by the actions of one rogue officer. This is not indicative of the excellent work and character that the men and women at LVMPD exemplify on a daily basis. To be clear, no police officer that is a member of the LVPPA is entitled to criminal representation when committing acts not in accordance with the course and scope of their duties. If these charges are proven to be true, we hope the criminal justice system accurately holds this person accountable.

Rogers has been a police officer since 2015. LVMPD said he willl be suspended without pay pending the outcome of the investigation. He was due to make his first court appearance Monday morning.

LVMPD did not immediately return media requests for additional details on Monday.