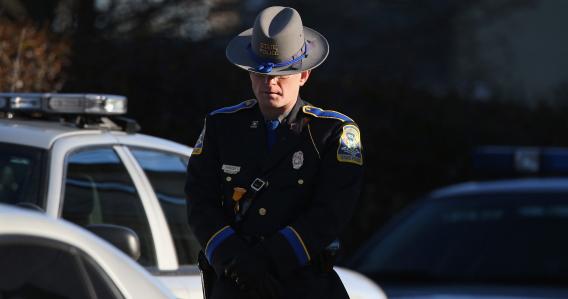 I have been nursing a sore back the last week, a recurring reward from an auto thief I received in 1986 as he rammed me and another officer, in our cruisers, in his unsuccessful attempt to escape. I began taking stock of other lifelong injuries, the cost so many on the thin blue line receive as we travel the warrior’s road.  Two bad shoulders make it difficult to sleep on either side, hands that go numb and knees that hurt continually.

The type of people we choose and the culture we create in law enforcement leads us to take bumps and bruises in stride as we protect and serve.  It is made even more difficult by the continual lies told and repeated by politicians, main stream media and terrorist groups like Black Lives Matter and Antifa about who they say we are – bullies, thugs and criminals. Self-serving as they are, these groups may dissuade some new recruits from joining the line but those brave enough to step up will be willing to pay the price that many in society never realize is paid by those courageous public servants who will answer the call and run into trouble when everyone else is running away.

As I pondered these injuries and the thoughts of so many officers I know who have the bumps and bruises from standing in the gap between chaos and peace, I began to reflect on a conversation I had with my children this past summer.  I am fortunate to have been blessed with the greatest wife and kids a cop could have.  They have always been willing to put up with the long hours, shift work and the baggage that comes with the job.  But there are some things our law enforcement culture teaches us about the things we see.  My family knows about some of the PTSD that has accompanied my journey.  This is the PTSD that I thought was BS for most of my career because it showed weakness and we were taught to suck it up.  My family knows about why I have a difficult time grilling burgers or why I can’t eat fish sticks.  I never realized until I met Dr. Alexis Artwohl, listened to her lectures and read her book Deadly Force Encounters, that there was a real explanation to my quirks.

On a beautiful summer Sunday during lunch on our back porch with my family, a question came up that brought me to a difficult point.  My oldest had joined me in this profession and while explaining a point we moved past the bumps and bruises and got to those old scars.  As I explained the pain in my soul over the things my eyes have seen, and my mind can never forget, I felt tears building up in my eyes (even now as I write this article they return) as I explained the effects of those memories.  The memories of dead babies, suicides, crashes and homicides that I can never shake.  I was embarrassed at first but then realized they just needed to see what I had never before exposed in such a personal way.

Dr. Artwohl had taught me and set me on a new mission. The more I learned the more I incorporated in my discussions with officers.  I see safety services’ mental health resources exploding and reaching out in this profession.  From books like Kevin Gilmartin’s Emotional Survival for Law Enforcement or The Price They Pay by Karen Solomon and Jeffrey M McGill, the story is being told about the scars we carry long after our service is done.  We see the emotional toll in the amount of law enforcement suicide which claims more lives each year than line of duty deaths.  Resources like Cops Alive and Blue Help who are reaching out to help us combat the cultural roadblocks we have created to our emotional well-being.

I am no longer ashamed of the tears.

I refuse to be quiet.  We owe it to the courageous men and women who go into harms way to give them all the tools and resources they need to make them whole again or prepare them for the damage that is done and begin to help them heal.  We are a tough group and that is how it should be, but we should know that pretending these things don’t take a toll is a lie.

If you are in leadership, a leader or just have influence, reach out to these organizations, set up some training or gain the knowledge you need to help our people get the healing they need for the bumps, bruises and scars they receive in what is truly a noble and honorable profession.