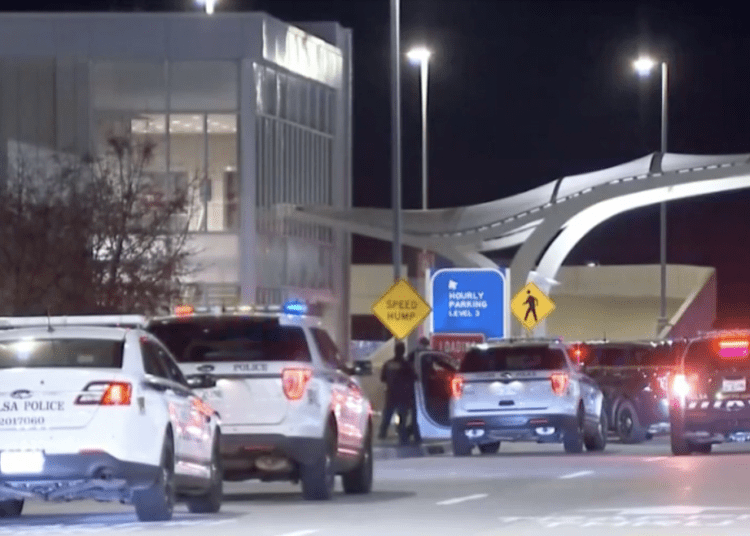 Rounds were flying during a shootout at the Tulsa International Airport. (Screenshot News 9)

TULSA, Okla. — Bullets were flying at the Tulsa International Airport about midnight Tuesday after a man tried to kill his wife upon returning to the area. The suspect was wounded and an officer sustained a hit to his body armor during the gun battle, according to a report.

The Tulsa Police Department identified the suspect as Joseph Watson Jr, 49. He was taken to hospital following the shooting.

Tulsa police said the confrontation began after a woman and her brother were about to exit the airport after returning to the area on their flight from Houston, News 9 reported.

The woman and her husband had engaged in an argument and he threatened to kill her when she arrived back in Tulsa, according to police.

As a result, the woman feared for her safety and notified airport police of her circumstances. Hence, they thought it was prudent to escort the woman and her brother to their car.

As the group was walking toward the parking garage, Watson arrived and opened fire. Airport police chased the man to the garage and a gun fight ensued.

According to law enforcement authorities, the suspect was shot in the foot and eventually taken into custody. One of the officers took a round to the vest, but is expected to recover from his injuries.

Watson was transported to the hospital for his injury. Tulsa police said he will be booked on the appropriate charges once he is medically cleared from the hospital.

Watson was in possession of three weapons as he opened fire on his wife, her brother, and law enforcement personnel. Several vehicles were damaged by gunfire during the incident, News 9 reported.

“For me when it goes out as an active shooter it’s probably one of our higher priority calls,” said Tulsa Police Capt. Jarrod Hart. “Actually being at the airport with as many innocent civilians walking around bodies that are moving around any time there is gunfire it’s obviously going to be a major incident because of the potential of lives out here.”