The mural is littered with anti-law enforcement phrases such as “F12," “F*#! the police," and "Blue Lives Don't Exist." 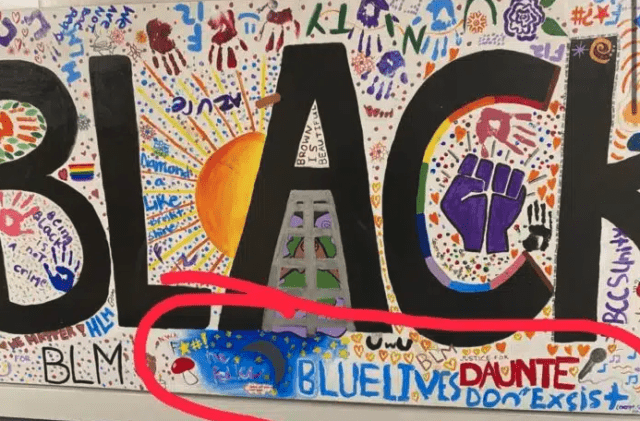 A photo of the mural that was posted on Facebook and provided to Alpha News.

The mural, displayed in a main hallway in Brooklyn Center High School, is littered with anti-law enforcement phrases such as “F12,” “F*#! the police,” and “Blue Lives Don’t Exist.” It was created after the death of Daunte Wright, who was fatally shot by Kim Potter while resisting arrest during a traffic stop.

“It’s appalling they’re allowing this kind of thing up in their school,” according to Tracy Kracht, a local parent.

Students are not being taught to respect authority, she added.

“They are saying the police don’t matter, and that’s what’s so offensive about it,” said Kracht, who was at the school recently for a wrestling match.

Kracht said school officials are doing a disservice to students by teaching them to disrespect police.

A photo of students painting the mural that the district posted on Facebook.

“[Gov. Walz] allows these kinds of things to go on in our schools. It really is disheartening that our tax dollars are paying for this. The education the kids are receiving is certainly not helpful for them to be able to think it’s OK to feel that way and think that way about another human being,” she said.

Kracht said her “emotions started bubbling” when she saw the artwork because she comes from a long line of law enforcement officials.

District officials said the piece is an example of one of the many tools students used to process Wright’s death.

“Following the police killing of Daunte Wright and the subsequent unrest around the Brooklyn Center community and throughout the metro area, Brooklyn Center students developed this piece of artwork and used it as a way to process their response to what they saw happening in their community,” according to a statement from the district.

“Our district’s mission is to become a justice-centered school community who fuels the unique genius of each student. It was, and continues to be, important for the district to provide young people a space to authentically process their experiences,” the statement added.

Potter, who mistook her gun for a Taser,  is currently serving a 16-month sentence. She was recently denied a hearing in front of the Minnesota Board of Pardons.

About the author: Sheila Qualls is an award-winning journalist and former civilian editor of an Army newspaper. Prior to joining Alpha News, she was a Christian Marriage and Family columnist at Patheos.com and a personal coach. Her work has been published in The Upper Room, the MOPS blog, Grown and Flown, and The Christian Post. She speaks nationally on issues involving faith and family.