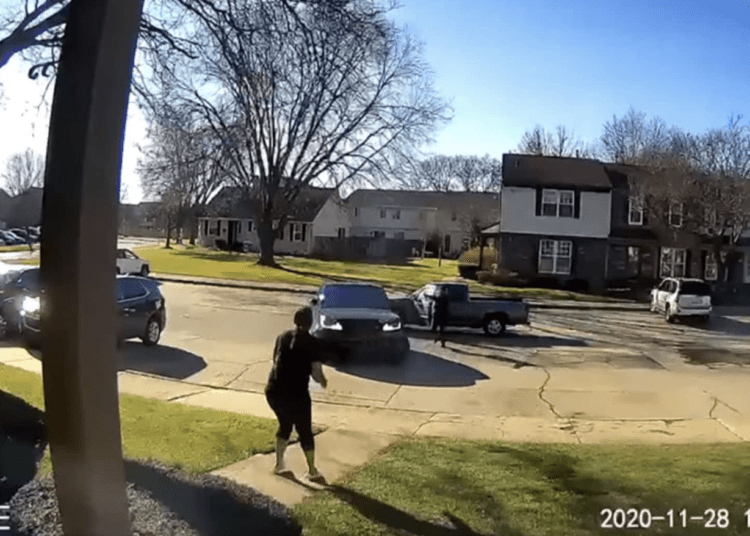 This still image from surveillance footage shows a gunman in a pickup truck drive behind and block the victim from pulling out of a parking spot at a condominium before opening fire in Sterling Heights, Mich., on Saturday. (Sterling Heights Police Department)

STERLING HEIGHTS, Mich. — A shooting suspect in Michigan was “sitting, waiting and watching” before opening fire on a woman he intended to murder as she left her condo Saturday, investigators said.

The shooting, which occurred at point-blank range, took place outside the Park Place condominiums in Sterling Heights, a suburb of Detroit. The victim is expected to recover, while the gunman remains at large, WDIV-TV reported.

“This guy had every intent of trying to murder her that day,” Sterling Heights police Lt. Mario Bastianelli told FOX2 Detroit. “He’s sitting, waiting and watching.”

Police released surveillance footage of the incident on Monday and asked the public to help identify the suspect.

This still image from surveillance footage shows a gunman in a pickup truck drive behind and block the victim from pulling out of a parking spot at a condominium before opening fire in Sterling Heights, Mich., on Saturday. (Sterling Heights Police Department)

The video (included below) shows the woman leave her condo and get in her SUV. As she backed out of her parking spot, a man who had been sitting in a pickup truck across the street drives up and blocks her vehicle. The suspect gets out of the truck and begins firing at the driver-side window from just a few feet away.

The woman is seen speeding away as another woman in her condo screams from the porch. The gunman continues to fire at the moving vehicle before getting in the truck and giving chase.

The suspect is seen opening fire on the woman from close range before she drives off. (Sterling Heights Police Department)

Moments later, the woman returns and parks her SUV on the front lawn before running back into the condo to call for help, police said. The suspect pulls up in the pickup truck and partially exits the vehicle before speeding away.

“That’s just the grace of God that she wasn’t killed,” Bastianelli said. “That’s just very close range and the fact that he missed, it’s a miracle.”

Detectives are working to determine a motive. Moreover, law enforcement authorities said the suspect and victim knew each other, Fox reported. However, identifying information was not revealed.

Investigators have asked anyone with information on the vehicle or suspect to call the police department at 586-446-2866.