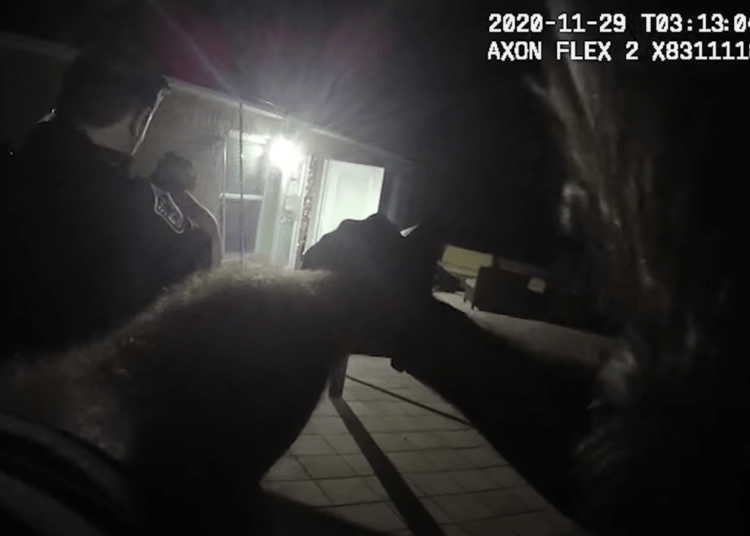 A 19-year-old woman dialed 911 Saturday night and told dispatchers that men with guns had broken into her family’s home before 10 p.m. in the 1400 block of Eden Drive in the city of Deltona. The woman is heard softly asking the dispatcher for help and saying that her mom is crying, the Orlando Sentinel reported.

According to the Volusia County Sheriff’s Office, three armed suspects approached two people who were in the opened garage of the home and demanded they empty their pockets. Next, the armed robbers entered the home and found three other adults.

All five victims were found tied up in the garage when deputies arrived.

Nearly nine minutes of body camera footage released Monday showed deputies established a perimeter around the home as a possible robbery was taking place, describing how suspects with backpacks appeared to be rummaging around inside, Fox reported. People can be heard screaming for help from the garage.

As the suspects tried to escape from the home, deputies can be heard yelling for them to get on the ground and drop their weapons. One suspect was arrested in the driveway, while another two were apprehended in the backyard.

Deputies then entered the house to sweep every room and found a 7-year-old girl unharmed and hiding in a bedroom. Footage captured a deputy speaking with the girl once she was reunited with her family.

The suspects were identified as Jermaine Oliver, 30, John Anderson, 39, and Derrick Mathis, 32, the Orlando Sentinel reported. Each was charged with home invasion robbery with a firearm, five counts of kidnapping and one count of kidnapping a child. The men were booked at Volusia County Jail and are held without bond.

According to the sheriff’s office, the incident was not random and remains under investigation.

Sheriff Mike Chitwood retweeted the footage of the incident and wrote: “Watch these moments of absolute chaos & notice how these deputies take control. OUTSTANDING JOB by everyone who rushed to this home invasion, put handcuffs on 3 of the scumbags responsible, and carried a scared little girl to safety. GREAT WORK ALL @VolusiaSheriff DEPUTIES!”

Watch these moments of absolute chaos & notice how these deputies take control. OUTSTANDING JOB by everyone who rushed to this home invasion, put handcuffs on 3 of the scumbags responsible, and carried a scared little girl to safety. GREAT WORK ALL @VolusiaSheriff DEPUTIES! https://t.co/ev35uvcfBB