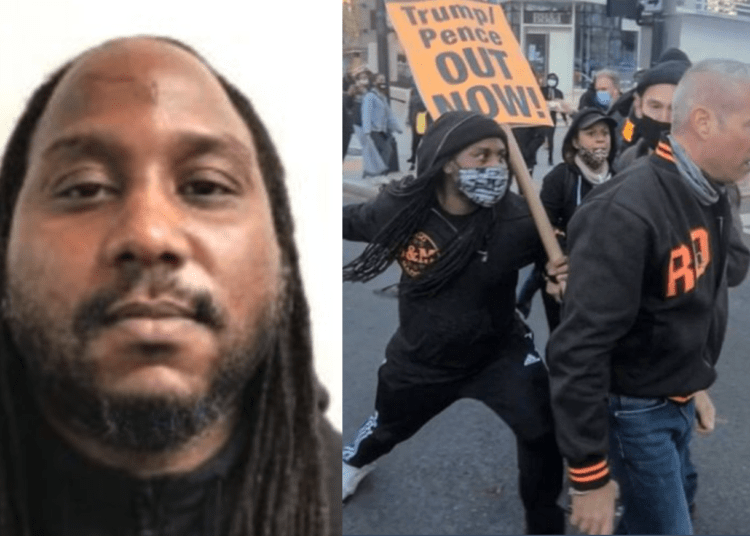 Kenneth Deberry was sentenced to 39 months in prison. (Twitter)

WASHINGTON – A Black Lives Matter activist who is also a convicted pedophile was sentenced Wednesday to prison for more than three years following a viscous attack of a man during a November 2020 Trump rally in Washington, DC.

Kenneth Deberry, 40, pleaded guilty to unlawful possession of a firearm by a felon and simple assault in US District Court for the District of Columbia last October.

As a result, Deberry was sentenced by Judge Tanya S. Chutkan to 39 months in prison—33 months for the firearm violation, 180 days for assault—on Wednesday, according to the US Department of Justice.

Federal authorities said once Deberry completes his term in prison, he will be placed on three years of supervised release, according to the Post Millennial.

The Metropolitan Police Department arrested Deberry on Nov. 14, 2020, for disorderly conduct, including inciting violence, aggravated assault, and felon in possession of a firearm after police found he was carrying a handgun, Law Officer reported at the time.

Deberry was barred from possessing a firearm because of previous convictions in the District of Columbia for robbery, sexual abuse of a child, and other felony offenses. As part of the plea, the government reduced the aggravated assault to simple assault and dismissed the disorderly conduct charges.

Kenneth Wayne DeBerry, 39, of DC, charged w/aggravated assault, inciting violence & being a felon in possession of a gun per @MrAndyNgo https://t.co/BvAhG07umW pic.twitter.com/IqTF69tfZT

According to the MPD Sex Offender Registry, Deberry is a registered sex offender who was convicted in Washington, DC in 2008 of second degree child sexual abuse against a person under 16 years of age.

On May 14, 2021, while he was on home detention pending trial, Deberry got into an argument with a male relative at his residence. During the altercation, he strangled the relative and repeatedly punched him in the face, the Post Millennial reported.

A photo of the relative that Deberry violently assaulted. (Image via Post Millennial)

The victim was hospitalized with significant injuries, which included a collapsed lung, fractured ribs, and a broken nose, among other injuries. Deberry was arrested and has been in custody ever since, according to court documents.

The status of this case is unclear.