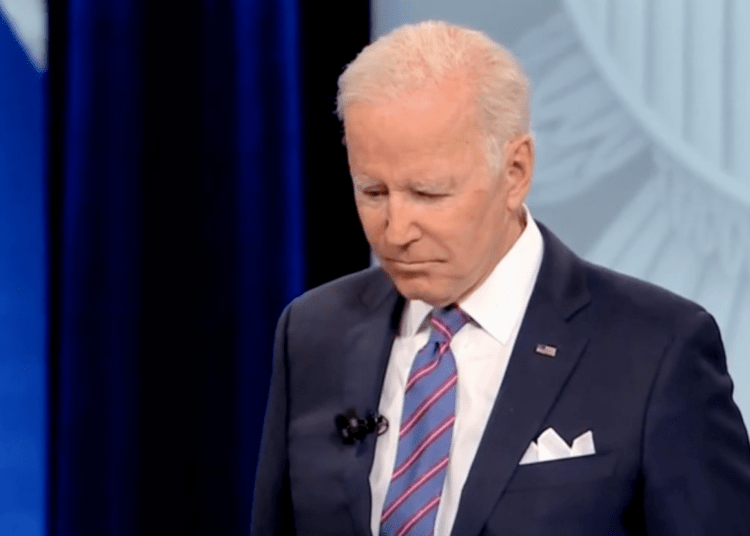 President Joe Biden said Thursday that police officers and other first responders who decline mandatory COVID shots should be forced to remain at home or be terminated.

Furthermore, the president also announced a stricter vaccine requirement for federal workers and contractors in September that limited the loophole for unvaccinated individuals.

Emboldened by the president’s move, many Democrat controlled jurisdictions have required some form of vaccination mandates.

Police officers and first responders across the country – including in places like Chicago and Seattle – have voiced opposition to the mandates, with some leaving the employment over it and others placed on “no pay” status or fired.

A trooper of the Washington State Patrol saw his impending doom and signed off the air during his final shift by saying, “(Governor) Jay Inslee can kiss my ass,” Law Officer reported.

Many in the law enforcement community believe the mandates go way beyond public health and welfare, but intentionally target first responders and military members who are perceived to have traditional, conservative values.

“As many as one-in-three emergency responders in some cities like Chicago, Los Angeles, right here in Baltimore, are refusing to comply with city vaccine mandates,” CNN’s Anderson Cooper noted Thursday while interviewing Biden. “I’m wondering where you stand on that. Should police officers, emergency responders be mandated to get vaccines? And if not, should they be – stay at home or let go?”

Biden responded without hesitation by saying “yes and yes.”

“By the way … I waited until July to talk about mandating because I tried everything else possible,” the president continued. “The mandates are working.”

Biden pointed to pushback from airlines on vaccine mandates and noted that despite it, the majority “have gotten the vaccine.” Yet he seems to ignore the coercion that’s been exerted on the workforce.

He said talk of people leaving the military over mandates is “not true” and criticized those trying “to make this a political issue” when he is foremost among those doing so.

“‘Freedom,’” Biden mocked as he described his concerns around the issue of mandates, according to Daily Wire. “‘I have the freedom to kill you with my COVID.’ No, I mean come on. Freedom. Number one. Number two … the gross misinformation that’s out there.”

Biden reiterated that there’s “so much misinformation” and ended the answer by pointing out Fox News’ vaccine mandate. He said he finds it “fascinating” and joked that he’s at “3% favorability” at the network.

In a fact check, Biden appears to have missed the mark regarding Fox News.

Kevin Lord, the company’s head of human resources, announced that more than 90% of Fox’s full-time employees claim to have been vaccinated for COVID-19. For those who have chosen not to receive the shot, the company instituted daily testing, according to Media Matters.

Meanwhile, Biden and his administration (along with mainstream media) ignores or downplays the favorable impact of ivermectin as Big Pharma has buried it in an avalanche of negative coverage despite medical experts like Dr. Pierre Kory, president of the Front Line COVID-19 Critical Care Alliance, rebutting the misinformation. They’ve also downplayed the impact of natural immunities from those who’ve contracted the virus.

Kory has dedicated much of his time to spreading accurate information about COVID and ways to treat the virus. He is adamant about correcting the record on ivermectin, which the mainstream media has dubbed nothing more than “horse dewormer,” he said on a recent podcast with Allie Beth Stuckey.

“However, the situation is much more nuanced than that, and Dr. Kory explains how the drug works and how it interacts with COVID,” the show says in the introduction to the episode. “We also discuss the deep corruption in the medical industry and the coordinated effort from these major companies to spread disinformation about ivermectin and suppress its use.”