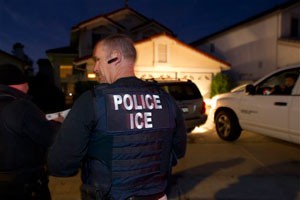 The U.S. Customs and Border Patrol have made 8,691 southern border arrests of known criminals that have entered the U.S. illegally in the last ten months.The Border Patrol relies on information reported in the National Crime Information Center database for prior arrests and do not have access to arrest data in other countries. Combined, they have committed 12,685 crimes in the United States as reported by Go To Source.

Many pf the southern border arrests made by the Border Patrol are registered sex offenders who were previously convicted and served time in U.S. prisons. They were released and deported only to reenter the U.S. again illegally this year.

A Honduran national and registered sex offender with an extensive criminal history was recently arrested in Laredo. He was convicted of lewd lascivious battery and sexual activity with a minor in 2017 in Florida and was deported in October 2020. In another apprehension, Laredo agents detained a Mexican national wanted for allegations of rape out of Bernalillo County Sheriff’s Office, in Albuquerque, New Mexico.

His arrest, the Laredo Sector said in a news release, “continues to highlight the dangers that illegal immigration poses to our country especially by those individuals who have been previously convicted for sexual misconduct. These dangerous criminals increasingly continue to endanger our communities and show a lack of regard for our country’s laws.”

Also arrested was a Mexican national who had been previously arrested for first-degree attempted sexual abuse of a child in Lexington, Kentucky. He was sentenced to one year in prison, registered as a sex offender, and then deported only to reenter the U.S. illegally this month and be caught.

The Del Rio sector reported a 1,400% surge in the number of sex offenders apprehended by its border agents this year compared to last year/

As of June 30, Border Patrol agents had made southern border arrests of illegal immigrants on charges of sex-related crimes, many with prior convictions involving minors. By comparison, during the same period in fiscal year 2020, agents had only apprehended 55 such criminals. The difference represents an increase of 542%.

“The cancellation of this program effectively broadcasts to the world that the United States is now a sanctuary jurisdiction for sexual predators. This message creates a perverse incentive for foreign sexual predators to seek to enter the United States illegally and assault more victims, both in the process of unlawful migration and after they arrive,” the attorneys general wrote.