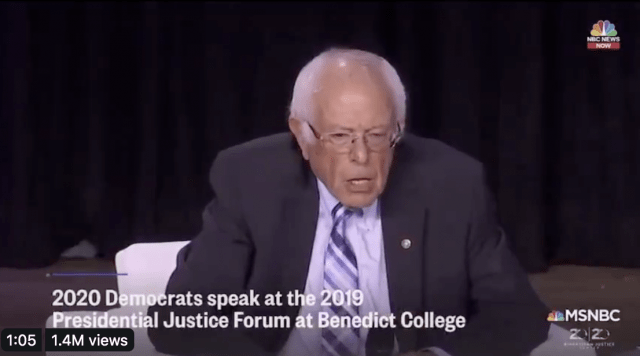 COLUMBIA, S.C. – Democratic political candidate Bernie Sanders was the source of controversy during his appearance at the Second Step Presidential Justice Forum on Saturday.

The forum was held at the historically black Benedict College in South Carolina, complex.com reported.

While fielding questions from the audience, a black student asked Sanders: “If I’m your son, what advice would you give me next time I’m pulled over by a police officer?”

Sanders responded by telling the student to try to identify the police officer “in a polite way” and comply with the officer’s request “so that you don’t get shot in the back of the head.”

Appropriately, Sanders caught heat for this response. Some replies were on target. Yet other people, who’d like to support a Democrat, assumed Sanders was claiming that all victims of police shootings are rude to officers.

Yet, most devastating for individuals on the law and order side, his reply ignores the criminal transgressions that suspects are immersed in when police engage in lethal force.

Oooohhhhh, so all those victims of police shootings were... just asking for it... Gotcha

So, Black Americans t naturally disrespectful & not polite? Got it.

Oh @BernieSanders. I want to support you, but you are too seasoned generic answers like these towards Black American issues.

Lord, @TheDemocrats are in real trouble. They NEED the Black vote in both elections.

Furthermore, others believe statements made by the Democratic candidate have merit. They believe Sanders gave the student sound advice by removing fault in case of a tragic encounter with police. However, they fail to recognize the “polite” portion of his response is appropriate, but saying they will get “shot in the back of the head” infers that law enforcement officers are out to execute them. These words are inflammatory, pandering, and not helpful.

I’m not a Bernie supporter but his response was correct. Black folks are talking to their children especially their sons about what to do during a police stop. I’m glad he didn’t sugarcoat his words.

Yeah I don't have a problem with Bernie's answer it's not a great answer but even I as a black man don't have a sufficient answer for this question because it's not really about what I should do it's more so about what cops shouldn't do ??‍♂️

Here are some facts pointed out by Heather MacDonald in her piece, “There Is No Epidemic of Racist Police Shootings.”

“A new study published in the Proceedings of the National Academy of Sciences demolishes the Democratic narrative regarding race and police shootings, which holds that white officers are engaged in an epidemic of racially biased shootings of black men. It turns out that white officers are no more likely than black or Hispanic officers to shoot black civilians. It is a racial group’s rate of violent crime that determines police shootings, not the race of the officer. The more frequently officers encounter violent suspects from any given racial group, the greater the chance that members of that racial group will be shot by a police officer. In fact, if there is a bias in police shootings after crime rates are taken into account, it is against white civilians, the study found.”

“The ‘policing is racist’ discourse is poisonous. It exacerbates anti-cop tensions in minority communities and makes cops unwilling to engage in the proactive policing that can save lives. Last month, viral videos of pedestrians in Harlem, the Bronx, and Brooklyn assaulting passive New York Police Department officers showed that hostility toward the police in inner-city neighborhoods remains at dangerous levels.

“The anti-cop narrative deflects attention away from solving the real criminal-justice problem, which is high rates of black-on-black victimization. Blacks die of homicide at eight times the rate of non-Hispanic whites, overwhelmingly killed not by cops, not by whites, but by other blacks. The Democratic candidates should get their facts straight and address that issue. Until they do, their talk of racial justice will ring hollow.”

So the smoke and mirrors-racism created by Sanders and many other Democratic presidential candidates needs to be called out for what it is. IT IS A LIE. MacDonald referred to it as “poisonous,” and I couldn’t agree more. The public threat is coming from criminals who are granted more leniency around every corner, while police officers are targeted as being the instigators of hateful, racist dissension. THIS SIMPLY IS NOT TRUE!