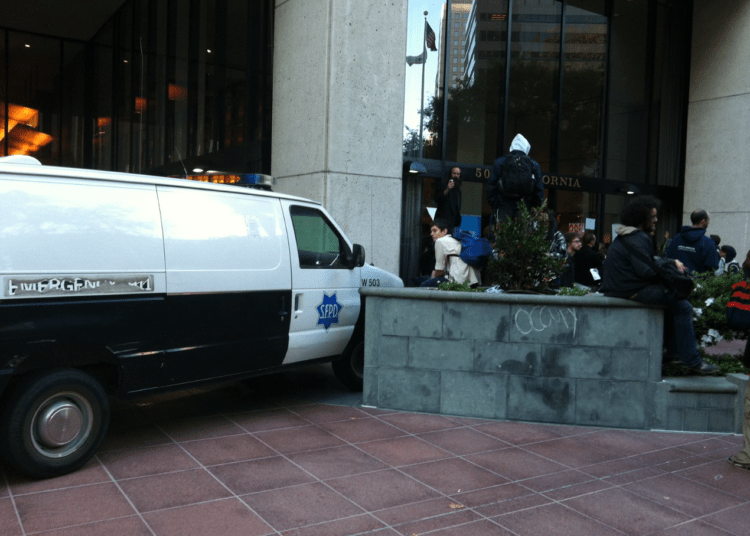 Authors note: This disclaimer is for the Police Internal Affairs Unit, the empaneled County Grand Jury, and the busy bodies at the ACLU: This is one of those “stories” that never happened, is not true, and is just imaginary.

In the 1980s San Francisco’s Mission District, being put in charge of The Wagon, where you spent your shift picking up sloppy smelly drunks, hog-tied crazy people, and violent criminals was not something you generally volunteered for.

If you had a steady beat or sector, and you screwed up enough to have the Lt. call you out after morning lineup, but not bad enough for I.A. or the district captain to get notified, then you pretty much knew that pushing the wagon for a week or more was going to be your fate.

Downside: Dealing with a perpetual assembly line of people who defecated in their pants (Mr. Stinky), screamed continuously (Miss Evelyn), spit tobacco juice at you (Tommy Two-Fingers), or were larger than a Samoan mastodon (Tuue Tuue Feta Feta).

When no one was on the receiving end of a “district level corrective assignment” such as this, the task was usually assigned to Mitch and Louie.

At first glance you’d wonder why they would happily do the thankless job that the rest of the veteran cops avoided more than being assigned to traffic control at Christmas. The answer was simple: Like most good cops, they had figured out how to game the system to their financial advantage.

Mitch and Louie would “subcontract” the use of our wagon to other districts at the end of their Mission shift, and then add the 4-hour minimum overtime bounty to their paychecks.

It may have been simple overtime greed, or the temptation to make an easy job even easier that led to the creation of the process called “Beaming.”

Or maybe it was Clarence.

I explain: Like most of the other Wagon regulars, there was a backstory to how any individual came to be day-drinking at this level. By 9:00 a.m. on any given day these guys were doing an imitation of rolled up rug splayed out on the sidewalk or draped over a bus bench in a pool of fragrant liquid.

Clarence told me in a rare moment of sobriety that he had been a writer of minor renown in Hollyweird and had actually contributed to the Original Star Trek TV series. Then he discovered the pleasures of cheap vodka wrapped in a brown paper bag and wound up on my Mission Street beat.

This explained why he was always saying, “Beam me up Scotty “or some such nonsense when Mitch was pouring him into the back of the Black Maria.

Mitch, being Mitch, after picking up Clarence for the 14th time in any given week started saying on the radio that he had to “Beam “Clarence to County detox, or SFGH, or the drunk tank at Mission.

Needless to say, the phrase caught on.

Late one afternoon, just before Mitch and Louie had a lucrative overtime wagon deal planned, they somehow got behind on their “deliveries,” and had about 10 hobos still in the back of the wagon with only a short time before their cash register started ringing elsewhere.

Clarence was somewhere in the pile of drunks in back, and he called out to Mitch to “Beam me “ home.

At that exact moment, as fate had it, their wagon was on Divisidero Street, where the southern side of the road was Mission property, and the northern side belonged to the Southern District cops.

Suddenly, as they both now had evil grins on their faces, they drove their Mission Wagon two blocks into the formally innocent Southern District, opened the wagons rear doors, and helped their load of winos discover a new and wonderful territory to roam around in.

“The American Friends Mission is three blocks that way, gents.”

Thus, the underground practice of Beaming was born.

None of the blue suit locker-room lawyers present could find a specific policy violation that was being bent, and Mitch could always claim that he was simply taking his detainees to a different alcohol treatment location, rather than the chronically over-worked Mission De-Tox Center.

The fact that any one of us could be assigned to the hated Wagon Master job, and that Mitch and Louie had found an (almost) legitimate way of reducing the workload of a very undesirable assignment resonated with this audience of cops.

Louie subsequently bought a round of drinks with his bloated overtime paycheck, and we all agreed to keep this whole topic on the downlow.

My colleague, and occasional beat partner BD was currently married to a police radio lead dispatcher. In that their day shift also drank it up at this bar, it took only a little more liquid lubricant (paid for by Mitch) to ensure that no questions were asked about what the heck “Beaming” was from their direction.

Like any good thing in the police world, anything worth doing becomes soon overdone.

It wasn’t too long before the Southern District cops began noticing a sizeable increase in their own proprietary cluster of winos and drunks. Questions got asked, and their a-ha lightbulbs grew brighter.

Suddenly, we began seeing strange faces staggering down our streets, and when these celebrants were interviewed, the scope of Southern’s revenge were plain to see:

“No this isn’t Sixth Street, put that thing away, pull up your pants, and head north!”

None too soon, Mitch and Louie had a confab with their counterparts from our neighboring district, and it was decided that now BOTH wagon crews would Beam their custodies into the Northern District instead.

The illicit crescendo of this practice was when someone decided to “share the wealth” and transfer the problem of our too many drunks with a neighboring non-San Francisco City jurisdiction.

At that place in time, there was a Southern Pacific Railway marshaling yard that was between the Mission and Southern areas. The SP cops were stretched even thinner than we were, so even though they had an office in the yard, you rarely saw any of those guys.

Borrowing from a literary cliché’, it WAS a dark and stormy night when allegedly an overloaded drunk wagon backed up to an open SP freight car, and about 20 substance abusers were encouraged to ride the rails.

The story goes that a bag of stale donuts, and a gallon bottle of Dago Red was thrown in the previously empty car which encouraged the exodus. For safety’s sake, the sliding door was sealed.

The town of Gilroy is about 90 miles, and three hours south of my city, which happened to be the first place this train stopped.

Gilroy PD: “No, this isn’t South San Francisco or Millbrae, and where the hell did all you guys come from?”

Fortunately for all concerned, the Gilroy cops had our usual professional dark sense of humor. Instead of making a big deal about the tourists who descended on them, their street sergeant (who happened to be the head of their police union) called the head of our police association, and a sub-rosa discussion was held.

Clarence was back on his bus bench at 20th and Mission soon after and was telling anyone who would listen how beautiful artichoke fields were in the moonlight of the Salinas Valley.

Get in the Mission Wagon and see the world!