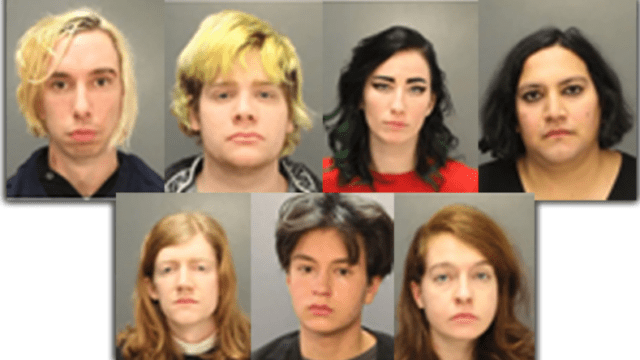 PHILADELPHIA — At least seven people have been charged in connection with purported pro-Antifa vandalism of federal buildings in Philadelphia on New Year’s Eve, police said.

Dozens of black-clad demonstrators swarmed a trio of federal buildings in the City of Brotherly Love on Thursday night, according to police. The buildings included the Robert Nix Building and other federal facilities.

Graffiti messages included the acronym “ACAB,” which stands for “all cops are bastards.” The vile comments were spray painted on a sheriff’s vehicle, according to the Philadelphia Inquirer.

Just before 9 p.m. on Dec. 31, police said “a large disorderly crowd” had gathered around the Robert Nix Federal Building on the 900 block of Market Street. Adam McVicker, 25, threw a brick breaking multiple windows, causing about $3,000 in damage, police said in a statement.

He allegedly ran off with three other people, who have been identified as a New Jersey man named Dustin Callahan, 24, and Allison Donohue, 23, and Josey Augustine, 31, both of Pennsylvania. Police said they found a can of yellow spray paint with McVicker. They all have been arrested on criminal mischief and other charges.

Two other women and a man were arrested with spray paint on their clothing, police said. Most of the suspects were in their early- to mid-20s. The oldest was 31.

One of them, 25-year-old Jacob Robotin, was allegedly carrying flammable objects and a bag of a white powder labeled “Fire Starter,” according to police. Consequently, he was taken into custody along with Sydney Miller, 22, and Meredith Tooker, 26.

Those three were charged with attempted arson, risking catastrophe, conspiracy, and other offenses, police said.