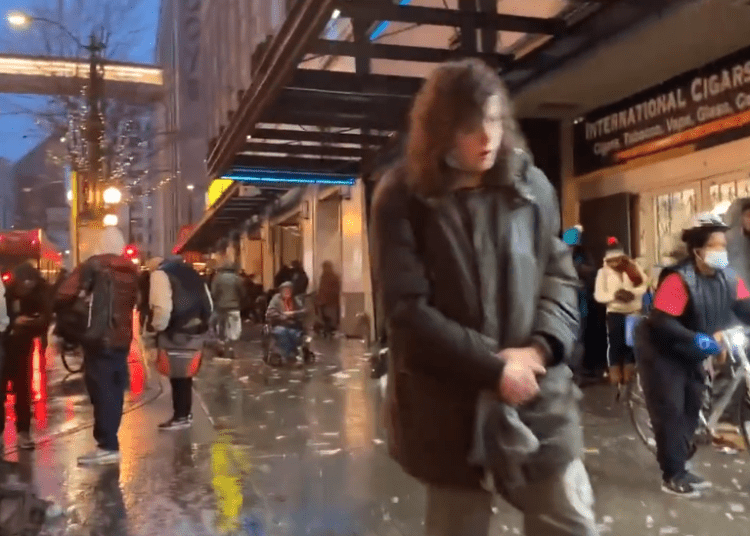 Amazon is moving employees from their office in crime-ridden downtown Seattle. (Twitter)

SEATTLE – Amazon is relocating employees from a downtown Seattle office to a safer location due to ongoing violent crimes. The tech giant says the movement is temporary, but others aren’t so sure.

The company emailed Bloomberg with an explanation behind the move and their hope that conditions will improve so workers can return.

“Given recent incidents near Third and Pine, we’re providing employees currently at that location with alternative office space elsewhere. We are hopeful that conditions will improve and that we will be able to bring employees back to this location when it is safe to do so.”

ADDING INSULT TO INJURY: For those who don’t believe how bad it is or are dismissing the plight of biz owners like Olga Sagan at Piroshky Piroshky, please come down and try running a legit biz in conditions like these. Downtown Seattle is toast if this continues. @komonews pic.twitter.com/OkJ7wXNSb2

The Amazon office located at 300 Pine St. in the heart of downtown above the city’s iconic Macy’s department store location is home to about 1,800 employees, Post Millennial reported.

Many Amazon personnel continue working from home due to the pandemic but have begun returning to the office several days per week.

Put streets been taken over by crime – we can not run @PiroshkyBakery in a safe way anymore pic.twitter.com/edAaIcpwlS

The area in downtown Seattle has seen increased open air drug use, exchanges of stolen property, shootings, carjackings, quality of life crimes as well as violent crimes over the past few years.

“With the transients and drugs addicts walking around unfettered, it looks like a zombie apocalypse,” a visitor to the area told Law Officer. “It will not change unless political leaders have the common sense to say ‘enough is enough.'”

According to the Post Millennial, there have been three shootings, two stabbings and a carjacking since Feb. 21, leading to an increase in businesses shutting down in the area.