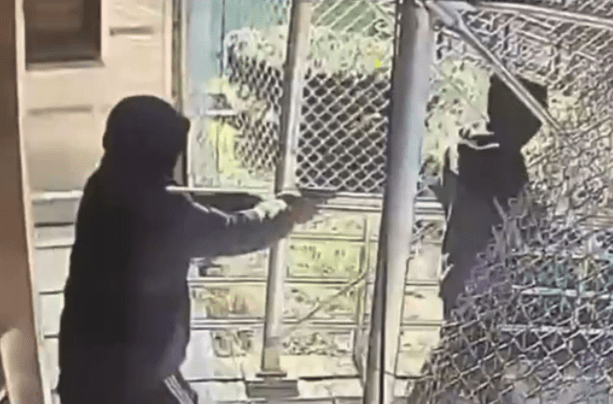 Surveillance video released by the NYPD shows the shooting of a FedEx delivery driver in Brooklyn. (DCPI)

NEW YORK — An alarming video shows a FedEx driver walking out of a Brownsville apartment building as a gunman opens fire.

The 44-year-old driver was delivering packages to 395 Livonia Ave. in the Van Dyke Houses when he was hit by gunfire around 11:15 a.m. – in what appeared to be a targeted attack from the video released by the NYPD Tuesday.

The video, tweeted out by Chief of Detectives Rodney Harrison, shows the gunman holding the door for a woman and the FedEx driver, pulling out his firearm after the driver exits and opening fire, New York Post reported.

Yesterday in the confines of the @NYPD73Pct, at approximately 11:15 a.m, a FedEx delivery man was exiting 395 Livonia Avenue, when he was shot in the back of the neck.  @NYPDShea @NYPDChiefofDept @FedEx @NYPDChiefPatrol @NYPDPSA2 pic.twitter.com/mcPIVvnGh5

The driver was struck in the back neck and taken to Brookdale Hospital in serious but stable condition, police said.