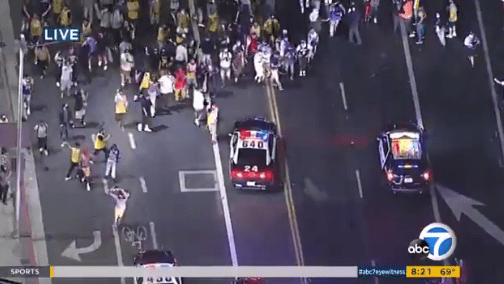 LOS ANGELES — On Sunday night, after LeBron James, Anthony Davis and the Los Angeles Lakers won the NBA title, thousands of fans of the team celebrated outside the Los Angeles Staples Center, but things turned ugly when some members of the crowd targeted police, hurling rocks and bottles at them.

“LAPD went into tactical alert and declared the gathering an unlawful assembly,” according to KABC. “Cars were seen performing ‘donuts’ and ‘burnouts,’ some cars were swarmed by fans in the streets. Multiple fireworks were set off and there were isolated reports of small groups throwing rocks and bottles at police.”

On Friday, Garcetti stated that fans should not jeopardize “all the progress we have made in our fight against COVID-19 isn’t reversed from one night of celebration. I encourage you to yell at the top of your lungs inside your homes, maybe even open up the window or step outside your door as we’ve done for our first responders and essential medical workers to thank them. Let’s thank the Lakers when they win, but let’s do it safe,” The Daily Mail noted.

“The mob started as a few intoxicated and rowdy Lakers fans began throwing beer bottles and other ‘projectiles’ at uniformed police officers that swarmed the arena,” Bleacher Report noted. “The few isolated incidents soon grew to a large mob of sports fans which soon made their way down the streets of Los Angeles turning over police cars and breaking into local businesses. Some innocent bystanders became injured in the incident as the horde came rushing down the streets.”

“The police soon responded with riot gear and shots of tear gas which were thrown into the mass of hysterical fans. In all, the damage that was caused that night was in the millions, and left sports fans around the country with a bad taste of how immature the win was handled by the city.”