"Things break down really quickly without police and without that protection," says the well-known comedian. 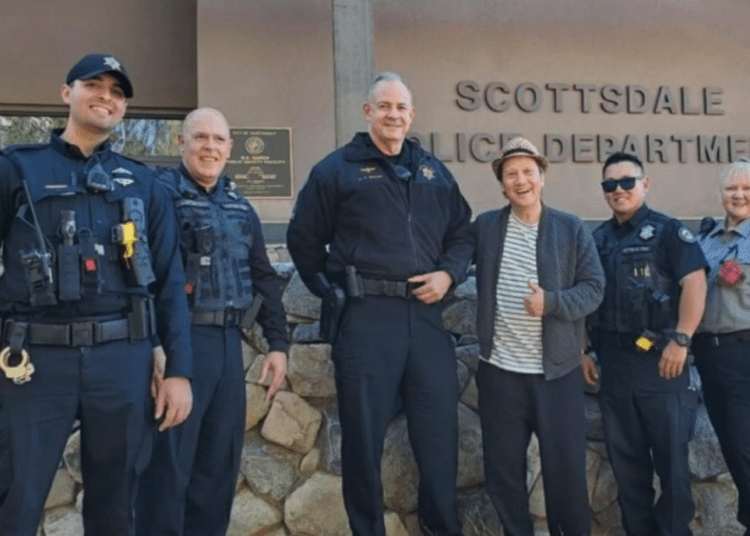 Actor and comedian Rob Schneider with members of the Scottsdale Police Department. (Twitter)

SCOTTSDALE, Ariz. — Officer Paul Lee responded to the call of a “disabled vehicle” in North Scottsdale on Dec. 22 and was surprised to find actor and comedian Rob Schneider who was standing outside his vehicle.

Officer Lee said in an interview Tuesday that speaking with Schneider was a “nice interaction” in a time with “a lot of negativity.”

A huge THANK YOU to Scottsdale Finest @ScottsdalePD for all your help today when my car broke down! Thanks, Officer Lee! YOU CAN DO IT!! pic.twitter.com/F4hj5hNX3M

Schneider also showed his appreciation for law enforcement officers Thursday during a televised interview after his Tesla broke down and he required assistance.

“These are just really good, hardworking Americans – their job is to protect citizens who don’t listen to their wives, like me, and get stuck on the side of the road,” said Schneider. “I’m grateful to the Scottsdale PD.”

When asked by Lawrence Jones during the interview about his thoughts on anti-police rhetoric that has saturated the country, Schneider said he believes much of the vitriol is “unwarranted,” Fox reported.

“Things break down really quickly without police and without that protection. You’re gonna need that. You’re gonna want that. And I do think that they’re maligned, and it’s unwarranted,” said Schneider.