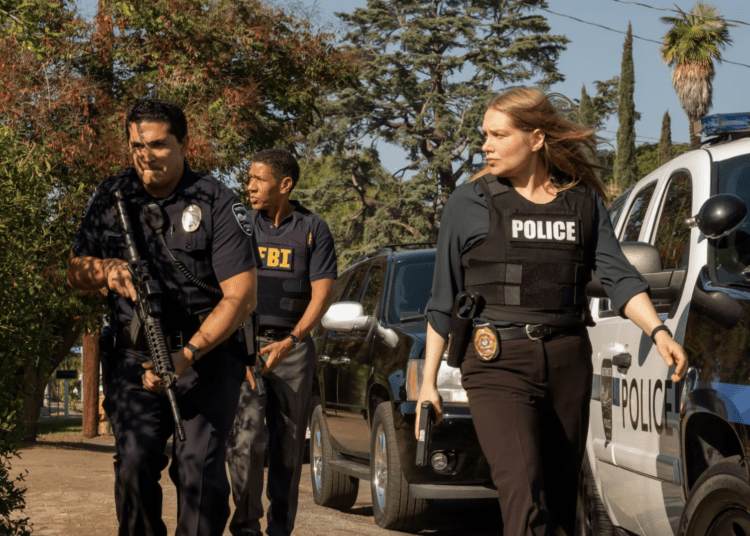 I’m a huge fan of what movies and TV seem to think goes on in my profession, mostly so I can laugh or comment out loud how absolutely wrong most of what these people seem to think happens in our streets and alleys.

It’s gotten so bad recently that my girlfriend refuses to watch TV with me due my heckling and derisive commentary.

F’ instance: I see many massive gun fights with our faux heroes in blue that no doubt draw in the Chuck Norris and Bruce Willis fan base. Of course, as soon as the gun smoke clears, (and the attractive female hostage is rescued), the responding officer here goes nonchalantly back on patrol.

Yes, I’m looking at you the writers of the LAPD based TV series “The Rookie.”

Authors note: I was involved more than a few Critical Incidents during my career including a very serious gun fight that lasted an incredible 25 minutes at the corner of Pine and Franklin streets that killed a friend of mine and wounded several others. Each event that I experienced took days even weeks to document, diagram, interview, and investigate. Nobody went “right back on patrol.”

Half the time, if you even drew your gun, it got seized for ballistics tests because, well, cops “sometimes forget that they fired their gun.”

Then there’s the prevalent “only cop in town” syndrome. That’s when our diligent impeccably quaffed and dry-cleaned patrol officer drives WAAAAY across town to handle a low priority call for service or to run a personal errand such as seeing a romantic partner.

I don’t know how most departments worked, but it took an “act of God” and a major favor owed to my Street Sergeant for me to even motor out of my assigned sector to have lunch with my wife.

(Unless I was tasked to pick up a special off-brand type cigar for the Senior Lieutenant, then all District boundaries and policies were ignored.)

Maybe it’s the fact that I was a FTO (Field Training Officer) but when I see a  novice patrol officer on TV doing complicated detective work, getting assigned to a high-profile detail such as driving VIPS around, or (shudder) working solo in a high crime area, that I professionally cringe.

Being the proud home of the “Bullitt” movie car chase sequence, my SFPD colleagues and I are naturally sensitive to the excesses of Hollywood inspired police pursuits.

The obviously un-official “Steve McQueen Memorial Street Demonstration” lasted only a few interesting years where plain clothes investigator assigned cars tried to duplicate the movie jumps and car cornering moves. This continued until the number of body damaged cars with wretched shock absorber systems exceeded the “favors” and bottles of supplied liquid courage that the shop people could safely  ignore.

For a while after this, every ding, nick, and scratch was anally retentively investigated not just by the District level folks, but by the Departmental Fleet Management people. At one time, to document damage to the 24/7 working marked police cars, some bright light downtown had us taking polaroid photos of our cars before and after each shift.

Notwithstanding that this was a huge waste of film and time. This silly policy was in place until an eagle-eyed Fleet minion noticed that ALL of the photos coming in from Southern Station were of the same numbered patrol vehicle which was sitting innocently totally un-driven in a corner of the maintenance yard.

I’ve been asked on several occasions: Could you commandeer a citizen’s vehicle?

Ahh, if only it was possible!

“Excuse me Amigo, but I need to borrow your V-8 427 Hemi-Cobra AC to get somewhere FAST “

The closest thing I ever did along this line was to get very tired chasing a guy on foot down Juri Alley in the Mission District one hot afternoon after he mugged a Grandma type almost in front of me.

He was 17, in decent shape, while I was definitely not either one.

I was wearing full Kevlar body armor, a 20 lb. Sam Browne duty belt, and had just polished off a football sized Burrito-Grande.

So, when I saw a guy driving past me on a very old school BMW motorcycle, I LITERALLY stuck out my hitch-hiking thumb.

Red in the face, and panting as hard as I was, the guy in the old moto-leather coat who was also wearing a beany helmet and aviator goggles finally got the gist of what I wanted when I said:

Mr. Leather Coat biker grinned like the proverbial Cheshire Cat and told me to get on the back of his bike, and ” HANG ONTA YURE HAT BROTHER!”

Zero-to-Oh-Ma-Gawd took about 3 seconds, while he dodged big plastic milk cartons and the occasional proned out drunk hobo.  About a block later we actually passed the kid I was chasing for about a millisecond

I grabbed the guy in passing, and naturally we both went to the ground at about 25 mph.

After barrel-rolling together a bit on the ragged alley concrete, I got lucky enough to wind up more or less on top. Since the purse-snatcher was a tad more dazed that I was, it didn’t take me long to cuff him up, and put out an end-of-pursuit radio call.

The biker now had a BIG grin on his face, and after saluting me, he took off with a squealing real tire while waving a two-fingered peace sign with his left hand.

Naturally, the arrest report was accurate, and my Sgt. loved the part where I put down that a citizen “assisted ” me in the pursuit.