60 Officers Shot and Killed This Year—20 Were Ambushed 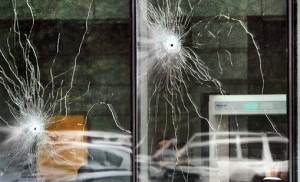 Photo: Scene after the first shooting fatality of an officer in 2016, in West Virginia.

Sixty law enforcement officers have been shot and killed—including 20 in ambush-style attacks—according to data from the National Law Enforcement Officers Memorial Fund.

Alarmingly, the number of ambush-style attacks has increased 150%.

Craig W. Floyd, president of the National Law Enforcement Officers Memorial Fund, pointed out that only 8 ambush-style attacks occurred in 2015, according to a Fox News report.

Floyd also noted that the number of targeted killings of law enforcement officers is the most since 1995.

Nick Breul, the Memorial Fund’s director of officer safety and wellness, reported that, “In all the cases, the officers were essentially assassinated before they had any contact with the suspect or placed that suspect in jeopardy.”

The complete list of Preliminary 2016 Law Enforcement Officer Fatalities
indicates that the shootings of officers occured in 33 states, and that no region of the country has been spared mourning the loss of an officer.

2016 Firearm-Related Fatalities of Officers by State

With respect and regret, details about most of these incidents can be found in the Officer Down section of LawOfficer.com.

Share and speak up for justice, law & order...
Tags: fatalitiesfirearmNewsofficershootings