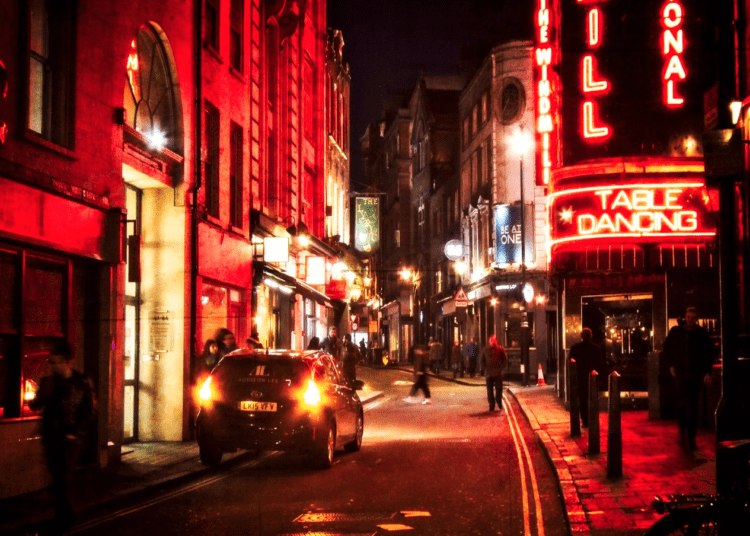 byJimmy Meeks
Share and speak up for justice, law & order...

One of the things I enjoyed about police work was the “unpredictability factor.” Unlike most jobs, an officer never knows what to expect while cruising the streets. Such was the case in my life one hot Summer day. Dispatch sent me to deal with a woman standing in the center median begging for cash. Sure enough, upon arrival, she was there.

I pulled up beside her and informed her what she was doing was unlawful. I then instructed her to go to a nearby parking lot and I’d meet her there. I whipped a U-turn and soon struck up a conversation with her.

It was obvious that Linda’s clothes had not seen the insides of a washing machine in quite a while. In like manner, her body had not experienced a washing for quite some time either. She told me she was at this particular intersection because it was profitable.

I soon learned that she had other means of making money, also. She was a stripper and also provided sexual services for the right price. She wasn’t proud of any of it, and admitted life had been hard on her. Put simply, she was “down on her luck.”

I asked if I could contact her parents, but she replied they were both dead. She had children, however, she added, they had been taken from her.

“Could I take you to the downtown shelter,” I asked. She quickly shot back: “Please … not there. I have nice teeth and the men will force me to perform sex acts on them” (I was completely caught off guard by that).

Linda could barely hold herself up. Life had taken a toll on her. Dirty clothes, a dirty body, nowhere to go, and no one to be with. At least no one who cared.

I got an idea.

“Linda, when is the last time you had something to eat? Are you hungry…?”

Her demeanor drastically changed and she almost broke down. Leaning forward, while holding her stomach, she replied: “I haven’t eaten in days. I’m SOOO hungry.” It looked as if she was about to cry.

“Hey, I got an idea. Hop in my police car and I’ll take you across the street to that convenience store and you can get all the food you want. And I’ll foot the bill.”

Another demeanor change instantly occurred: a bashful smile broke out across her face.

She happily jumped aboard and I drove her across the street. When she got out, I told her to go and load up all the food she could hold. She rushed inside, acting like a little girl who had just been dropped off at a toy store. Pacing back and forth across the store, she grabbed as much food as she could handle: a sandwich, chips, candy bars.

She approached the counter with food in tow. “Linda, you didn’t get any donuts. The donuts here are great. I eat them all the time.”

She grabbed a donut or two and then re-approached the counter, laying all the items before the cashier.

That’s when I noticed something: everyone in the store had eyes on me and Linda.

The cashier rang up the food and I covered the bill, which only amounted to about 15 dollars. Linda grabbed both bags and we headed out the door.

And that’s when “it” happened.

Two men stood just outside and opened the door for us. Linda exited first and then came to a dead stop. She quickly turned toward me and blurted out –

“Officer Meeks, Can I hug you?”

I was completely caught off guard and paused for a second or two. The men holding the door stared at me, awaiting my decision on her request. Her voice had been so loud that everyone inside had ceased their shopping and turned toward me. I could hear their thoughts: Is that officer gonna’ hug … that … dirty ole girl?

It was an easy decision.

“Of course you can.”

With both bags in hand, she reached out and hugged me tightly. She held on for a moment, as if she were drawing something from me she so desperately needed. There is no telling how long it had been since a man had hugged her … with no expectation of sexual favors.

I gave her a ride to the train station and bid her farewell. I never saw Linda again.

Odd, is it not, all the names the world has for us Christians. They call us things such as …

But the one name you will rarely, if ever, hear them call us is the same phrase they used for Jesus: Friend of Sinners.

Jimmy served as a police officer in Shawnee, Oklahoma for five years. After graduating college (Okla. Baptist University) he moved his family to Fort Worth, Texas. Two months later, he became a police officer with the Hurst, Texas PD. He retired from Hurst in December of 2015. Jimmy is the founder of Blue Life Support.

Share and speak up for justice, law & order...
Tags: graceJesusmercyprostitute

Jimmy served as a police officer in Shawnee, Oklahoma for five years. After graduating college (Okla. Baptist University) he moved his family to Fort Worth, Texas. Two months later, he became a police officer with the Hurst, Texas PD. He retired from Hurst in December of 2015. Jimmy is the founder of Blue Life Support.