One detective is listed in critical condition 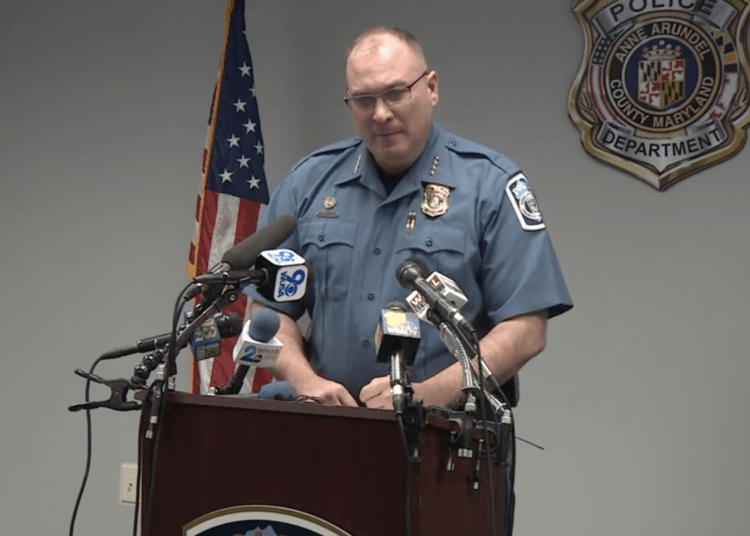 County fire officials said a call was dispatched around 11:07 p.m. and two detectives were taken to Shock Trauma.

During the preliminary investigation, police realized the victim’s vehicle was missing. About six hours later, the vehicle was found in the Fort Smallwood area of Baltimore.

“Detectives went to initiate a traffic stop on that suspect. That suspect fired on officers, striking a detective. He has been transported to an area hospital. He was able to break off the pursuit to get medical attention,” Davis said. “A second detective continued the pursuit of the subject, who was shooting at him, chased him into the Stoney Beach community, they exchanged gunfire again and that detective was also shot. So we have two detectives shot. Our suspect is still outstanding in the Stoney Beach community.”

The second shooting was in the Stoney Beach community.

“Anybody in that community, look out your windows. If you see somebody in your yard give us a call. We consider him armed and dangerous. He shot two of our guys. He’s armed, he’s dangerous, and we’re out looking for him,” Davis said.

UPDATE: A suspect connected to an early homicide case on Newfield Road is wanted after shooting two @AACOPD cops when they tried to arrest him. The cops are in stable-condition. The suspect is at large and was last seen in the Stoney Beach area. @wbaltv11 pic.twitter.com/Xt7rtToHGG

Chief Timothy Altomare urged the shooter to turn himself in to police.

“We’re going to hope and pray with everything that we have that they’re going to stay that way,” Davis said.

Around 50 officers are in the area, going door-to-door to talk to residents.