'He changed my life in a lot of different aspects and gave me a different outlook,' said the rescued man who grew up disliking police 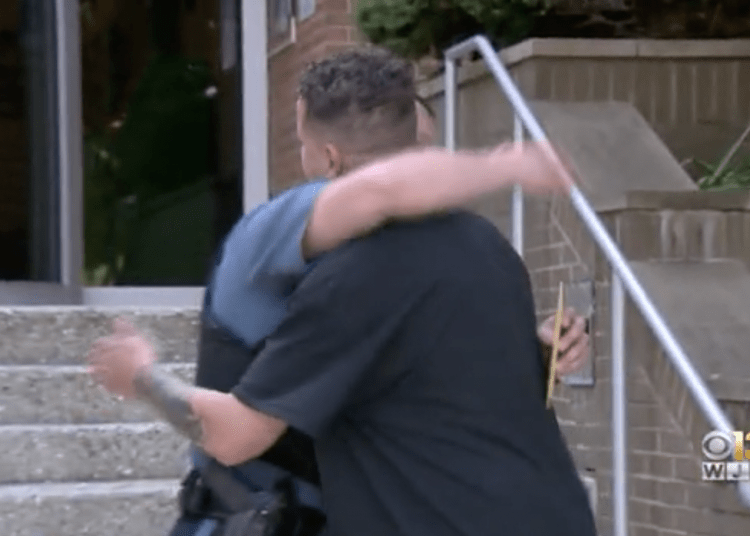 Jeff McGuire embraces Officer Pat Hannigan who saved his life when he pulled him from a burning car early Sunday. (Screenshot WJZ)

GLEN BURNIE, Md. — Anne Arundel County Police Officer Pat Hannigan was in Glen Burnie early Sunday morning when he saw a car on fire after a crash on I-97. Without hesitation, the sheepdog ran to save the man inside.

“I got there. I saw the car and the only thing I thought was I need to get this person out,” Officer Hannigan told WJZ. The outcome changed the perspective of the citizen who was unable to rescue himself.

The man trapped inside the burning automobile was Jeff McGuire. The driver’s side door of his Honda Accord was jammed and inoperative. Moreover, the passenger side of the car was ablaze. Suddenly, out of nowhere, someone’s hand reached in and grabbed him.

AACOPD – This morning around 2:30 a.m. Eastern District Ofc. Hannigan pulled a driver out of burning vehicle on I-97. There were no serious injuries in the crash. We salute Ofc. Hannigan for his bravery and courage while serving our community. #Courage #ServiceOverSelf #WhoWeAre pic.twitter.com/VHGApbVX39

“He changed my life in a lot of different aspects and gave me a different outlook,” said McGuire. “I shouldn’t be walking away alive at all, and I am, and I’m grateful for what he did.”

McGuire reached out to Anne Arundel County Police. He wanted to offer his gratitude in person to the officer who saved his life. On Thursday, the emotional reunion occurred, according to the news outlet, as the rescued man offered an honest perspective afterward.

“I grew up not really liking cops at all but my outlook on cops is totally different now,” said McGuire.

And the officer articulated why he entered the profession.

“That’s why I became a police officer to do that and help save lives. Even if it’s 1 or 2 lives I’m able to touch that’s what really matters,” said Officer Hannigan.

As a result of the traumatic crash, McGuire has some bruising to his arm and abdomen, Law & Crime reported. However, in a situation that was life or death, he’s grateful that he walked away with his life.

“I appreciate Hannigan so much. So does my sister, brother, stepmom and all my friends,” said McGuire.

Mother charged in murder of children after decomposing bodies found