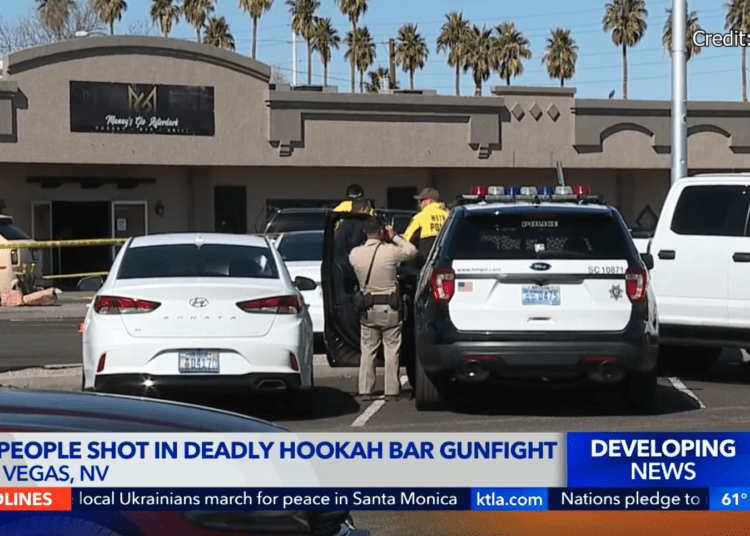 LAS VEGAS – A gun battle broke out at a Las Vegas hookah lounge early Saturday. Fourteen people were shot, including one man who was killed, according to reports.

Preliminary information indicates there was a party during which two people got into an altercation about 3:15 a.m. As a result of the dispute, the individuals exchanged gunfire, according to said Capt. Dori Koren of the Las Vegas Metropolitan Police Department.

Among the individuals who were shot, one person is dead and two others are in critical condition, KTLA reported.

Police have not made any arrests in the case and no suspect descriptions were immediately available, although Koren told reporters they do not believe there is any further danger to the general public.

Officers not only secured the scene, but rendered life-saving medical aid, including applying tourniquets and administering CPR, Koren said.

According to the police captain, the medical aid provided to victims by responding officers “definitely made a significance in this case.”

Other than previous information that two victims were critical, no further medical updates were provided.

It’s unclear if detectives have good leads on the suspects as they also try to determine the types of weapons used in the shooting. It’s also unclear if the perpetrators are among the wounded.

”It’s a fairly large scene so it’s going so take some time to go through the entire scene,” Koren said. “We’re not really sure exactly what kind of weapon was used, or exactly if there were two shooters. We believe there was an exchange of gunfire, but we’re still looking into all of the information.”

Koren expressed confidence the suspects would be captured.

“I can assure you they will be caught,” he said. “Our agency takes a lot of pride in the fact that our homicide section has the best solvability rate in the country.”