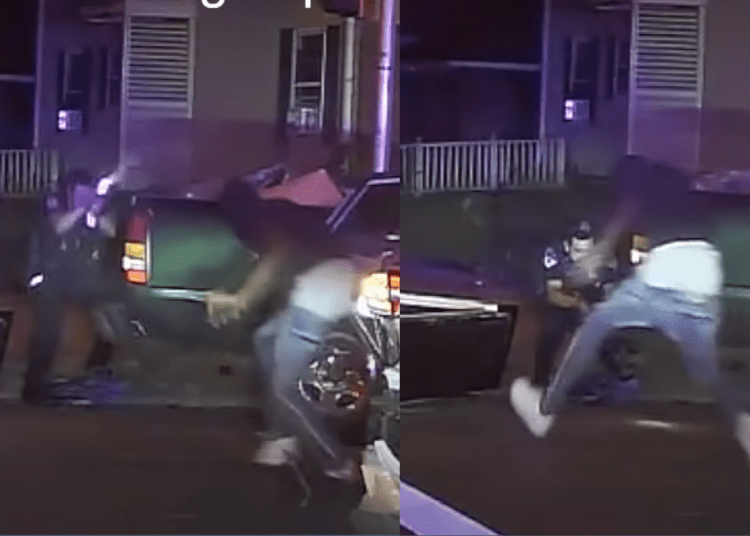 GREENFIELD, Wis. — The Greenfield Police Department in Wisconsin released footage of an officer-involved shooting, which left one officer severely injured and the suspect dead, to highlight the violence and dangers police face while apprehending criminals and protecting the community.

The video from Aug. 22 showed the unidentified officer suffered multiple gunshot wounds while trying to apprehend a fleeing felon after the suspect — later identified as Tyran Lamb, 31 — blew through a red light and caused a horrific collision.

Officers ordered Lamb to show his hands 18 times in their effort to take him into custody, the Milwaukee Journal Sentinel reported. However, he chose to engage in a gun battle while trying to get away.

After firing through his windshield at an officer, Lamb exited his car and jumped over the injured officer while continuing to wildly fire at him. Two other officers involved in the pursuit then shot and killed Lamb near the crash.

The officer sustained injuries to his leg, hand, chest, and face according to conversations between the wounded officer and his partner.

“What you’ll see in this video is the kind of danger police officers face every day. You will see their bravery. Their heroism. Their commitment to this community,” police chief of the Greenfield Police Department, Jay Johnson, said in a video showing the scene.

Lamb was released from the state Department of Corrections in May 2020. He pleaded guilty in 2017 and 2019 to felony charges of fleeing the police in Milwaukee County, according to the Milwaukee Journal Sentinel.

Chief Johnson did not identify the officers involved in the harrowing shooting, but said the injured officer is 36 years old with three years of experience on the force.

The injured officer remains at home nursing his wounds, but is expected to make a full recovery.

Meanwhile, Louisiana Master Trooper Adam Gaubert was shot and killed on Saturday, in what police described as an ambush attack, Law Officer reported.

“Trooper Gaubert embodied everything we stand for; honor, duty, selfless service, and courage. In the days ahead, we will mourn his tragic death and honor his service to our department and the citizens of Louisiana,” a statement on the agency’s Facebook page says.

Police around the nation are also uniformly coping with staffing shortages, which officials broadly attribute to the anti-police sentiment that has swept the country over the past 18 months.

Research conducted by the Law Enforcement Legal Defense Fund shows an alarming increase in resignations and retirements, according to Law Officer.

“Police are being vilified across the country, they’re being painted as racist occupiers, just going in like an occupying army, trying to disrupt communities when it’s exactly the opposite. They’re being demonized and vilified by politicians,” Angel Maysonet, 22-year veteran of the NYPD said in April, Fox reported.