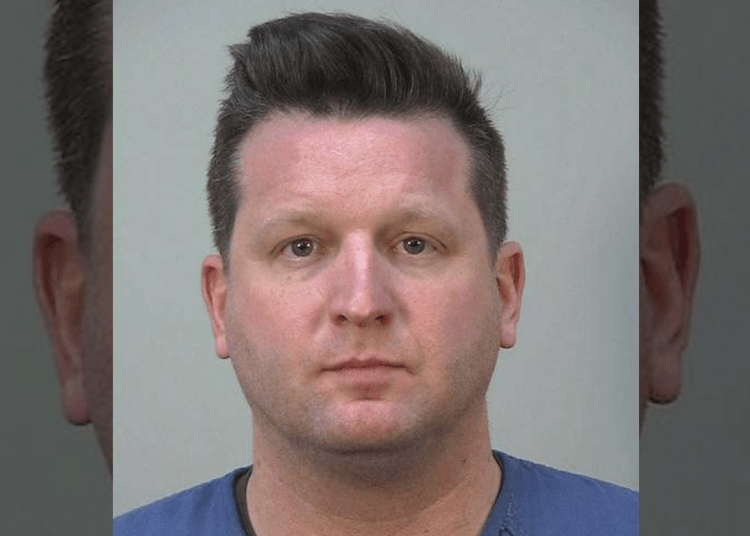 Be forewarned that the details in the complaint are extremely graphic and disturbing. You can read it in full here: 2021CF000647 COMP Brett B.

A Dane County Court Commissioner, over the objection of a prosecutor, allowed Blomme to have unsupervised contact with his two young children, refused to ban him entirely from Internet use, and gave him a $500 signature bond. Read more about that hearing here.

Blomme, a well-known Democratic LGBTQ activist who was elected to the Milwaukee County bench in spring 2020 after endorsements from prominent Democrats and funding from the state Democratic Party, was charged in Dane County. That’s because he maintains a residence there in Cottage Grove (the issue of where he actually lived was a controversy during the election, in which he defeated a Scott Walker appointee.) Before he was elected judge, Democratic Milwaukee Mayor Tom Barrett pitched Blomme for a judicial appointment he didn’t get and named him chairman of a major city zoning board.

According to the criminal complaint, a special agent with the Wisconsin Department of Justice began an investigation into a CyberTip provided by the National Center for Missing and Exploited Children. It indicated that a Kik messaging application user “dommasterbb” uploaded images and videos consistent with child pornography on 27 separate occasions in October and November of 2020.

The files were sent to other Kik users through private chat messages or shared in a messaging group, the complaint says.

According to the complaint, Kik provided to authorities several different IP addresses used by dommasterbb to download and share the images and videos. It was determined that two of the addresses “were provided by a Milwaukee County government building.”

The complaint contains extremely graphic details on the videos. We are sharing some of the details to make the gravity of the alleged offenses crystal clear to the public, due to Blomme’s powerful position over the fate of children. According to the complaint:

One video was 1 minute and 37 seconds in length. It showed a close view of a “young prepubescent Caucasian boy’s anus area” with an adult Caucasian male performing oral sex on it. The man then had sexual intercourse with the boy and masturbated near the boy’s buttocks.

The second video was 1 minute and 53 seconds in length and showed a “young prepubescent Caucasian boy on a turquoise-colored cloth.” An adult Caucasian male ejaculated on the boy and then tried to have sexual intercourse with him.

The third video was 1 minute and 58 seconds in length. It showed an adult Caucasian male lying on his back on a bed. He was not wearing pants. A young Caucasian prepubescent boy, wearing a neon green shirt, was between the male’s leg. The male “was holding the boy’s head with his hands” and the boy’s tongue was touching the man’s penis. The boy pulled away and began rubbing his eye. The man motioned for the boy to come back and held the boy’s head on the side of his genitals.

The fifth video was 1 minute and 38 seconds in length. It showed a toddler-aged Caucasian boy laying on his back on what appeared to be blankets. He was wearing a Mickey Mouse shirt but no bottoms and his face was red and showed he was crying. He was crying through the audio of the video. An adult Caucasian male was shown having anal sex with the boy as the boy continued to cry. The boy pushed his hand against the male, appearing to be pushing the male away. The male told the boy to move his hand and continued to penetrate the boy while the boy cried.

The sixth video was 37 seconds in length. It showed an Asian toddler holding toys. An adult Caucasian man used his hand to grab the toddler’s hand to force the toddler to have oral sex with him.

The seventh video showed a prepubescent Caucasian boy with short blond hair and blue eyes who was laying on his back on a blue cloth. He was not wearing any bottoms and his private parts were exposed.

Pre-pubescent describes a child who does not exhibit or only has very limited physical and sexual development.

The email that shared and downloaded the videos was used to communicate multiple times with the Cream City Foundation, according to the complaint. In October 2020, the email was used to send an email with the subject line “Blomme PSLF Call.” Within the body of the email, the writer provided a phone number. Blomme is the past president and CEO of the group.

The email account also exchanged emails with a printer requesting the return address for envelopes as Blomme for Judge.

The agent also observed numerous email communications between the individual email account, another person and employees from their children’s school. At the bottom of one of the emails was the signature line, Brett Blomme.

The email also was used to write employees of a plumbing company asking about a quote. Blomme provided his phone number.

There were email communications regarding Blomme’s residential address in Cottage Grove with shipping sent to Brett R. Blomme.

A person known as Individual B is a friend of Blomme and showed the agents text message conversations individual B had with Brett Blomme regarding days Blomme was at Individual B’s house in Milwaukee. Some of those dates coincided with the dates from the Kik records when dommasterbb used individual B’s internet service to upload child pornography videos and images, the complaint says.

Blomme’s website bio states: “Prior to serving as Circuit Court Judge, Brett was the President & CEO of Cream City Foundation (CCF) in Milwaukee. He has over 15 years of experience in litigation, philanthropy, community organizing and nonprofit management. Before joining CCF, Brett served as the Director of Major Gifts for the AIDS Resource Center of Wisconsin (ARCW), a Milwaukee-based AIDS service organization.”