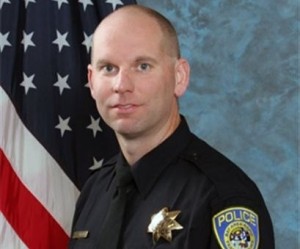 OAKLAND, Calif. (AP) — The widow of a veteran San Francisco Bay Area Rapid Transit police officer who was fatally shot says she cherished every moment with him, while his brother says he feels for the family of the officer who accidentally killed him.

"If you're lucky to find the love of your life, you hold onto it. I did," BART Police Sgt. Tom Smith's wife, Kellie, told KPIX-TV in an interview at the family's East Bay home. "I cherished every moment we had."

Kellie Smith spoke publicly to reporters for the first time on Wednesday afternoon.

"Tommy will always be in my heart, and I'll love him forever," she told the TV station. "He was the love of my life."

Kellie, who is a canine patrol officer with BART Police, was joined in the interview by Tom Smith's brothers Patrick and Ed and his brother-in-law Todd Shaheen. Patrick Smith is a field training officer with the Newark, Calif., Police Department, while Ed Smith works for the Alameda County Sheriff's Department.

Patrick said his heart also goes out to the officer who accidentally shot his younger brother on Tuesday.

"We're going to mourn the loss of our brother. We'll never forget him," he said. "But there's someone else in another family that's affected by this, too, and I feel sorry for them."

Tom Smith, who was fatally shot by another officer during a search, knew the dangers of the profession and once remarked that it was fortunate that no agency officers had been killed on the job, colleagues said Wednesday.

He was also described as a respected, sincere, passionate and sometimes opinionated person who always looked out for others.

"Tom knew that law enforcement was incredibly dangerous," BART Police Lt. Lance Haight said. "I do remember him once commenting that BART had never had an officer die in the line of duty and how fortunate that had never taken place."

An emotional BART Police Chief Kenton Rainey said the department was in shock over Tuesday's death of Smith, a 23-year veteran and the first BART officer killed in the line of duty in its 42-year history.

"We're numb. Please give us some time to grieve," Rainey told reporters at a news conference in Oakland.

Smith was shot while authorities searched an apartment in Dublin for a smartphone, laptop bag and related items stolen during a recent armed holdup at a train station in Oakland. Police believe the suspect — identified as John Henry Lee, 20 — committed several robberies on BART property.

BART Police said in a statement Wednesday that the San Leandro Police Department arrested Lee on Jan. 16 after an automobile burglary and subsequent chase, which ended when the suspect lost control of his vehicle and collided with a tree. The previous morning, Lee allegedly stole a number of items at gunpoint while in the Fruitvale Station parking garage.

Rainey declined to disclose any further details about how Smith was shot, deferring those questions to the Alameda County Sheriff's Office, which is investigating the shooting.

Authorities were trying to determine whether an officer's weapon discharged accidentally, or if Smith was mistaken for someone else, Alameda County sheriff's Sgt. J.D. Nelson said. Either way, it was an accident, he added.

Rainey declined to name the officer who shot Smith but said he was "extremely upset."

"We want to give him and his family a chance to come to grips with what's going on and what's happening," he said.

Wearing bulletproof vests, the officers began the search by knocking twice on the door of the apartment, Nelson said. The knocks went unanswered, but the door was unlocked, so four BART officers— including Smith— stepped inside with their guns drawn, Nelson added.

"If your door is unlocked, it usually means that somebody's there, so I'm sure that was in their mind that somebody was in the apartment at the time," he said.

Nelson declined to elaborate on the shooting but said an officer fired at least one shot.

Smith, 42, of San Ramon was in charge of the BART police detective unit. He is survived by his wife, also a BART officer, a 6-year-old daughter and two brothers who are also in law enforcement in the San Francisco Bay Area, Rainey said.

BART police have been the center of other controversies. On New Year's Day 2009, Oscar Grant III, an unarmed black passenger, was shot and killed at the Fruitvale station after reports of a fight.

Officer Johannes Mehserle, who is white, was convicted of involuntary manslaughter and sentenced to two years minus time served.