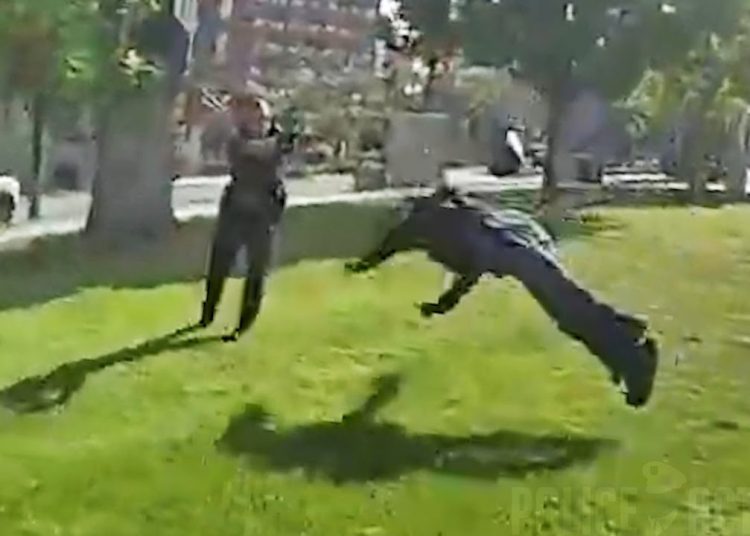 Salt Lake City, Utah — Salt Lake City police released video on Thursday showing two officers fatally shooting a man who ran at them with a knife in Pioneer Park earlier this month. Officers responded to the park around 8:45 a.m. on June 10 to investigate a report that a women had been stabbed. As officers arrive, men who had been assisting the woman pointed out 39-year-old Rezek Yaqub Yahya sitting about 100 yards away from them in the park beneath a tree.

“She said that guy did it?” an officer asks as he approaches a shaded area near the street, where medics are helping the woman. She’d been stabbed in the stomach and arm and was bleeding heavily, according to a 911 caller.

“That’s what she said,” someone responds.

The officer says, “All right. Well, let’s go find (him).” And he and his partner walk into the park.

Video shows that Yahya stands when he notices the officers. One officer sees Yahya has a knife in his hand.

“Yo, put the knife down,” he says, continuing toward Yahya. Yahya doesn’t respond and walks toward the officers.

The officer tells Yahya to put down the knife twice more over the next 10 seconds. Then he tells his partner to get out his Taser. Almost simultaneously, Yahya runs at the officer’s partner.

The officer again yells for him to drop the knife and to stop running. Yahya doesn’t. Four seconds later, Yahya has nearly closed the distance between officers and is still sprinting.

The officers fire several times, hitting Yahya who falls and careens forward with his hands in front of him. He lands within a few feet of one of the officers, who has also fallen down.

After the shooting, video shows that the officers try to get Yahya to let go of the knife in his hand.

Yahya died at the scene.

The identity of the woman has not been released. She was critically injured but is expected to survive.