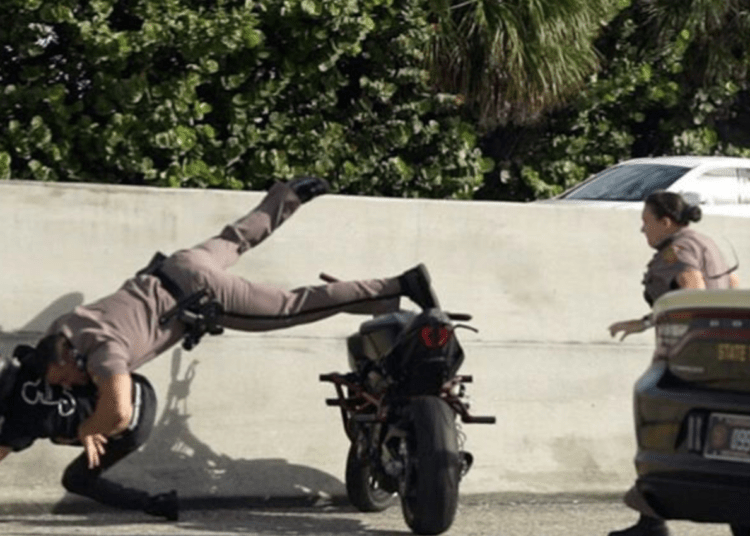 DELRAY BEACH, Fla.  — Florida Highway Patrol troopers appear to be chasing a motorcyclist, all while hundreds of other riders were participating in what they’re calling a breast cancer charity ride out.

Heart-pounding moments caught on camera show the dangerous takedown that happened Sunday in the southbound lanes of I-95 near Delray Beach.

At one point, troopers can be seen trying to stop the bike with their cruisers and it knocks him to the ground.

Moments later, the rider attempts to get back on, CBS12 reported.

That’s when one trooper is seen charging towards him, then leaping over the bike head-first, taking the suspect down to the ground.

Kyle James of Empire Visuals Stunt captured the whole thing and shared it to CBS12 News and via Twitter.

This is awesome.
No idea where this comes from.??‍♂️

My fed pal in Florida sent me it on WhatsApp.

“I just think they rushed to the front of the pack. He was at the front. He was one of the first people they got to, and was trying to run him off the road and he got hit,” James said.

Another rider from California says he is lucky to be alive.

“It could’ve been way worse than it was. It could have hit more people in the crowd. It was in front of us, and there were hundreds of people riding,” she said.

She also shared photos to CBS12 News, but does not want to be identified.

“I’m just glad he’s alive, because he slid a couple of feet. He could’ve broken his bones easily. And on top of that, his adrenaline is pumping, the cop just tackled him unknowingly if he’s injured or not,” she said.

James also shared video of what he says was a breast cancer charity ride.

In the video, riders can be seen doing wheelies and risky stunts. He admits they even run red lights.

“I’m not trying to justify it at all. It’s not legal,” James said.

And their high-risk riding comes with consequences, which are known.

The apparent suspect, the rider who was seen knocked down, tells CBS12 News via social media he’s doing OK, but couldn’t comment further.

It’s unclear what charges, if any, he is facing.

It’s been an issue for years in Palm Beach County, where drivers call 911 and police have ticketed riders who are driving off-road vehicles on public roads.

“We’re out there having fun and sometimes the cops do get upset,” James said.” Sometimes it looks like we’re getting out of hand, so they want to make a point, but that’s not how you do it.”

FHP has not returned CBS12 News’ requests for information and it’s unclear if they were targeting the driver that was struck.