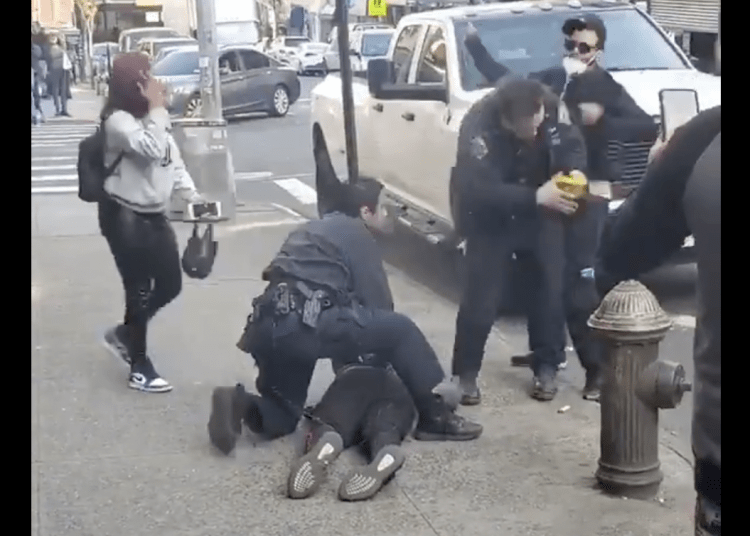 NEW YOIRK – A man wearing a medical face mask was caught on camera sucker-punching an NYPD officer in the Bronx Tuesday night as the officer’s partner was taking a robbery suspect into custody.

Nelson Jimenez, 31, was identified as the man who launched the blindsided haymaker, according to the New York Post. His attack occurred in front of a crowd of bystanders who had gathered on a sidewalk near 183rd Street and Davidson Avenue in University Heights to watch the arrest of 27-year-old robbery suspect Yoemdy Castro, law enforcement sources said.

One officer in the video can be seen holding Castro to the ground, while another stands nearby.

NYC people are dying, and suffering as COVID-19 plagues thousands but the same scumbags continue to roam the streets of NYC and attack NYPD cops. Sadly the wrong people are suffering. Welcome to DeBlasios NYC pic.twitter.com/St6UoXV9wZ

During the episode, Jimenez walks behind the upright officer, then delivers a blow to the head, knocking off his winter cap, the video shows.

The officer who was struck immediately turns around and fires his Taser, but it doesn’t succeed.

Jimenez then flees, with the officer on his tail.

Sadly, spectators can be heard cheering on the suspect, imploring the him to “run.”

However, officers later caught and arrested Jimenez in a nearby bodega, law enforcement sources said. Charges against him are pending.

Meanwhile, during the commotion, another officer who responded to the scene was also punched in the head in an off-camera incident, according to sources, the Post reported.

The suspect in that assault, Brandee Isom, 25, was arrested and charged with assault and obstructing governmental administration, sources said.