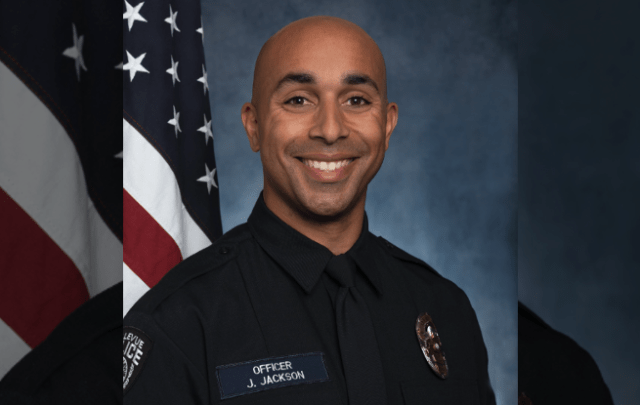 BELLEVUE, Wash. – The Bellevue Police Department in Washington announced the death of Officer Jordan Jackson. He suffered fatal injuries in a crash on Monday.

“We are saddened to report that 34-year-old Officer Jordan Jackson died from his injuries in a collision early Monday morning while on duty,” Bellevue Police wrote on Facebook. “Officer Jackson has been a valuable member of the Bellevue Police Department since 2018. After two years on the force, Jackson transferred to the traffic unit as a motorcycle officer. He was recently honored as employee of the quarter for his excellent quality of work and service to the community. His supervisor commended Jackson for his leadership in the department and eagerness to take on additional responsibility.”

“It was determined that the Bellevue police motorcycle Officer Jordan Jackson was traveling northbound on Bellevue Way and a vehicle entered Bellevue Way SE from a parking lot on the east side of the road which the motorcycle officer struck,” WSP Trooper Rick Johnson said in a news release Monday night.

Johnson said the investigation has shown that neither speed nor impairment were factors in the traffic fatality.

@wastatepatrol detectives investigating a collision that resulted in the death of a @BvuePD motorcycle officer. pic.twitter.com/dhtnF20pgY

Bellevue Police Chief Wendell Shirley expressed grief that is being experienced by the entire organization.

“We are devastated by Officer Jackson’s tragic death,” Shirley said. “Our hearts go out to his wife, two children, his family and friends, and extended BPD family as they grieve. This is a huge loss for the entire community.”

Jackson worked as an EMT, volunteer firefighter, and a member of the King County Sheriff’s Officer Search and Rescue Volunteer K-9 Unit prior to becoming a police officer in March 2018.

He grew up in Spokane and graduated from Issaquah High School and Central Washington University. He leaves behind his wife and two young children, the department said.

Bellevue Police said funeral arrangements are underway and will be announced once they are finalized.