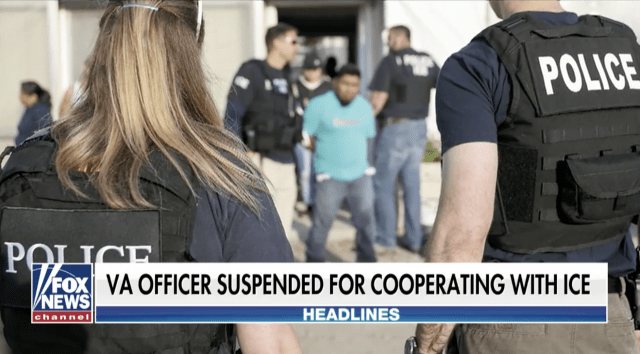 FAIRFAX COUNTY, Va. – A Virginia police officer was “relieved of duty” after turning over a suspected undocumented immigrant to federal authorities following a traffic accident last month, according to police.

The Fairfax County Police Department didn’t identify the officer in a statement released Tuesday but said the incident occurred on Sept. 21 when an officer was dispatched to a vehicle collision.

While on scene, the officer discovered one of the drivers didn’t have a Virginia driver’s license. As a result, a check was made with the state Department of Motor Vehicles, police said. The inquiry revealed the driver had a violation for failing to appear for a deportation hearing.

The officer verified the warrant and alerted officials with Immigration and Customs Enforcement (ICE), which apparently violates department policy.

An ICE agent was close by and arrived at the scene. The officer cited the driver for not having a driver’s license and turned the person over to the federal agent.

The Fairfax County Police Department enacted a 2007 policy that prohibits officers from confirming a person’s immigration status and detaining them solely based on civil violations of immigration law.

“This is an unfortunate issue where the officer was confused,” Police Chief Edwin Roessler Jr. said. “We have trained on this issue a lot. This is the first time we’ve had a lapse in judgment, and the officer is being punished.”

What one-person calls a “lapse in judgment” another believes “job well done.” Sadly, too many chiefs and sheriffs view cooperating with ICE agents as partisan politics. However, cops in the trenches simply view it as getting the job done and keeping communities safe.

The driver was released from federal custody after three hours and ordered to wear an ankle monitor. Roessler apologized for the incident and ordered an internal investigation upon learning of it, Fox News reported.

“Our county is one of the most diverse counties in the nation and no one should have the perception that FCPD is acting as a civil immigration agent for ICE,” he said.

The officer involved has been on the job for a few years, Roessler told The Washington Post. He added that the officer did not willfully violate the department’s policy with respect to cooperating with immigration officials.

He said the officer will undergo remedial training.

Military couple gunned down outside their Virginia home