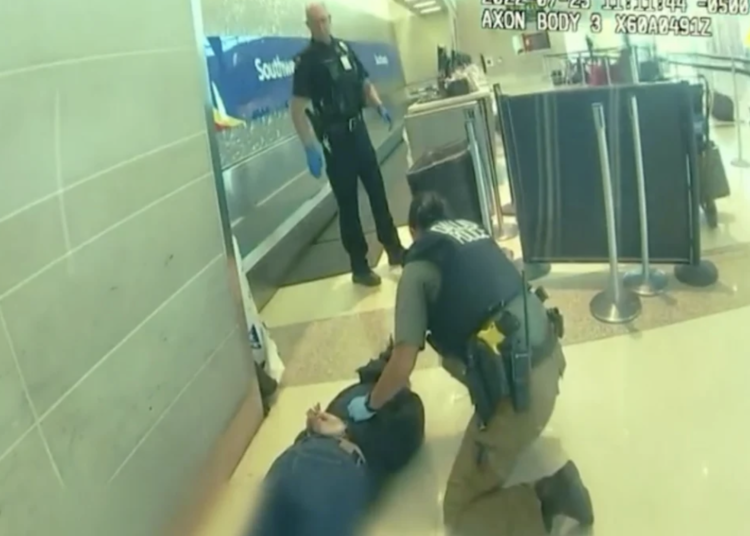 Dallas police released video Tuesday of the incident involving a woman who fired a gun at Dallas Love Field before an officer shot her. The woman, wearing a black hoodie, looked to be aiming the weapon in the air late Monday morning before she bought it down and pointed it straight, prompting 15-year Dallas police veteran Ronald Cronin to shoot immediately.

The surveillance video was played with no sound. Passengers in the terminal could be seen in a panic, running away, taking over and hitting the floor.

“I’m very proud of him,” Police Chief Eddie Garcia told reporters, referring to the officer. “If it was appropriate, I would have given that officer a medal right here in front of all of you today.”

Before the woman pulled a gun, she told bystanders she had an announcement to make, police said.

The suspect” started to ramble, talking about a marriage, incarceration and that she was going to blow up the airport and then pulls a handgun from her sweatshirt,” Garcia said.

She fired “multiple rounds” into the ceiling at 11:06 a.m. CT before Cronin ordered her to drop her weapon, Garcia said.

That’s when the woman lowered the weapon and pointed it toward Cronin and a bystander, Garcia said.

Garcia praised his officer’s fast work in bringing down the armed woman before anyone else could be harmed.

“The goal is to neutralize a threat. You have to shoot to stop the threat,” Garcia said of the officer, who fired eight or nine rounds, striking the woman multiple times.