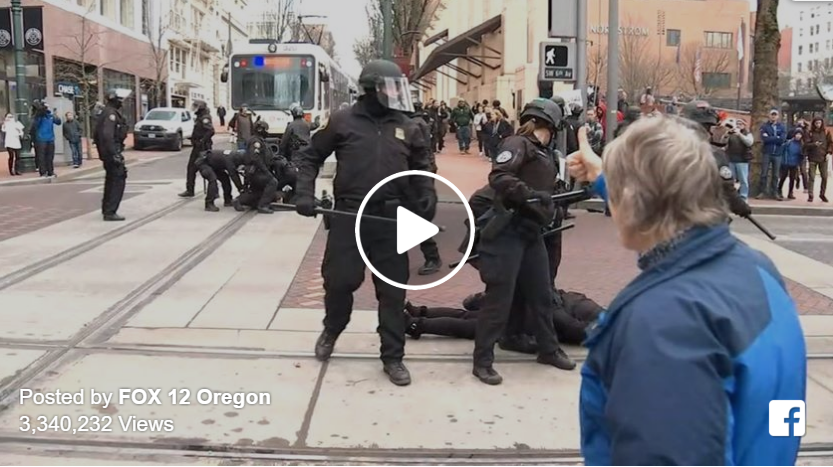 Portland police responded quickly and decisively to a group of protesters blocking traffic in the city Wednesday, running one of them right into the ground in dramatic footage posted online.

About a dozen police in riot gear approach the scene of the protest in the video posted to Facebook by a local outlet, where agitated bystanders had gathered around the protesters as they blocked traffic. One man had climbed onto the front of the bus. “Here they come,” one onlooker says excitedly.

The actions come a day after a group called on the firing of Portland Police Chief Mike Marshman for using crowd control measures on a crowd on inauguration day.  Here is the letter sent to the Mayor.

On January 20, 2017, the Portland Police Department and the City of Portland, knowingly and intentionally set out to incite violence on the streets of Portland. They created confrontation where there was none and then attacked citizens with chemical weapons, concussion grenades and rubber bullets.

On that night, the police systematically blocked EVERY path that the peaceful crowd attempted to take. They attacked us first on the Burnside Bridge then they deliberately corralled us into Pioneer courthouse square where they gassed us – men, women, children, everyone – they hit us with concussion grenades, rubber bullets and batons.

Ted Wheeler, fire Chief Marshman by Tuesday or nothing moves on Wednesday.

You only rule by our consent, we are about to stop consenting.

The march, which did not have a permit, assaulted police before they responded with pepper spray, tear gas, and rubber bullets.
Read More