The heroic agent is a member of CBP’s BORTAC Unit 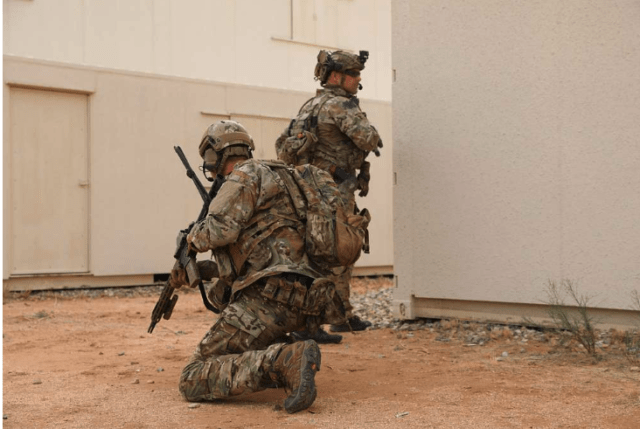 UVALDE, Texas – The mass murder suspect accused of gunning down 19 students and two teachers at Robb Elementary School in Uvalde, Texas on Tuesday was killed by an off-duty Customs and Border Protection agent from an elite tactical unit, according to the New York Post.

The unnamed agent rushed into the school while the gunman — identified as Salvador Ramos, 18 — was still active and began exchanging rounds with the suspect, who was barricaded inside a fourth-grade classroom, NBC and Fox reported.

The heroic agent is a member of CBP’s Border Patrol Tactical Unit (BORTAC). He was injured during the shooting but managed to “eliminate the threat” and kill the shooter before he could commit more carnage, law enforcement sources told NBC.

The agent is part of CBP’s Del Rio sector, which covers Uvalde. BORTAC trains in a manner similar to U.S. special forces, and they are taught to handle terror threats abroad and other chaos, such as riots at ICE detention facilities, NBC reported.

Although officials are not revealing the shooter’s motivation, reports indicate he went on the deadly rampage after apparently fighting with his grandmother about his failure to graduate from high school, according to a reports.

A neighbor of Ramos told local news channel Newsy that the 18-year-old got into an argument with his grandmother, whom he shot before going on the killing spree that left 21 dead.

@Newsy's @JohnMone gives an update on the deadly Uvalde, TX school shooting and shares what a local neighbor told him in regards to the suspect. pic.twitter.com/bv0sDIaJPb

The neighbor, identified by the outlet as Eduardo Trinidad, said Ramos was upset he was not going to graduate from Uvalde High School.

“He got into an argument with the grandmother and she was screaming, ‘He shot me! He shot me!’ and then he got in the car, zoomed down the street, there was some kind of crash, according to Mr. Trinidad,” Newsy reporter John Mone said.

“The suspect got out, he had two weapons, and then started engaging gunfire,” he added.

After hearing a commotion on Tuesday, Trinidad headed over to the grandmother’s home, where other neighbors relayed to him the details of the feud, he said.

The mass murder is the deadliest shooting at a U.S. grade school since a gunman killed 20 children and six adults at Sandy Hook Elementary in Newtown, Connecticut, nearly a decade ago, Fox News Digital reported.

Meanwhile, the identities of most of the victims is trickling out less than a day after Tuesday’s massacre.

Eva Mireles, 44, was a fourth-grade teacher at the school. The educator was remembered as a mother and a wife with an “adventurous” spirit.

“She was adventurous. I would definitely say those wonderful things about her. She is definitely going to be very missed,” said 34-year-old relative Amber Ybarra, of San Antonio.

Fourth-grade teacher Eva Mireles was identified as a victim in the massacre at Robb Elementary School in Uvalde, Texas, on May 24, 2022. (Courtesy of Mireles Family and Lydia Martinez Delgado / Local News X / TMX)

Uziyah Garcia was an 8-year-old student. His grandfather, Manny Renfro, confirmed his death.

“The sweetest little boy that I’ve ever known,” Renfro said. “I’m not just saying that because he was my grandkid.”

Renfro talked about the boy’s new found affinity for football.

“We started throwing the football together and I was teaching him pass patterns. Such a fast little boy and he could catch a ball so good,” Renfro said. “There were certain plays that I would call that he would remember and he would do it exactly like we practiced.”

Xavier Lopez, 10, was mourned by family members in Arlington, Texas.

“He was just a loving 10-year-old little boy, just enjoying life, not knowing that this tragedy was going to happen today,” said Lisa Garza, his older cousin. “He was very bubbly, loved to dance with his brothers, his mom. This has just taken a toll on all of us.”

Xavier’s uncle, Benito Martinez, told Fox News Digital that his nephew was a quirky kid, and reminded parents to treasure their loved ones.

“For everybody else that has kids out here, cherish these moments just like your parents cherished you every day,” Martinez said. “Tomorrow’s not promised, so make today worth it.”

Xavier Lopez, 10, was identified as one of the victims. He was in the fourth grade. (Courtesy of the Lopez family)

Amerie Jo Garza, 10, just made the honor roll in her fourth-grade class. Her father confirmed on Facebook that his daughter was killed after a desperate 7-hour search to find her, KSAT-TV reported.

“Thank you everyone for the prayers and help trying to find my baby,” Angel Garza wrote on Facebook. “She’s been found. My little love is now flying high with the angels above. Please don’t take a second for granted. Hug your family. Tell them you love them. I love you Amerie jo. Watch over your baby brother for me.”

Later, Garza noted, “I will never be happy or complete again.”

Her dad: “My little love is now flying high with the angels above. Please don't take a second for granted. Hug your family. Tell them you love them. I love you Amerie jo. Watch over your baby brother for me.” pic.twitter.com/vIMRpjd5sK

Cousins Jayce Carmelo Luevanos and Jailah Nicole Silguero, both 10, were killed, according to the New York Post.

Luevanos’ mom confirmed the tragic loss of both her daughter and nephew in a post of the pair together.

“Fly high my angels. We’re going to miss yall so much,” wrote Veronica Luevanos — whose dad had died just a week earlier. She added three emojis of bawling faces.

Rojelio Torres, 10, has since been confirmed dead by his family. A person identifying themselves as a cousin tweeted a tribute to the boy: “it breaks my heart to say my rojelio is now with the angels I’ll forever miss you and love you my angel.” 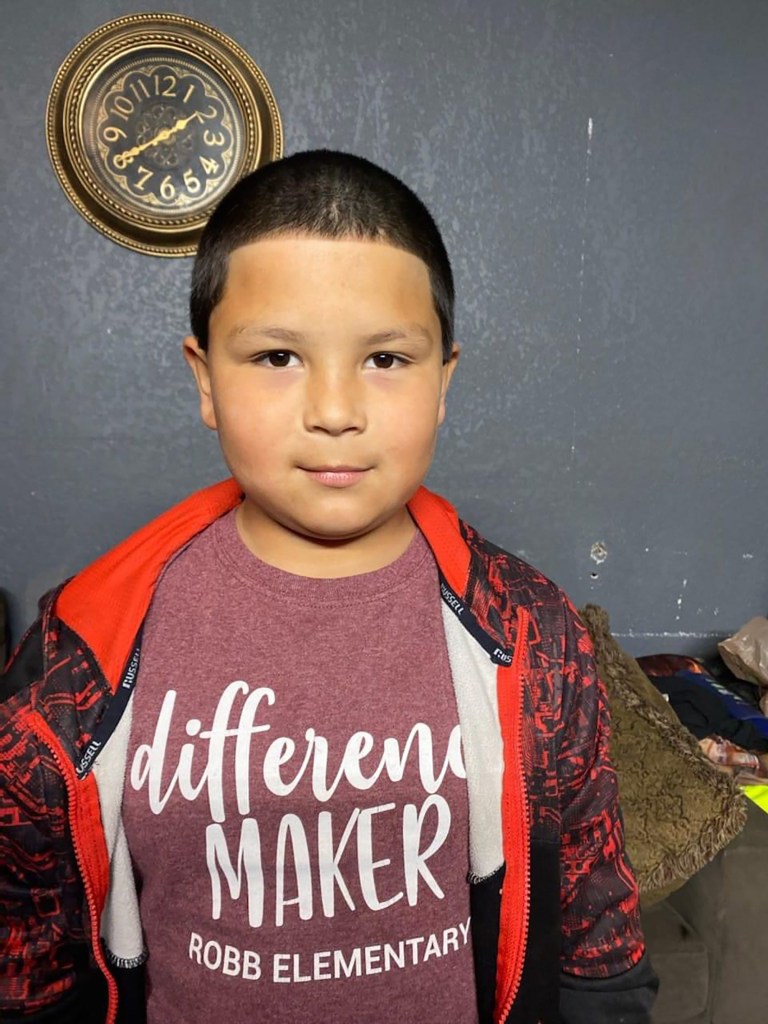 Rogelio Torres’ father was at work when he learned about the shooting and rushed to the school.

Nevaeh Bravo was confirmed dead by a person saying she was the girl’s cousin, the Post reported.

The relative wrote on Facebook: “Our Nevaeh has been found. She is flying with the angels above. We love you Navaeh very much princess.” 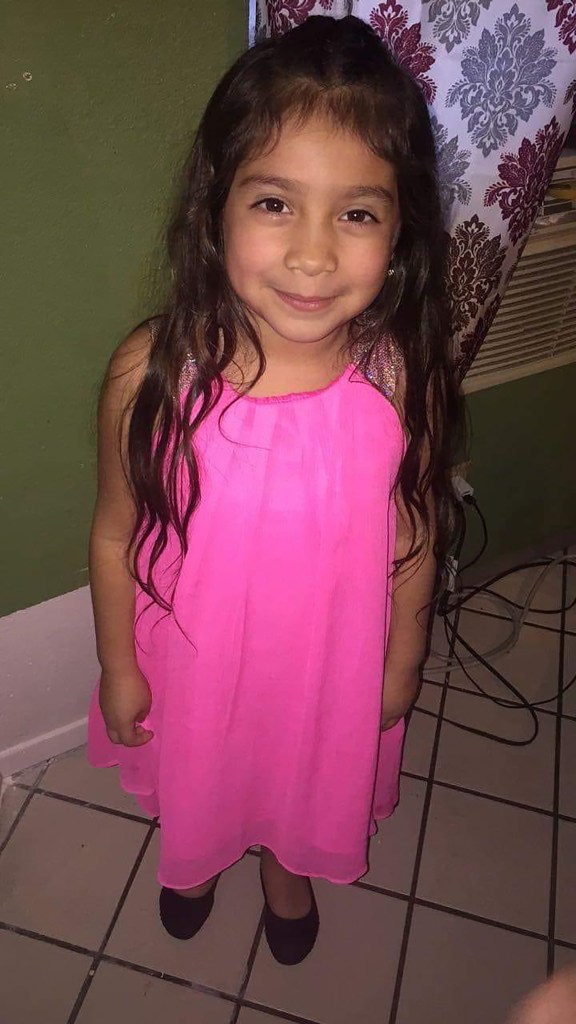 Nevaeh Bravo was confirmed to be among the victims. (Facebook)

Irma Garcia, 46, who co-taught fourth-grade along with slain teacher Eva Mireles, was fatally shot in the attack, her nephew said Tuesday evening.

Garcia had been teaching for 23 years and was the mother of four children, according to her school profile.

Her nephew wrote on Facebook: “My tia did not make it, she sacrificed herself protecting the kids in her classroom, i beg of you to keep my family including all of her family in y’all’s prayers , IRMA GARCIA IS HER NAME and she died a HERO. she was loved by many and will truly be missed.” 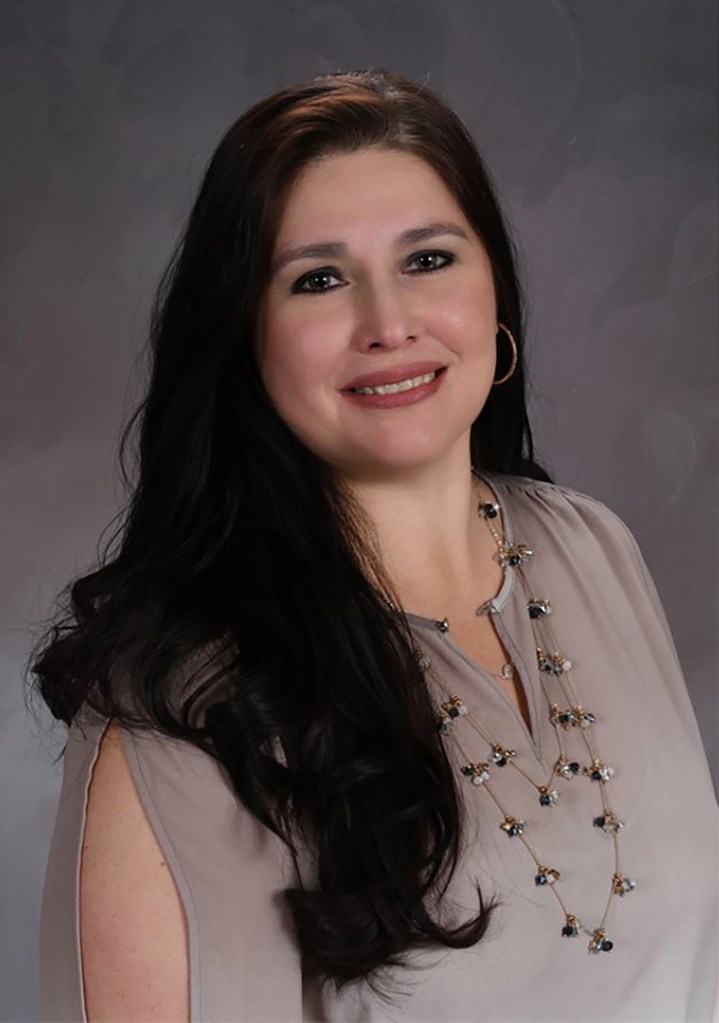 Irma Garcia was one of two teachers killed in the mass shooting.

Makenna Elrod, 10, is confirmed among the victims. Her father had been desperately searching after saying he feared “she may not be alive.” Her death was later confirmed by a family friend.

The mother of Makenna’s friend from tumbling class wrote online: “Sweet Makenna Rest in Paradise!! My heart is shattered as my daughter Chloe loved her so much!!” 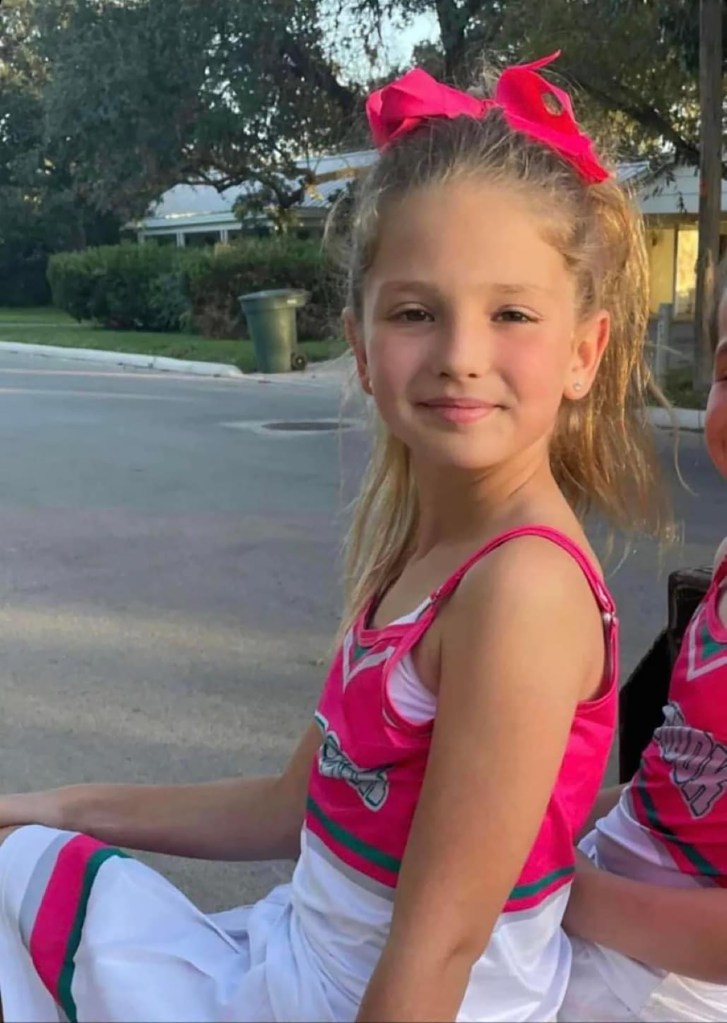 Makenna Lee Elrod did not survive.

The whereabouts of Eliahana Cruz Torres, 10, remained unknown for hours until she was confirmed dead by her family.

Her great-grandfather, Adolfo Cruz, 69, remained outside the school gates through the night, waiting for word about Eliahana. 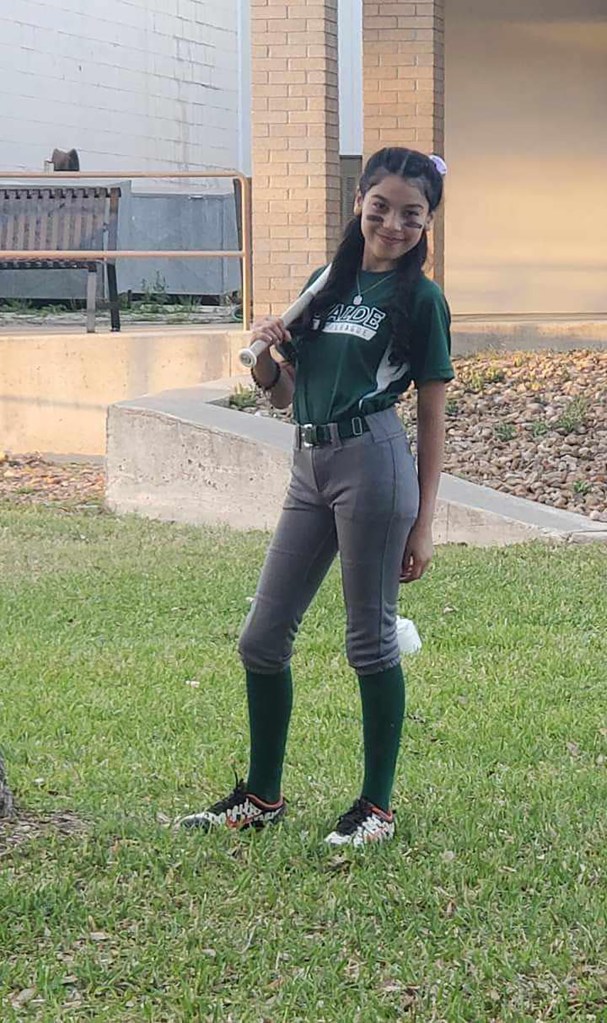 Eliahana ‘Elijah’ Cruz Torres was one of the murder victims.

Annabell Guadalupe Rodriguez, 10, was murdered inside her third-grade classroom alongside her cousin, who has not yet been identified.

Annabell’s father had spent late Tuesday afternoon looking for his daughter. Speaking to KHOU11 he lamented that no one knew where she was.

“They’re not letting us in at the hospital right now so we don’t know where to go,” he said at the time. 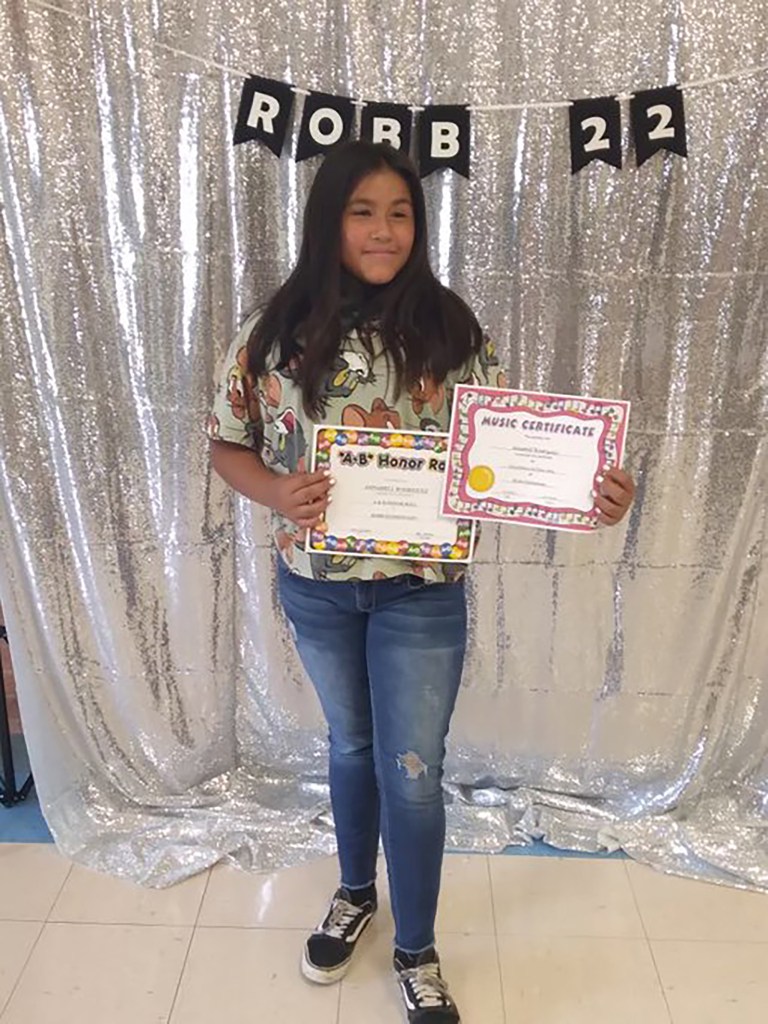 Annabell Guadalupe Rodriguez was among the victims.

The parents of Ellie Lugo, 10, was identified as a victim of the massacre.

“It’s hard to issue out a statement on anything right now my mind is going at 1000 miles per hour… but I do wanna send our thoughts and prayers to those who also didn’t make it home tonight!!! Our Ellie was a doll and was the happiest ever,” Steven Lugo wrote on Facebook. 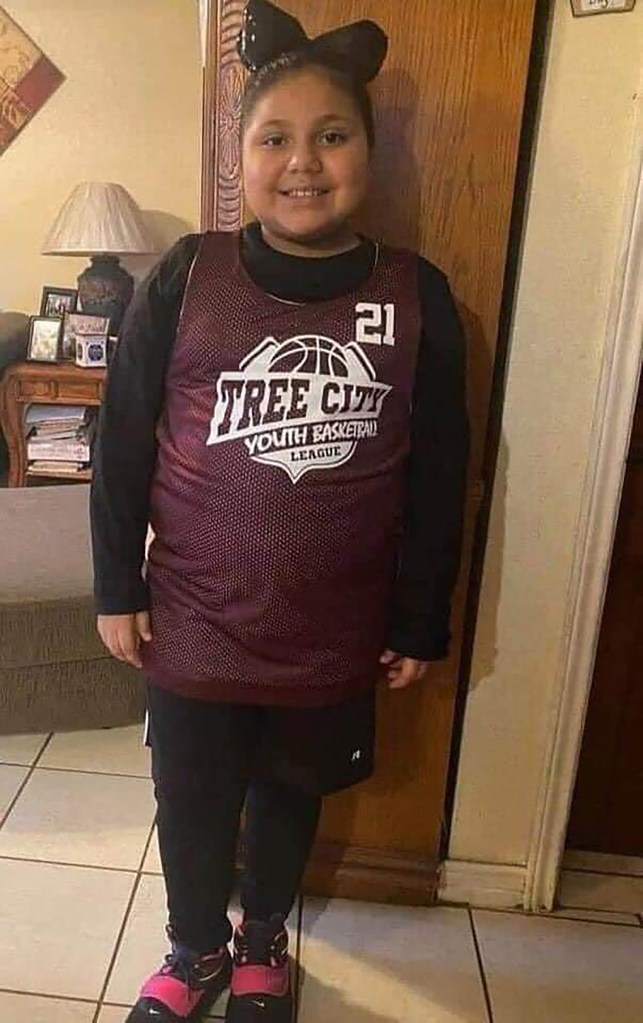 Ellie Lugo did not survive the mass shooting.

Alithia Ramirez, 10, was confirmed dead by her father, Ryan Ramirez early Wednesday with a Facebook page showing her with angel’s wings, the Post reported.

The death of Miranda Mathis, 11, was confirmed early Wednesday in a Facebook post by an older cousin, who that day before had posted a desperate appeal for help finding her.

“My sweet baby cousin we loved u dearly,” Deanna Miller wrote alongside the photo of her cousin now with angel wings.

The mother of Alexandria “Lexi” Aniyah Rubio confirmed the loss of her daughter.

“My beautiful, smart, Alexandria Aniyah Rubio was recognized today for All-A honor roll. She also received the good citizen award. We told her we loved her and would pick her up after school. We had no idea this was goodbye.” 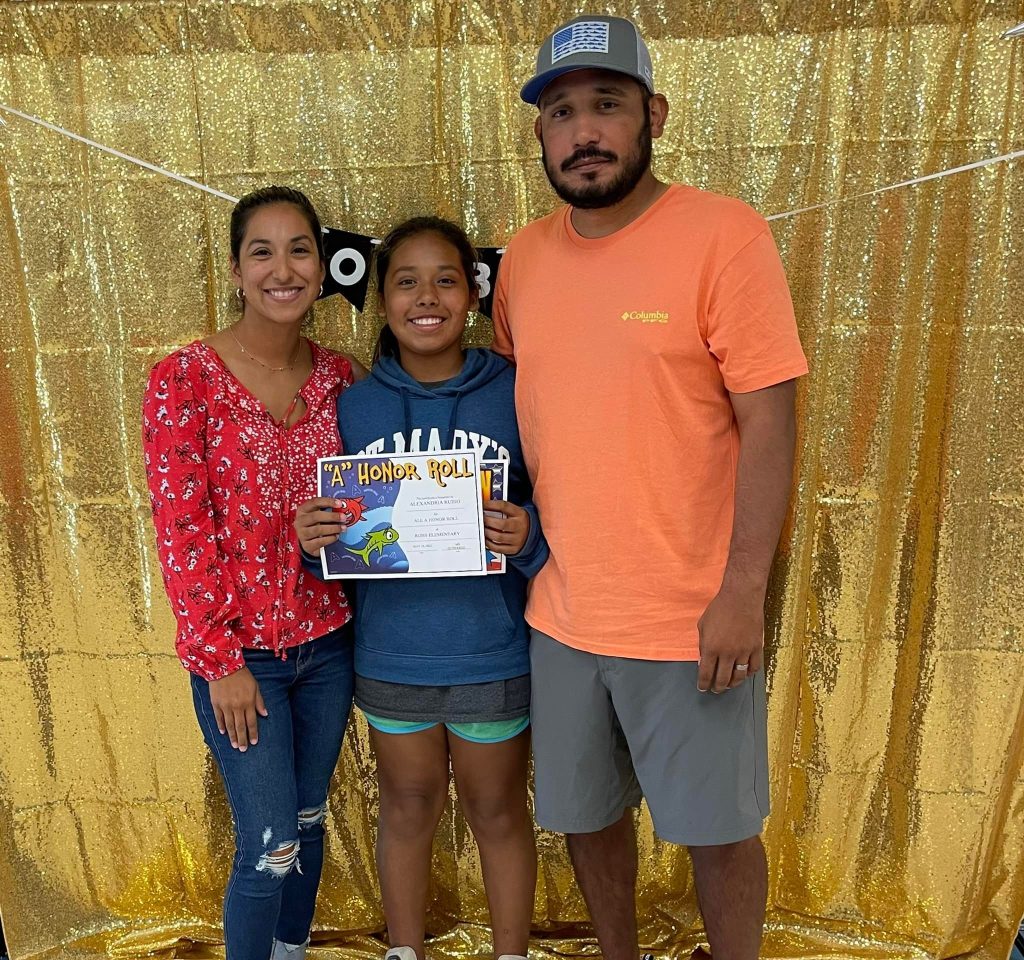 Alexandria “Lexi” Aniyah Rubio poses with her parents hours before she was shot and killed at Robb Elementary School in Uvalde, Texas.

Maite Yuleana, Tess Marie Mata, and Jose Flores Jr., 10, all died in Tuesday’s slaughter, according to the Post. 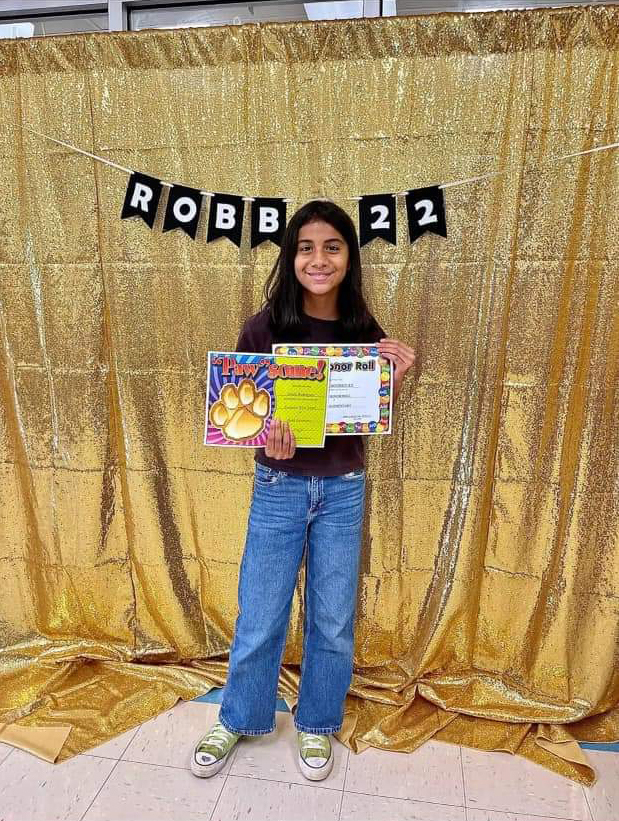 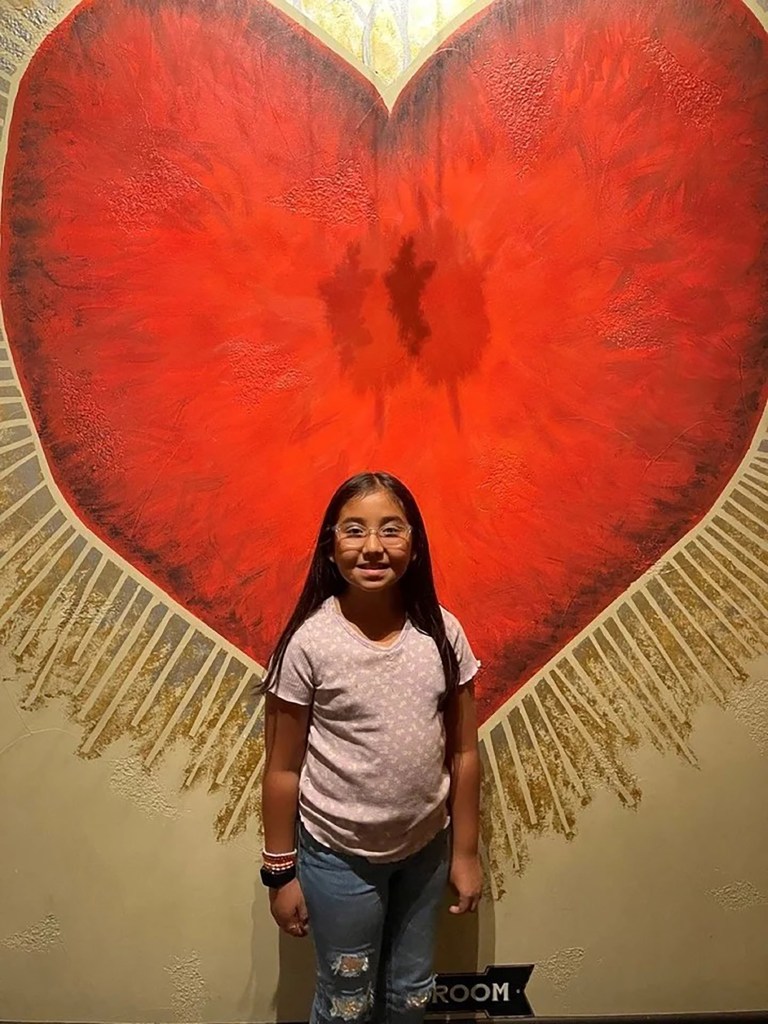 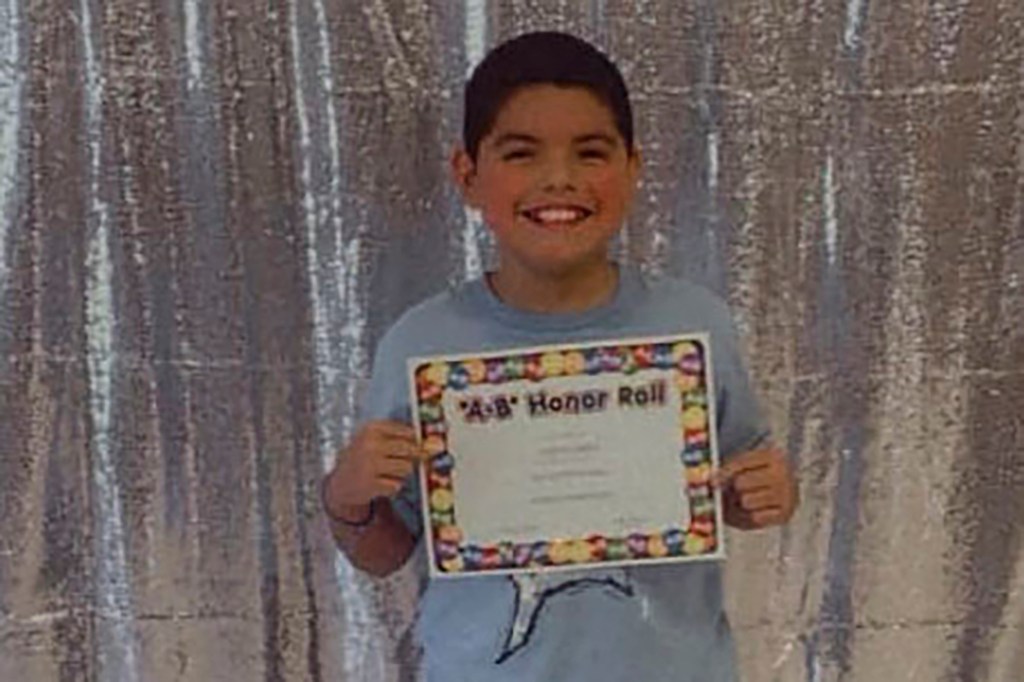