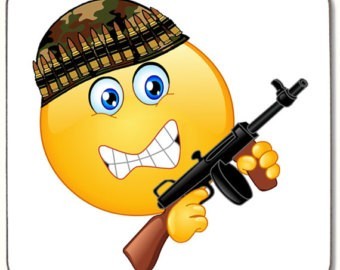 Some people still struggle with expressing a thought within the 140 character limit allowed on Twitter, while others express so much in just three or four characters through the use of emojis or emoticons that they get themselves arrested. Emojis are those tiny pictures we put in our texts to add special meaning to what we’re trying to convey. The word “emoji” comes from Japan—the literal translation is “picture letter.”

This is an emoji to depict the same thing:

In the above examples, the emoticon uses three characters, but the emoji is only one. These days, our smartphones have built-in menus of colorful emojis, giving us a seemingly never-ending supply of smiley faces, kisses, thumbs up and the like, while each one uses only one character on Twitter. In three recent criminal cases, it was one or more emojis that caused prosecutors and/or investigators to ascertain that an additional threat existed.

In January 2015, prosecuting attorneys in the Silk Road case insisted that the inclusion of a smiley face emoticon by defendant Ross Ulbricht was significant. Ulbricht was on trial for acting as the kingpin of darknet drug-trafficking site Silk Road, under the alias “Dread Pirate Roberts.” In an unusual dialog, attorneys on both sides debated nuances in online lexicon. The judge in Federal District Court in Manhattan, Katherine B. Forrest, gave instructions to the jury that it should consider the emoticon and “part of the evidence.”

In many recent cases involving emojis or emoticons, the deliberation has centered around nuances in their meaning. The players are considering the extent of nuance between something like “ha-ha” or “HAHAHA,” These types of expressions in text are being compared to tone of voice or style when speaking. But since text messages are read, as opposed to seen or heard, the gradation in their tone seems more speculative and left up to more variance in interpretation.

Another interesting case involving an emoji happened in Canada, when freelance journalist Fletch Babb was investigating Instagram’s black market subculture for an article he was working on. During the course of his investigation he came upon a rapper in Atlanta who appeared to be selling syrup laced with drugs. Babb tried to set up a purchase, then seven text messages later, he went quiet. The rapper/drug dealer wasn’t happy and threatened Babb to try and get him to honor the deal. Posting on Babb’s Instagram account, the rapper’s threatening message included a dead smiley emoji with a gun pointed at it.

In a screenshot from Osiris Aristy’s Facebook page, the use of a few emojis amounted to a terrorist threat against police officers in court.

Justin Patchin is a professor of criminal justice at the University of Wisconsin and is also co-director of the Cyberbullying Research Center. Patchin was quoted on Mashable.com as saying that a reasonable person would be threatened by that image: “When law enforcement investigates, they have to determine whether a person would have been reasonably threatened.”

And it was law enforcement officers who felt threatened themselves in New York City when 17-year old Osiris Aristy posted on Facebook that he felt “like katxhin [sic] a body right now.” Shortly after, Aristy used a racial slur to threaten the police, followed by three gun emojis pointing at a police officer emoji.

Other news articles report that Aristy has boasted on social media that he owns a gun and that police also testified to seeing a selfie he posted with a gun in his waist band. Given that and the recent horrific murders of two NYPD officers, it’s no wonder that officers everywhere are hyper-aware of social media threats, especially when directed at their colleagues. Aristy was later charged with making terrorist threats with his emojis, though he was indicted on other charges.