The suspect was also wanted in a home invasion robbery 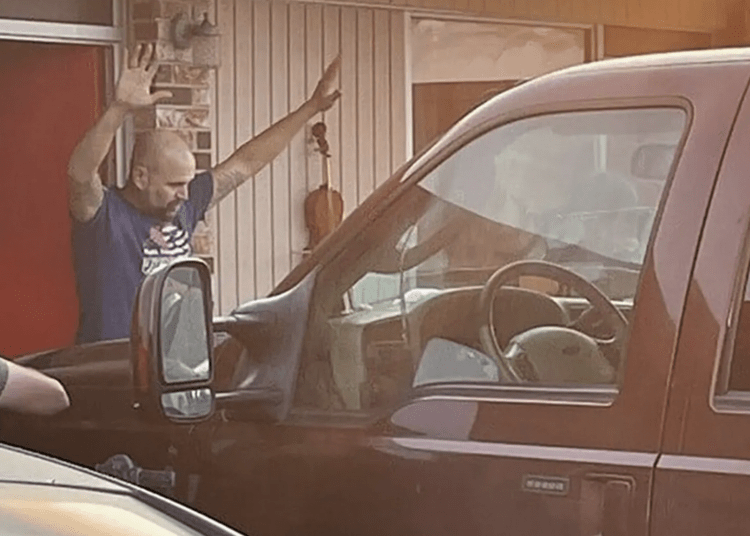 Royce Wood was arrested without incident at an Arkansas motel after he allegedly shot a Texas police officer earlier this month. (Wise County Sheriff's Office)

MOUNTAIN VIEW, Ark. — Law enforcement authorities in Texas had been searching for a man they say shot a Rhome police officer during an investigative stop Sunday night, June 13.  The officer along with Wise County deputies detained two people on a motorcycle. They were suspects from an earlier home invasion robbery in the area, Law Officer reported.

Royce Wood was identified as the suspected shooter of the officer during the stop near the intersection of Farm-to-Market roads 407 and 2264 in the small town of New Fairview, Texas, about 30 miles northwest of Fort Worth. Wood, 43, was riding a motorcycle with a female passenger when they were pulled over.

Following a manhunt that lasted 11 days, U.S. Marshals in Mountain View, Arkansas, on Thursday arrested Wood. Also taken into custody was his girlfriend, Tiffany Caswell, 32, according to reports.

Wood and Caswell were tracked down and arrested together without incident at a motel after authorities received a tip, according to the Wise County (Texas) Sheriff’s Office, FOX 4 reported.

“It wasn’t like what you see on TV, all these explosions and stuff. It was just very coordinated,” said Chief Deputy Dammon McGilton of the Stone County (Arkansas) Sheriff’s Department. “They used safety equipment and they approached the door and announced their self. He came to the door and he surrendered and he was taken into custody without incident.”

Wood and Caswell were both suspects in a home invasion robbery on June 12, which occurred near New Fairview, FOX 4 reported. The crime led to their detention during the traffic stop the following day, where Wood is accused of shooting the Rhome (Texas) police officer in a leg, according to authorities.

The shooting of a police officer triggered a Texas Blue Alert that led to a statewide manhunt. Investigators said Wood fired several rounds at the officer before the couple fled the scene.

“Thankfully, the officer is improving and will be able to return to duty in the not too distant future,” Wise County Sheriff Lane Akin said.

Sheriff Akin extended his gratitude for the work involved in capturing the duo.

“We deeply appreciate the efforts of our good citizens, the absolute tireless dedication of WCSO, Rhome PD, state and local law enforcement officers, and first responders,” Akin said. “Special thanks to the U.S. Marshals and Texas Rangers for their relentless work ethic and helping us bring this search to conclusion.”