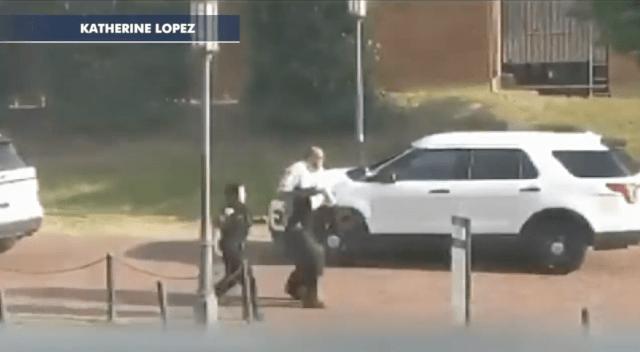 CHARLOTTE, N.C. – The suspect in the deadly shooting on the campus of the University of North Carolina at Charlotte on Tuesday was reportedly charged with two counts of murder and other charges as authorities search for a motive.

Anyone with information on this case can call @CLTCrimeStopper pic.twitter.com/7DDc7YrJ8P

The suspect’s grandfather Paul Rold of Arlington, Texas, said that Terrell and his father moved to Charlotte from the Dallas area about two years ago after his mother died. Rold said his grandson was attending UNC-Charlotte.

Police Chief Jeff Baker told reporters late Tuesday that campus police received a call about a suspect who was armed with a handgun. Moreover, the suspect “had shot several students.” Officers arrived on scene within minutes. As a result, the suspect was disarmed and taken into custody, reported The Charlotte Observer.

The suspect shot a total of six people. Of those six, two were killed while three remain in critical condition with the fourth suffering from non-life threatening injuries, Baker said. Students were among the victims, but officials would not say how many, Fox News reported.

The school’s Office of Emergency Management (OEM) tweeted just before 9 p.m. on Tuesday that a lockdown across campus was still active, despite the Charlotte-Mecklenburg Police Department tweeting that the scene was “secure.”

Before 6 p.m. the OEM said that shots had been reported near the school’s Kennedy Building. “Run, Hide, Fight. Secure Yourself immediately,” the office tweeted.

North Carolina Gov. Roy Cooper was quickly briefed on the situation at UNCC, according to his Twitter account. Vi Lyles, the mayor of Charlotte, tweeted that news of the shooting was shocking.

Librarian Laura McShane told The Charlotte Observer that she was working at the school’s Atkins Library when she “heard a ruckus” nearby.

“Students were running down the hall right behind my office,” McShane said. “I was about to go out a shoosh them (to be quiet). I had no idea something like that was happening. Almost immediately a student said there was a shooter on campus.”

Consequently, she quickly took seven students into her office in the library. Furthermore, she noted that “it happened so fast I nearly closed the door on one student.”

Baker clarified to reporters that the suspect was not at the campus library, but that he did enter a building on campus.

The university has more than 26,500 students and 3,000 faculty and staff.  The campus is located northeast of the city center and is surrounded by residential areas.