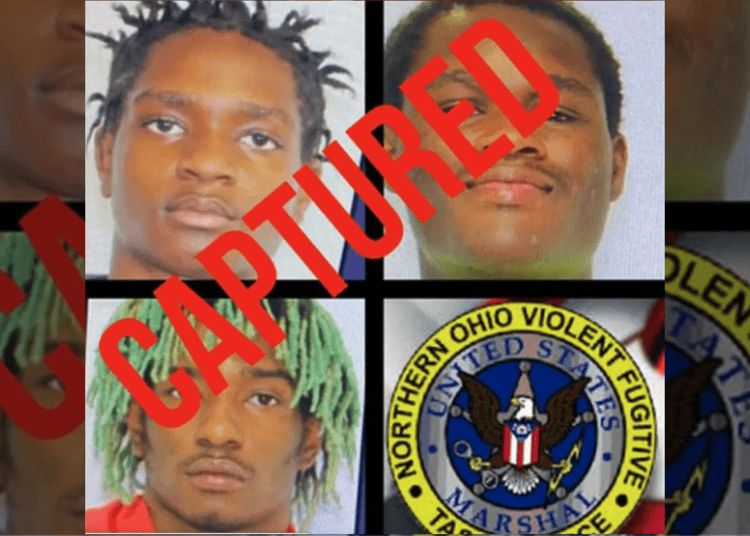 From bottom to left — Tyler Stafford, Donovan Jones, and Deshawn Stafford Jr. were arrested in connection to the Ethan Liming homicide. (US Marshals Service)

AKRON, Ohio – Three suspects have been taken into custody in connection to the fatal beating of Ethan Liming outside a LeBron James-founded Ohio high school in early June, federal authorities announced Saturday.

In a homicide that has generated national interest, Liming, 17, was found beaten to death on June 2 in the parking lot of  I Promise School in Akron.

On June 2, Liming was savagely beaten to death about 10:46 p.m. Authorities confirmed that he died due to blunt force trauma to the head after he drove around with his friends and shot a water gun at people.

Liming was pulverized so badly that he was pronounced dead at the scene after police found him lying on the ground in the parking lot, officials said, according to the New York Post.

“I am happy to report that today, officers with the Akron Police Department, made several arrests in connection with the death of Ethan Liming. We thank the members of the community for their outpouring of support that helped investigators throughout this investigation,” said Akron Police Chief Stephen Mylett in the news release.

“While I believe the news of the arrests will be welcomed by Ethan’s family and loved ones, we all recognize that nothing will bring Ethan back,” he added. “Violence in this country must stop. We are losing too many lives to senseless acts of violence.”

Police said “that in the moments leading up to the incident, one or more occupants in the [Liming]’s vehicle were riding around the surrounding area shooting a SPLATRBALL Water Bead Blaster at objects and possibly unsuspecting people,” according to a statement cited by Fox News.

They then drove to the basketball courts, where the group of teens “targeted or approached the subjects who were on the court and fired the gel soft gun at them,” in an act that apparently provoked the brutal slaying.

“This crime impacted an entire community and we stand alongside the community in seeking justice for Ethan,” U.S. Marshal Pete Elliott said in a statement.

Akron Mayor Dan Horrigan said that Liming’s “senseless and tragic death has touched every person in our community.”

“My thoughts and prayers remain with the entire Liming family at this time,” he said.

Liming’s father, Bill, told Fox News in a story published earlier that his son had a “bright future” ahead of him with plans to become a lawyer.