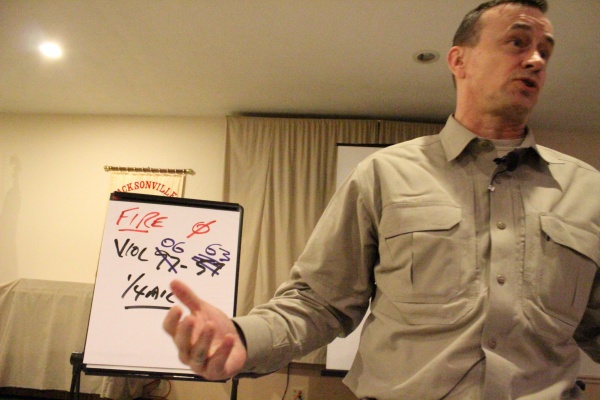 Lt. Col. Dave Grossman (above) is an excellent resource on this issue

Communications with police officers worldwide confirm we all face the same issues of lawlessness and violence regardless of the nation, state or community we serve. These reports illustrate both victory and disaster in our fight. The many officers murdered or disabled prove our need for continued and upgraded training.

This article addresses basic physical and psychological preparation issues I believe are vital to establishing an officer’s ability to meet unlawful violence with lawful and justifiable force in the course of sworn duties.

Our police language has evolved to describe matters of life and death with terms framed in legalisms. Unwarranted concerns about legal liability cloud the thinking and thus the survival of too many officers. I have heard officers say they will not use their firearm because they fear being sued. These officers are essentially saying they are more afraid of being sued than murdered.

Yet when I poll officers during use-of-force training classes and ask those who have been defendants in a civil case claiming excessive use of force to indicate what they’ve lost financially, the answer is nothing. Not a single penny paid out of any officer’s pocket, no lost homes, no lost savings. What they did lose was peace of mind; they suffered the anxiety of the unknown. Officers must recognize it’s extremely unlikely they will lose anything when they act justifiably within law and policy. That recognition must come from training that explains the legal realities of the aftermath of a deadly force incident.

Officers must not place their lives in danger due to an unwarranted fear of lost property or savings accounts. Unfortunately, many officers have not received needed information or in-depth training to prepare them psychologically for the violence of the street and the legal and emotional aftermath.

Will: The Critical Element

A critical part of the police survival equation is gaining and maintaining fighting skills. Yet physical skill has no value without the will to carry out life-saving actions. Officers who wait too long to act in the face of a clearly identifiable and immediate deadly force threat may never get the chance to defend themselves. They may be the finest shooters, the fastest runners and the best grapplers, but to no avail. Failing to act can and has led to disaster.

In class, I often ask officers if doing nothing is doing something. If an armed offender refuses to release a pistol and stands unmoving in the face of repeated commands, is he doing something? Yes, some say, he’s gauging you, readying for the attack, checking your willpower. Indeed, that’s frequently the case, and at the very least, such a thought process will enable an officer to make appropriate tactical moves and not stand exposed or subject to a potential cross-fire.

Prepare to face danger by developing the core belief, through training and thoughtful deliberation, that self defense and personal safety are the foundation of our work. Officers who train in issues of law, policy and tactics move into harm’s way with confidence and competence. They radiate obvious and subliminal power, a level of officer protection predators sense and smell. It’s a shield and a sword every officer can acquire. It takes nothing more than will.

Next, we must examine the cause and effect of our verbal communication. How we speak and the language we choose not only communicates what we want to say, but also sends a message of who and what we are. Reports from interviews with police murderers and attackers clearly indicate offenders gauge an officer’s assertiveness, determination and grit.

At times, verbal assertiveness requires a loud, commanding style that leaves no questions. Avoid profanity. As NYPD Sergeant (ret.) Phil Messina’s work with his Modern Warrior organization clearly demonstrates, witnesses develop their recollection based in large part on what they hear. Commands ending with “mother-#@%*&!” leave witnesses with a recollection of an out-of-control, enraged, unprofessional officer.

At the same time, although polite language is the norm in everyday police work, it holds little value in a fight. In fact, I believe it may prove counterproductive to officer safety. We must train to join line-in-the-sand thinking and speaking to create line-in-the-sand action. The officer must, without ambiguity, tell the offender what to do and what will happen if he refuses. Continuing to address a violent offender as “sir” may well be viewed by such an individual as weakness and thus precipitate or escalate an attack.

During training, I ask officers to describe whom they address as “sir” or “ma’am” in every-day life. The answer: people whom they respect or honor, not those they seek to do violence against. So, if they speak to an offender in terms of respect, how does that affect their mental ability to lawfully and justifiably direct violence against the offender? I believe it degrades such action.

When offenders say, “Shoot me” or “Kill me,” whether armed or not, officers too often retort they don’t want to harm them. Officers often view these persons as victims rather than violent threats. But by saying they will not harm the offender, officers psychologically disarm themselves, leaving themselves open to an attack they cannot defeat by reaction.

Such words offer the offender the opportunity to close the distance and act out. The offender may indeed be suicidal, but suicidal persons have taken officers’ lives. An officer must tell armed offenders that if they move to carry out violence against the officer or citizens, the officer will shoot or take any necessary action. Example: “Keep back, do not move. If you force me to shoot, I will do so.” This prepares the officer and draws the line. You do X, and I will do Y. No ambiguity, and no confusion at the subconscious level.

Disagree? Watch the horrific squad-car video of the young deputy murdered in Georgia shown throughout the law enforcement community. (It’s titled “The Murder of Georgia Deputy Kyle Dinkheller,” and you can buy it at www.lineofduty.com.) You can’t convince me that murderer did not test the deputy’s resolve to do violence. We can be too nice, too gentle and too accommodating to those who wish to murder us.

Train to speak in clear, concise terms under pressure. Be professional. Practice commands in realistic training simulations, and do not give the offender permission to harm you by appearing weak or by offering dangerous freedom of movement. Example: “Put down the gun” is a dangerous command allowing the offender freedom of movement and possible freedom to shoot you if you fall into the presumed-compliance trap noted trainer Tony Blauer details on his Web site (www.tonyblauer.com). If the command affords the offender the opportunity to harm you, then such a poor choice of words/tactics may possibly be your last. A SWAT officer in the Southwest told me how an offender armed with a handgun feigned putting the gun down when ordered to do so. As he moved his arm lower, he fired and hit the officer in the head. A grazing wound saved the officer from death.

Finally, just as fine motor control in the fingers and body fails under stress, so too do fine language skills. Whatever verbal command you choose, keep it short and clear, and draw the line. Example: “Police. Do not move, or I will shoot you.”

After verbal communication comes physical presence, demeanor and action. A show of weakness invites attack. Failing to make and hold eye contact, for instance, signals weakness. Police officers must not permit outright disrespect without challenge. To do so looks weak in the eyes of those who contemplate violence against us. Following law and policy, fair but firm words and action must be our method.

At the same time, officers must know the line between a commanding presence versus a challenging or a taunting one. Attempts to stare down an offender, for example, may prompt an attack. Recognize that many antisocial criminals harbor no fear of you because of your position. They don’t fear prison. Many do fear or respect the concept of overwhelming force, but not all. Those who have no regard for their personal welfare are the most deadly enemy. Challenging an offender’s manhood or honor invites confrontation.

Physical presence sets the tone for safety. Slouching, relaxed, at-ease body position makes an officer appear unaware, unprepared and easily preyed upon. FBI research of police killers confirms that many criminals make such observations and act on these visual cues. Some offenders have commented on shooting badges and uniform ribbons. A clean pistol or an expert-shooter pin may indicate to a potential attacker the officer is not easy prey.

Standing with your holstered handgun turned toward an offender offers up a gun grab. Offenders have noted their observation of equipment and the care given to it ill-kept or dangerously positioned gear signals an easy victim. Remember: Physical appearance and equipment upkeep is a choice.

Finally, supervisors should inspect their officers’ equipment and monitor their conduct on the street. Sergeants are the front-line supervisors for the street officer. With the proper training, skill and desire, they can make the greatest impact on officer safety and survival.

I’ve written many words to make one point: Each of us largely controls our own safety and destiny. While our agencies should provide guidance and support, we will fail to achieve our best level of preparation if we depend only on the time and training they give us. It’s simply unrealistic to expect departments to offer the necessary time and money to build high levels of personal skill.

The best departmental training efforts can and will establish a foundation of information and provide drills to practice, but without a commitment to continue on to excellence, officers’ skills will diminish, and they will forget life-saving information. We must spend our own time to ensure our best chance at a safe and successful law enforcement career. It may cost personal dollars, but the payment you receive in return for individual training and preparation may well be your life.