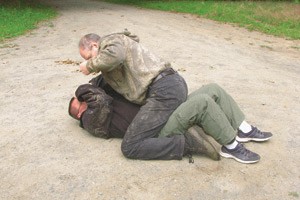 Ever since the Brazilian Gracie family and its Ultimate Fighting Championship (UFC) took the United States by storm in the early 1990s, police officers and trainers could not avoid the brutal truth that many if not most physical altercations go to the ground.

This unchallengeable fact, and the indisputable superiority of ground fighters over stand-up fighters once on the ground, forces the entire defensive tactics and law enforcement training communities to find a ground-based defense solution. And this solution must be practical for most officers, not just the martial-arts practitioners within our ranks.

In a nutshell, we face a problem we can summarize as follows:

Yet we have an obligation to provide our officers a solution to ground defense, a situation in which they will inevitably find themselves. Some agencies have incorporated UFC-style ground fighting into academy and/or in-service training in the face of this challenge. We now see the wholesale adoption of UFC-style technique into some law enforcement curricula. In some very progressive agencies, officers learn the intricacies of the mount, guard, uppa and so on.

These efforts are leading to exactly the results you d expect. They produce moderately skilled sport-fighting practitioners who can hold their own against an equally skilled, single, unarmed opponent of the same sex in a one-on-one competition on a flat, empty surface (so long as certain rules, such as no eye jabs, are enforced).

Police officers generally are older than the assailants they fight, and often not in as good shape. Officers are not pumped up with illegal bloodstream chemistry. They usually must react to a sudden attack by an assailant and find themselves on the ground by surprise. Once there, they are at great risk of losing their lives at the hands of an attacker who hasn t read the UFC rules. And often their attacker is plural; that is, there are several of them.

We, as a community, need an approach to ground defense that mitigates the advantages our attackers have as much as possible. How? With weaponry.

We carry one or more lethal-force weapons, and one or more less-lethal weapons, so that we can fight any fight with a higher force level than our opponent. It makes no sense to teach only empty-handed, sport-based, ground-fighting techniques to police officers. On the assumption that a suspect who has us on the ground is trying to either kill us or do us grave injury, we must also teach practical ways to access and deploy weapons while on the ground. The fly in the ointment of this common-sense suggestion is that in many ground struggles, the weapons we carry on our duty belts are inaccessible because the opponent is on top of us.

Joe Maffei, a Boston-based martial artist of some repute and trainer of NHB (no-holds-barred) competitive fighters, has formulated a weapon-based system of ground-fighting that addresses the constraints police officers live with. Called the Quick-Draw System, it s simple and can be performed effectively by even older and overweight officers. (Maffei calls the system beer-belly friendly. )

The Quick-Draw System employs a weapon in a somewhat old-fashioned way: on an ankle. An officer carries a gun on the inside of their strong-side ankle, with the butt facing forward. (By contrast, an ankle holster traditionally is worn on the inside of the weak-side ankle, with the butt facing back. In this position, the weapon is most easily accessible to a strong-hand draw when seated or standing.)

I also should note that the Quick-Draw System works equally well with an ankle-worn knife. The new TDI Ankle Knife from KA-BAR Knives is ideal for this application. More agencies restrict the carrying of second guns than knives by on-duty officers.

One Quick-Draw technique is illustrated in the accompanying set of photographs. In Photo 1, an officer is in what is generally regarded as the worst possible ground position: with his attacker in the guard, i.e., on top of and straddling the officer. (We are assuming the attacker is not a highly trained ground fighter, which is evident in the fact that he has not pinned the officer s ankles with his legs.) The first step an officer must take is protect against face and body blows by bumping the attacker forward and onto his hands, as shown in Photo 2. This is accomplished with a hip thrust and knee strikes.

Once the pant leg is in hand, the officer kicks out their leg, as shown in Photo 4. This action pulls up the pant leg, exposing the gun or knife worn on the strong-side ankle. (Attempting to pull up the pant with the hand proves much less effective than kicking the leg forward.) Once exposed, the officer can access a weapon when the attacker is off balance. (See Photo 5.) Finally, once in hand, the weapon can be deployed, as shown in Photo 6.

From this series of photographs, you can envision why a gun (or a pistol-handle knife) is more easily accessed when worn butt-forward during a ground fight. Worn in this unconventional way, it s still possible to access with either hand when seated or standing, albeit less easily than when worn conventionally. This technique is not, of course, fool-proof. It does require some skill and practice.

Again, the technique shown here is just one of those in the Quick-Draw System. As with all hands-on combative techniques, size and strength count, but weapon-based and simple, the system gives officers a chance, certainly more than empty-hand, sport-based techniques.