'When you get down in the mud to fight a pig, you get dirty, and the hog enjoys it' 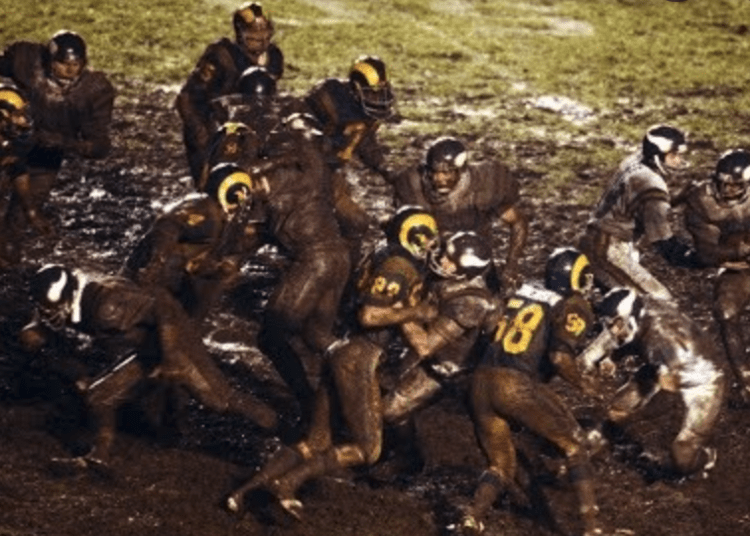 There’s an old Law Enforcement maxim about having to physically fight a suspect:

“When you get down in the mud to fight a pig, you get dirty, and the hog enjoys it.”

In this story, all the cops enjoyed it.

Early in the 1980’s, (and therefore early in my police career), the SFPD and other agencies bought into the concept of putting together sports teams (such as full contact football) as a way of raising funds for cop charities, and of course establishing bragging rights between the involved Chiefs of Police.

The football players thought it was fun to actually get to officially tackle and throw people violently to the turf.

The SFPD had a team called the “Centurions” named after the iconic LAPD Police book by Sgt Joe Wambaugh, “The New Centurions.” Other less savory and politically incorrect names were abandoned.

The official team got snazzy uniforms, helmets, protective pads, and other major perks.

The un-official teams understandably got less.

Mission Station was one such group.

We always played on the weekend before Thanksgiving because it was between government handout check days, and it wasn’t therefore usually very busy.

A lot of the guys had been involved in high school and even college level activities, so there was a rich talent pool to draw from. However, being as how we included anyone silly enough to show up, you’d get to play a few downs even if you got winded getting in and out of your squad car.

Meet the “Mission Station Maulers,” or “the Mud-Puppies,” or “The Company D Cops.”

Note: this last name was very un-official and was pronounced carefully and slowly around our wives and gal pals.

We had some basic rules, and invented others as the game progressed, while the beer kegs got lighter.

The game started with the police chaplain, Monsignor John Healy, offering a loud and incomprehensible prayer in Latin, and then blessing BD’s truck sized ice chest. Healy was in charge of the Irish Whiskey tasting table, which explained the deity invoking monologue at the beginning of the tournament.

This field was due to be re-sodded anyway by the park department crews (who were happily keeping ice and bottled beer flowing), so the zillion gallons of frigid fire department water that shot onto the field didn’t matter much, except to make standing upright and running football plays challenging.

Day Watch vs. Swing Watch was the first contest.

The 0600 crew were the most senior cops on the field. Swing Watch people were more junior, and therefore younger and theoretically in better shape to play in the swamp-like morass at the 19th Ave and Noriega St. playground.

As a favorite bartender friend of mine likes to say:

Swing watch (my team) was deliberately invited to multiple drinking contests by our suddenly generous senior officers, while the “field was getting set up.”

Talk about a set up.

They had a passing game. A lot of our defense was on the verge of passing out.

They ran simple plays. We fell in the mud frequently.

They even had a KICKER!!

(To this day, I think he was a ringer from the Irish Cultural Center National Soccer Team.)

An old adage came to mind:

“Old age and treachery beats youth and enthusiasm every time.”

A typical Swing Watch play would go like this:

Big Paul would snap the ball to My Cousin George, who would then pitch it to the right side. Big Paul, Kenny, and Mitch would futilely try to hold rushers back, and would (usually) trip and fall to the mud in the process. The right side running back, Short Louie, would do a stutter step, and then throw a wobbly wet ball down field to me or Rick, or Blond Ray.

Before the ball flew over the line of scrimmage (BEFORE!), the receivers would either be tripped or tackled.

We actually did make some plays that involved a rugby like scrum where everyone on our team linked arms and ran yelling towards the fire truck that was our end-zone.

By the time halftime was declared over by a suspicious gun shot (that sounded mightily like a .45 caliber colt auto gun being fired into the ground), the score was 36 to 6.

The Mid Watch guys had arrived, and they brought a hospital gurney tricked out into a mobile bar. Frank and Evie from Zukas had an acre or so of hot starchy fried rice ready in white take-out containers set up (and they brought chop sticks!!).

A few of the EMTS got wasted and turned one sleeping drunk colleague into an      all most fully tape-wrapped “mummy,” while my partner Mark had polished off the better part of a bottle of Black Label while sitting at the “score keepers table.”

The SF Park and Rec guys that could still stand let us shower down in deliciously luke-warm water at their nearby office, and the SFFD Heavy Rescue Squad came to rescue Engine 24.

Day Watch Senior Sgt C, being the total class act that he is, handed out small Red Cross bottles of aspirin to the entire mob.