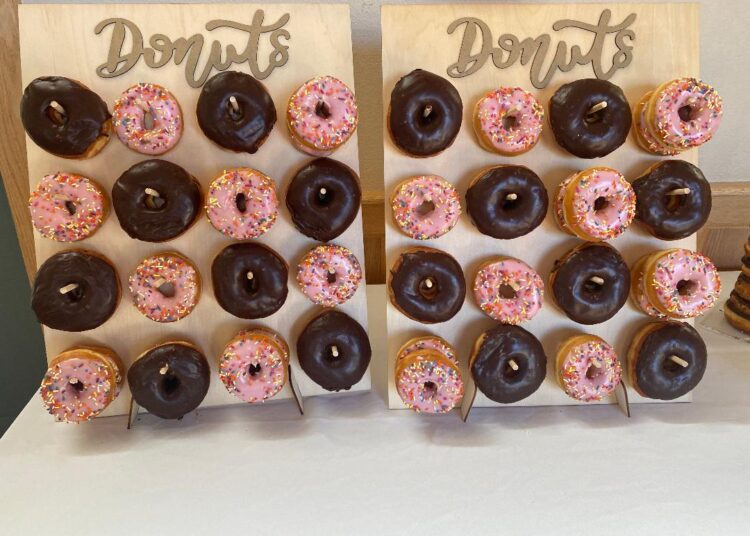 Why do cops always eat at doughnut shops?

Slightly after the invention of the wheel, and way before the sorry advent of “Gluten-Free” everything, if you were working the “dog watch” of 10 p.m. to 6 a.m., you needed to stay awake to do your job.

The question was how to do this without resorting to the long-haul trucker solution of cheap meth tabs (reds) or other similar pharmaceutical solutions? Excessive amounts of caffeine and a high caloric sugar supplemental diet was a logical answer to this dilemma.

After the 2 a.m. “bar-rush” where all the drunks and DUIs got booked, there was almost no place to get decent coffee or any type of food EXCEPT for the all night doughnut shops on the nearest skid row corner.

My long and weary foot beat assignment had two such locations; Hunts Doughnuts at 20th and Mission, and the aptly named Oasis up closer to 16th and Valencia.

The daily routine was simple: Caffeine-load at Hunts, chase the street junkies into their Patel-Hotels, move the thugs, pimps, and hookers onto the next beat (which would then be Southern Police Stations problem, not ours), and then rest up at the Oasis.

If you were reluctantly forced into making an arrest, you had to flag down the 3 David 30 Wagon crew, pour your custodies into the always hot and very smelly main compartment, and then ride standing on the back bumper of the van back to the House.

By then, your coffee was needing release, and the sugar rush was wearing off anyway, so while the House crew booked “the catch of the day” that you brought in, you were jonesing for more liquid energy. (This was pre-Red Bull, after all.)

The Station Keeper Sergeant had a dinged up but still shiny chrome-plated percolator on his beat-up gray metal desk, so when he saw anyone malingering around the booking counter and his proprietary coffee supply, he’d yell at you to “Get outta of here you lazy bums AND GO TO WORK!” Occasionally he’d throw a stapler or tape dispenser in your direction to punctuate his request.

Hanging out in the Station trying to tank-up on his triple-expresso-mix java sludge was therefore not an option.

It didn’t matter where you were in the City, or what color Star you were wearing, it was all the same scene.

A late night at Rocket Doughnuts, or at the Pinecrest Inn was like that famous 1930’s late-night Diner painting, with a uniform cop sitting on a stool next to the cash register, the sobering up inebriates in worn-leather booths draped over the tables like wet laundry, and the hypes and hookers in the far corner closest to the bathrooms.

When my Inspector partner Laurel and I got the Geary Street beat, we’d spend hours upon hours at the Pinecrest planning our next caper, checking active felony warrants, and trading favorite mugshots like playing with bubble-gum baseball cards. It got so that we’d actually have an “office” in a small room behind the kitchen for report writing, back when reports were handwritten in black ink.

The staff at the ‘Crest also got used to us bringing in the occasional (handcuffed) suspect, bookend him in a booth, and then give away a hot cup of coffee and a cheap breakfast. We had found that confessions came easier on a full stomach.

Reporters and writers and other more sober civilians would be seeing cops seemingly sitting forever in a coffee shop, and therefore came to equate late night doughnut palaces with the bluesuits who were only trying to re-caffeinate to fend off the cold bitter mornings.

Over the ages it became cliché’.

Back in the Mission, we had another lesser-known cliché a-working:

It seemed there was a never-ending parade of very attractive, flirtatious, and marriage-ready “girls” working the same hours as the newly hired and suddenly financially affluent rookies at Mission Station.

Whether it was Kismet or Karma, just about every probationary officer who stumbled wearily legged and tired eyed into the Oasis or Hunts after midnight found he suddenly had his own personal female genie who had hot strong coffee, pillow soft glazed cakes, and a sympathetic smile at the ready.

Of course, given the low-cut button top uniforms that the Girls wore, and the fact that they always leaned waaay over the counter to freshen your java, the cracked red formica stools never seemed to be vacant for long.

The married guys like me, and the ones who had steady partners elsewhere, would grab a booth with a view of the door and humorously watch these pre-mating rituals with caustic, incessant, humorous, but accurate cop observations.

Sr. Bernardo Lopez, the fried-dough king who owned Hunts and the Oasis, was happily married to the extraordinary Latina-American diva known to the cops as THE Senoria Lopez. Her name included a mandatory emphasis on “THE” when her name was mentioned because of respect, admiration, and a tiny bit of well-placed caution.

Senior cops at Mission would tell of many allegedly true stories of her that usually ended with; “and then she pulled out a straight razor and took care of business!”

While Lady Lopez was schooling her female cadre on the fine art of how to seductively saunter behind a waist-high counter while carrying a boiling hot metal carafe of Mexican roast coffee, her husband was making sure financial security was in his firm handed grasp.

The multiple blue-gold 7-pointed star decals that covered his chrome plated cash register proclaimed, “I support the SFPD.” To get this message even more clearly across, he would always beckon every uniform that walked thru his doors to “come, sit, have a coffee on the house” at the stool that was 2 inches away from his cash drawer.

The word got out; official SFPD crime stats, and my personal crime journal noted that literally every merchant had been robbed or victimized for almost the entire 18 block stretch of my foot beat. Everyone except Hunts, the Oasis, and the pawn shop two blocks away that sold discounted guns and ammo to “friendly people” (i.e. star holders and their kindred).

All of our football melees were catered by the Lopez family, attended by a Squadron of mini-skirted “Doughnut Shop Cheerleaders.” So also, were the frequent station meetings, birthday and retirement celebrations, and the odd divorce pension sharing fundraiser.

During the ’89 Earthquake, the formal police substation for that area was not surprisingly at Hunts, while the northern Sector Three rally-point was in the Oasis parking lot.

I wasn’t inclined to keep track, but it would be a safe guess to say that over a dozen marriages and an unknown large number of less formal hookups occurred because of a shared late night jelly doughnut at Hunts or the Oasis.

Now pass me that triple-glazed cruller, and who stole the last clean napkins?