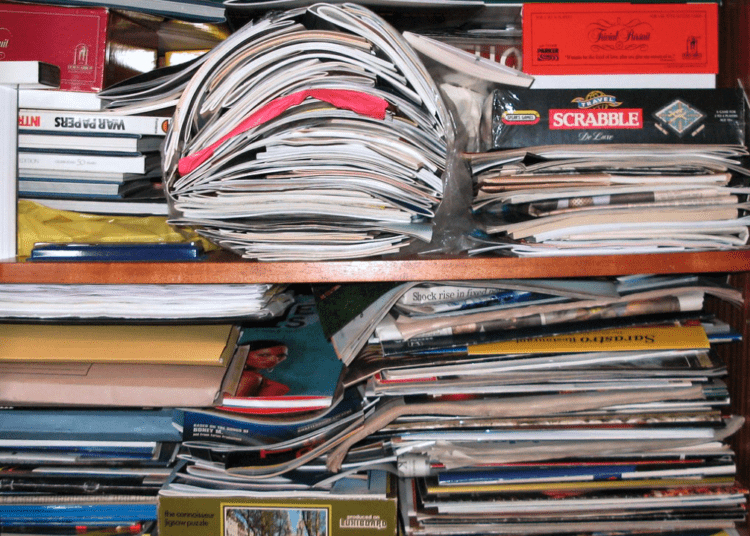 In my considered opinion, the local newspaper was valuable to line the litter box of my girlfriends’ cat, maybe to wrap fish n’ chips from the Edenborough Castle Pub, or to be mulched up to fertilize my transplanted Birch trees.

Until one day I met my first “hoarder.”

One of the most avoided but necessary police calls is for a “welfare check” on an elderly resident.

When you got there it usually went like this:

In that each of these homes all had 11 steps from the curb to the front door, by the time you had climbed to number 5, you’d begin to smell something “funny.”

When you got higher, the veterans would have Vapo-Rub cream on their upper mustached lip, and the rookies would be turning a pale green.

A dark green complexion and clenched teeth would be reserved for when you saw the mounds of dead flies piled up on the interior windows.

Next, call for the fire department to wedge open the door, the medical examiners “body snatchers” to respond, while reflecting that today may not have been a good day to have just had a tuna fish burrito.

Enter the pale-yellow house on 23rd Ave and Ulloa St.

I saw my captain walking down the hall at the station towards me. It was too late to close my office door, turn out the lights, and hold my breath, so I just plastered a “Hi Boss” smile on my face and waited for my day to change.

“Go here, look around, call me.” A crumbled yellow post-it note later, I was headed out.

When I arrived, there were no obvious tell-tale signs to warn me off, so I knocked loudly on the door.

A very tiny ancient sounding Minnie Mouse voice asked me who was I, and what did I want?

I opened the door slowly and was face to face with a 6-foot tall, wall to wall stack of neatly folded newspapers, magazines, and junk mail.

Except for an 18-inch wide near-tunnel, which went to the toilet-only bathroom, to the kitchen, and then to the rear door, every square foot of the place was packed with paper that went above the interior door moldings.

As I looked around, I saw that all of the stacks of un-opened US mail had the name of “Anastasia Corbitt” on them.  I called out that name, and a charmingly twinkle-faced and frail looking female Hobbit appeared at the end of the kitchen pathway.

Before I could say anything, she said, “Come and have tea Dear, I don’t get many men-folk visitors.”

As I sat on a blue plastic milk delivery carton Mrs. Corbitt explained that she was being “pestered” by her relatives to leave her home of 70 years and move into “a dammed cracker-box” downtown.

I was told that her Grandson, (the lawyer), wanted her to sell all her houses and let him manage her money. She also called him sleazy and a shyster.

“Yes Dear, my late Husband worked for the Sunset people as a contractor and took payments in houses instead of cash”.

Hmmm, “About how many houses do you have?”

She leaned over her teacup and said: “Not about, it’s exactly 130 homes and the supermarket on 19th avenue.”

By my reckoning, this sweet Little Old Lady owned about four-square blocks of my district. She talked for at least an hour about times and dreams gone past.

Curiosity is sometimes its own punishment.

As I tried to think of what to do with this 87-year-old multi-millionaire who lived in a hamster cage of her own design, I idly opened a Smithsonian Magazine from 1978, and out fell a clutch of fresh $100 bills.

When I picked up the next issue, and shook it, MORE money fell to the carpet. A blizzard of dead presidents soon covered the floor under my combat boots.

I faked nonchalance and asked my hostess about why she had so much money here, and not in a bank?

“My Children want to control my life, so I just don’t tell them about things that they don’t need to know about. They just are waiting for me to die so they can get my money!”

Following this, she told me that all of her renters mailed her their payments each month in cash. The store sent her bank a cashier’s check and then delivered regular bags of food and supplies to her back door.

While the stacks of printed material that contained uncounted amounts of cash was intimidating, the rotting food and the bags and BAGS of smelly everything-else in the kitchen made my mind up for me.

Mrs. Corbitt, wealthy as she was, could not take care of herself.

I called my captain, as ordered, and then the Office of the Public Guardian.

At my age, I usually don’t let anyone call me “Sonny,” but when Anastasia was gently carried into an ambulance, she clasped my hand, called me that, and then tearily thanked me for taking care of her.

Almost immediately after that, a dark gray Porsche’ Carrera pulled up in front of the house (facing the wrong way) and a tallish guy in an expensive jogging suit rushed up the stairs.

“Hello, I’m ‘Stashias grandson, and I’m here to take charge of her belongings.” He handed me an expensive feeling linen business card, (with the ESQ in bold type), and tried to push past me.

Not so fast me bucko…

I straight-armed the opposite door jam and did a pretty good blocking-back intimation to keep Leisure Suit Lawyer outside.

He bristled and pontificated, but in that I had signed the 5150 W&I order for his Grandmother, I was technically in charge of her belongings.

The advantage to teaching at the police academy was that you got access to “free” labor. I called up my friend Sgt Edie and said that I had an “evidence booking exercise in play” and needed her help.

Yes, nine probies would be enough, and I’d sign the overtime cards.

After assigning the newbies to the required (3) person money-counting teams, and then setting up the required video camera recording devices, I called after Mrs. Corbitt to find that she was doing fine and talking about her “adventure” today.

The grandson actually tried getting in the back door of the house, but when he saw the irritated faces of the uniformed rookies in the kitchen, he prudently decided to settle for threatening me with a massive lawsuit.

The stacks of Chronicle Newspapers from just the hallway netted cash in the low six-figure range, with one 15-year-old Sunday Home Edition having $24,000.00 in cash wedged in its1980 Holiday Special pages.

I kept waiting for Leisure Suit’s court filings. I called the appointed public guardian for Mrs. Corbitt, and she told me that Anastasia had told her greedy grandson, that she would cut them all out of her will if they so-much as breathed in my direction.

I was also told that a large donation to the SFPD Widows and Orphans Benefits fund had been made in my name, in appreciation for my having tea that long summer’s day.